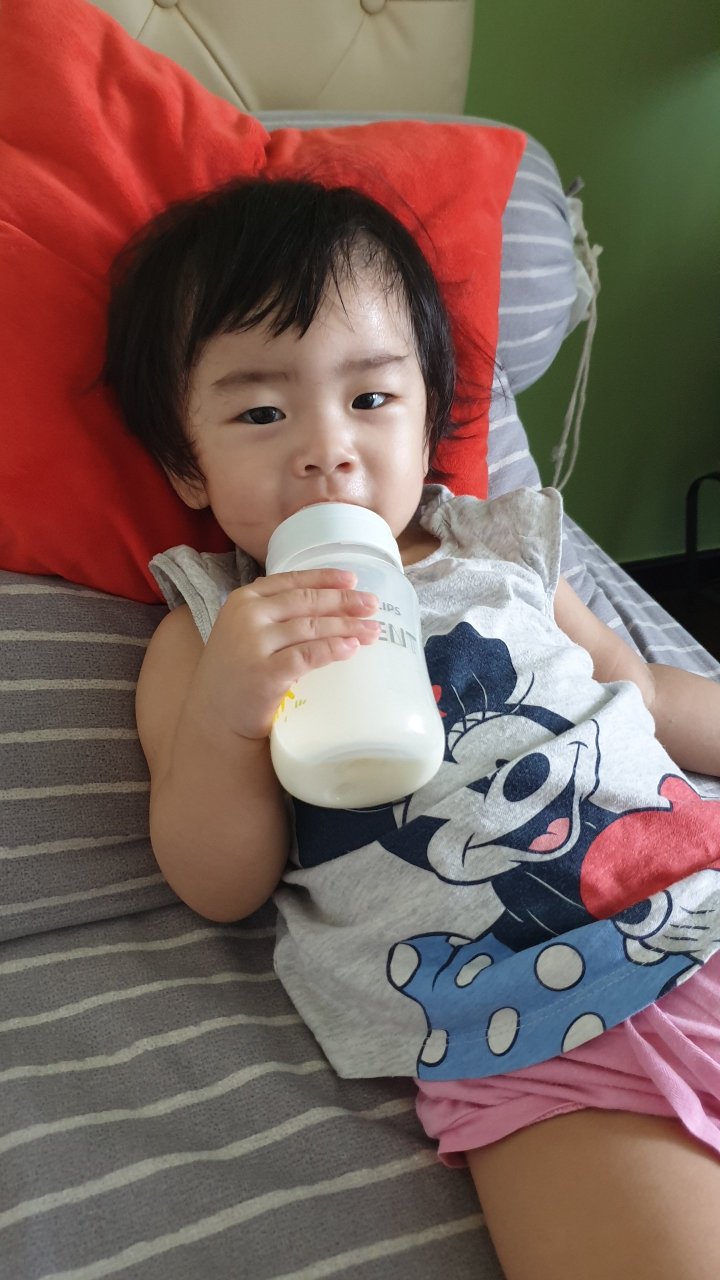 She was supposed to drink before her nap but she fell asleep before we could give her milk.

When she was done, she pulled the bottle out from her mouth, smiled and said to me, “I want more.”

I thought I was hearing things so I took the bottle from her and asked, “What did you say baby?”

“I want more,” she said again, loud and clear.

So I obliged and topped up the missing 80ml for her.

She’s been saying more words now, and stringing words together.

I haven’t been keeping track, because it has been one whirlwind of a ride since June.

She’d be pairing words with “please”, when she needs help to get things done.

It’s kinda cute. Though sometimes she sounds totally demanding and not like she’s asking for help politely. 😂

This morning she said to our helper, “Yaya, make milk please.”

Which totally amused her Yaya.

On one particularly difficult night she was up at 2am and was still going strong at 3am. She suddenly said to me, “Massage please?”

I didn’t understand her at first, until she pulled off her socks and said, “Vicks? Massage please?”

Yep, the boss was asking me to massage her feet at 3am in the morning, with Vicks.

I love watching them do things together.

“Like that also need to take photo?” Quipped the hubs when I quickly snapped this photo of them scribbling on the same scrapbook harmoniously.

Took the girls to see their regular PD on Saturday morning.

Clarissa insisted on wearing their NDP outfit, “because we didn’t get to wear on national day”.

Allie’s been coughing for the past few weeks, and puking quite often. Also her mucus has been coming back in huge waves. The scratch on her face seems to be leaving a scar, gulps.

Clarissa’s been mostly ok, save for the occasional blocked / bleeding nose. We think we are right about her not having HFMD.

So it made sense to get their PD to get them checked.

The visit cost us $317.70 (Thank goodness the hubs can claim) but we feel much more assured after her diagnosis.

Clarissa’s given the all-clear for school – her ulcer is gone and her blister dried up; it is unlikely to have been HFMD.

Allie needs to be on antibiotics because there is way too much mucus, causing backdrip when she sleeps and hence the incessant coughing. 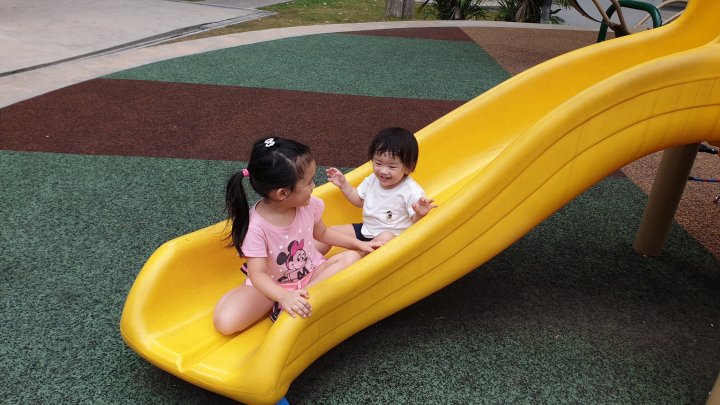 They were so cooped up at home that Clarissa came to me and said, “Mummy, bear-bear says he wants me to take him out to see cars leh. He says he’s very bored.”

So we took them downstairs for a quick playground run.

In fact they’d already attempted to leave the house when I came home from the doctor on Thursday night. 😂

Allie insisted on putting on her shoes when I was out, and the minute I came back and opened the gate, she ran out. 😂😂

Sometimes they can read books together for a good ten minutes. 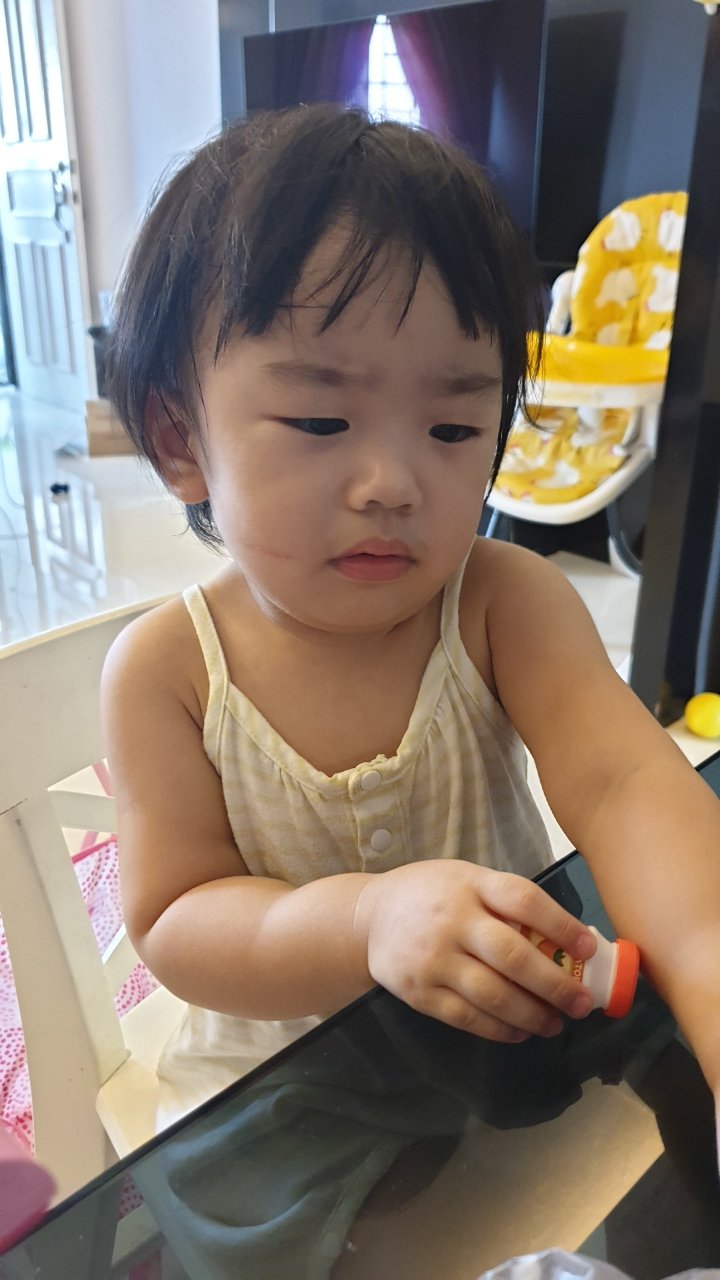 The look on her face when I told her “Xiao Gugu will bring you downstairs to see cats ok?”

My SIL popped by on national day. She’d returned from work trip and had a few hours to go before heading back to the airport to catch her flight to KL for a short vacation.

Allie’s apprehension didn’t last very long because soon they were having a lot of fun together.

Guess where the goalpost is. 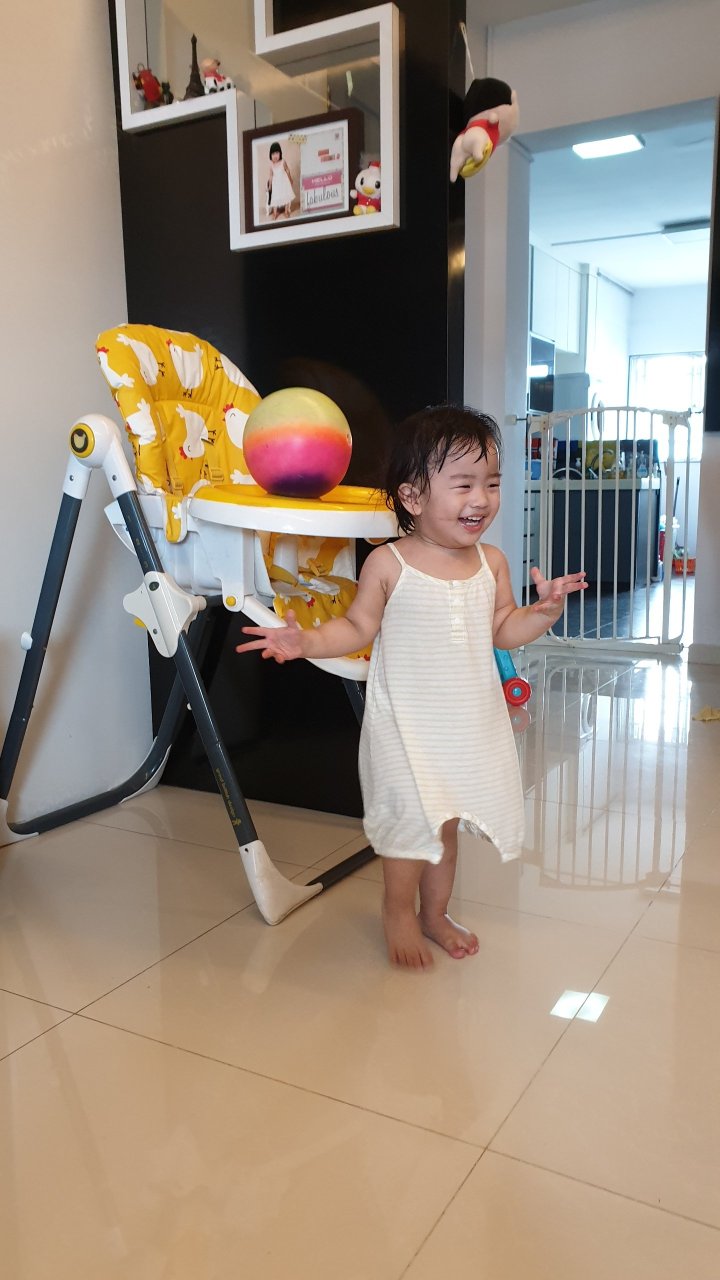 We’ve stopped using the highchair for quite some time now.

Glad it has a new purpose now.

Their version of London bridge, version 2.

Clarissa was the one who suggested that her Xiao Gu-gu played the bridge.

“Huh why am I the bridge?” My SIL asked her.

“Because you are the biggest mah,” Clarissa said, without much of a hesitation. 😂🙊

My SIL would sing “London Bridge” and the girls would crawl under the bridge until she stops singing, and whoever’s still crossing the bridge would get trapped by her.

She’d sing the song really quickly and cautious Clarissa would only crawl through once and sit there laughing instead of going for another round.

“Why you stop there!” My SIL would ask her.

“Because you are going to kiap me!” Clarissa would laugh and protest.

Allie on the other hand just kept going, either not understanding the game or not bothered about getting kiap-ed.

Anyhow I think they had a lot of fun on National Day.

I’ve not watched NDP for years but since having kids I’d at least turn on the TV for them to watch.

My favourite NDP songs are: “One people, one nation, one Singapore”, “We are Singapore” and “Home”.

Pretty much reveals my era. 😆

We started our morning playing these songs on YouTube while the girls watched intently, either because they like the songs or they were intrigued by the (lack of) video quality. 😂😆

One more day before regular programming kicks off again.

I dread returning to office in my current condition.

The meds do control the tummy discomfort but I’ve been having this knot in my throat feeling and my appetite has been really bad.

I guess it’s ok when I’m at home and can wait for the feeling to pass.. but I don’t think it’s possible to have a normal meal or conversation with someone when I’m out.

I guess this is probably my body’s way of telling me I’m stressed out or that I need to slow down.

I pride myself on my ability to stay calm and deal with stress but this time it seems to be matter over mind.

I feel even more anxious now thinking about wtf is wrong with my body.

I’m no foodie but it’s very annoying not to be able to eat anything properly.

So it turns out that tonight would be another potentially difficult night with Allie refusing to sleep and the hubs flaring up at her (and everyone).

Anger and sarcasm is totally lost on a 21-month-old but might have adverse effects on a soon-to-be-5-year-old.

Clarissa curled up in bed and said, “Daddy so scary.”

Honestly I don’t understand why he has to lose his temper like this. He had a proper nap this afternoon so I don’t think he’s tired.

It’s not the first time this is happening anyway and if anything it just adds on to my stress level and that knot in my throat.