Checking in for the week.

My most ardent fan (i.e. the hubs) said he has been checking for updates but it’s been the same thing for the past seven days. 🙊

Woke up and felt that my throat had gotten worse. Not the kind I could fix with herbal tea and TCM powder alone.

Decided to see the doctor and work from home after sending the girls to school.

Saw the doctor, took meds and worked the day away.

By mid day I felt my lips swelling up.

Went out to meet the hubs to pass him his documents for passport collection and had lunch.

Continued working when I got home and my lips felt itchy. I was feeling kinda oozy too.

Went to see the same doctor again after dinner because I wanted to get a different medicine for the flu.

It turned out that the swelling was an allergic reaction.. to an antihistamine wtf.

I’ve always experienced slight swelling on my lips when I take meds for the nose.. it usually goes away after a day. I didn’t realize it was an allergic reaction.

The doctor gave me some steroids to help with the swelling in case it got worse and in case I had difficulty breathing wtf.

He covered me for another day of sick leave. 😅

Continued to work from home.

Check out her cheeky face while waiting for Ah gong to pick up the video call. 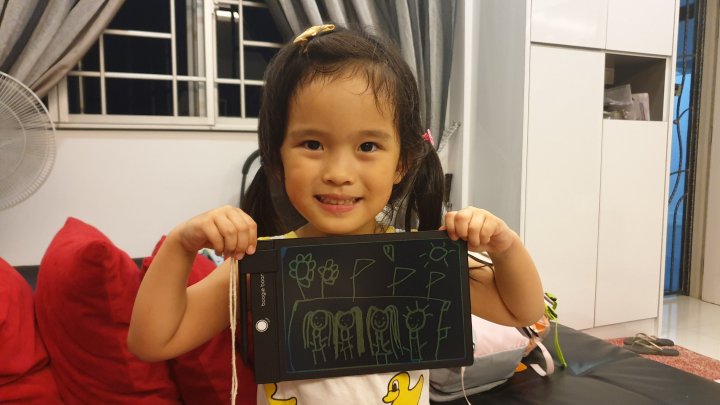 Jiejie asked me to take a photo of her drawing. 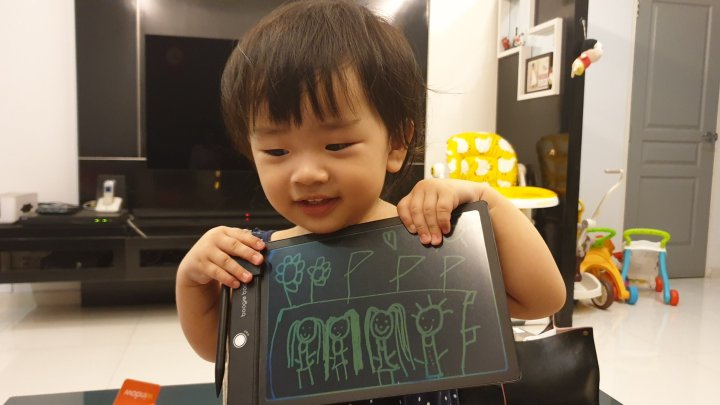 And Allie followed suit, insisting to take a photo too.

I returned to the office and realised the poster on the wall behind my favourite seat has been changed to:

Also realised, belatedly, that it was my 12th year anniversary with the company the day before.

In fact I wouldn’t have realised it if not for a strange conversation in my first meeting for the day.

It has been a season of promotions, and one of the newly promoted guys casually made a remark about being in the company for 8 years and 1 month.

I got back to my seat and realised it was casual bragging.

Well, good for you.

Four years my junior and now one band level above me.

Perhaps he was fishing for my comment on how long I’ve been in the company but I didn’t take the bait because it was irrelevant to the conversation.

I do not think I deserve a promotion more than he does. I guess I’m indeed lacking in certain areas, which I’d work on, not for a promotion but for a happier work life.

I don’t know him well enough to feel genuinely happy for him, nor to feel really upset about it.

Eight years to leadership position is a very, very short time for anyone in the company, and he’s not the only one in this season of promotions to be promoted so quickly.

Of course, time is not the most important factor.

It’s easier to be made a leader than it is to be a good leader.

Have some emotional intelligence, at the very least.

I’m not after a promotion, because it is not a priority for me right now.

In any case, my chances are low, because I do not have the top 3 prerequisites to get promoted in my function: 1) I’ve not worked in a certain category before, 2) I’m not of a certain nationality and 3) I’m not male.

Hence one week into the new fiscal year, I’ve resolved to focus on things and people that matter. I’ll still put in the extra hours, for things I’m passionate about. I’ll work hard, for outcomes I can proudly own. I resolve to ignore everything else. I’ll be happier this way. 💪💪

Always good to be home to my girls.

Very busy day at the office.

I choked up and nearly teared up in the middle of a presentation because of the cold. I get this strange, unstoppable reflux through my eyes and nose and it makes me tear up and choke.

It’s annoying when it happens when I’m in the middle of speaking and worst because it keeps me up at night.

Allie did not want to put on her school uniform in the morning so I asked our helper to let her “think about it”. 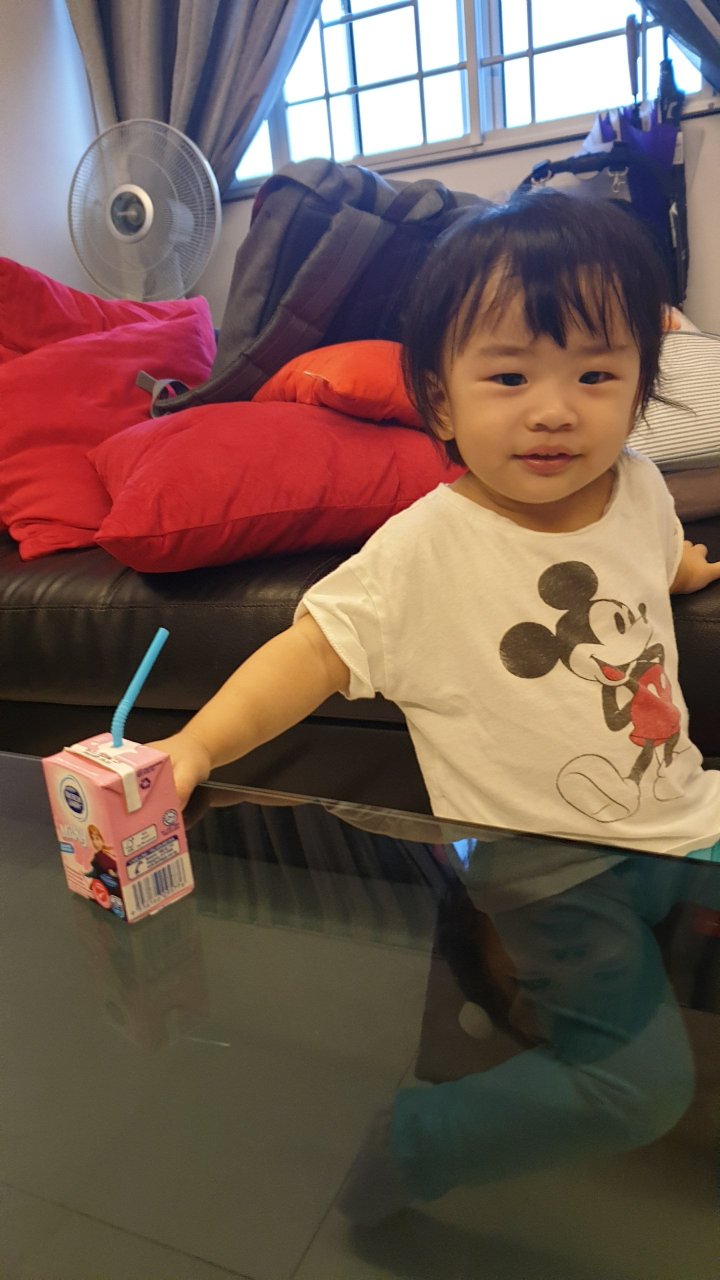 After taking her time to walk around the house and to drink her strawberry milk, Jiejie asked her, “After this you put on your uniform ok?”

She nodded so we immediately took action. 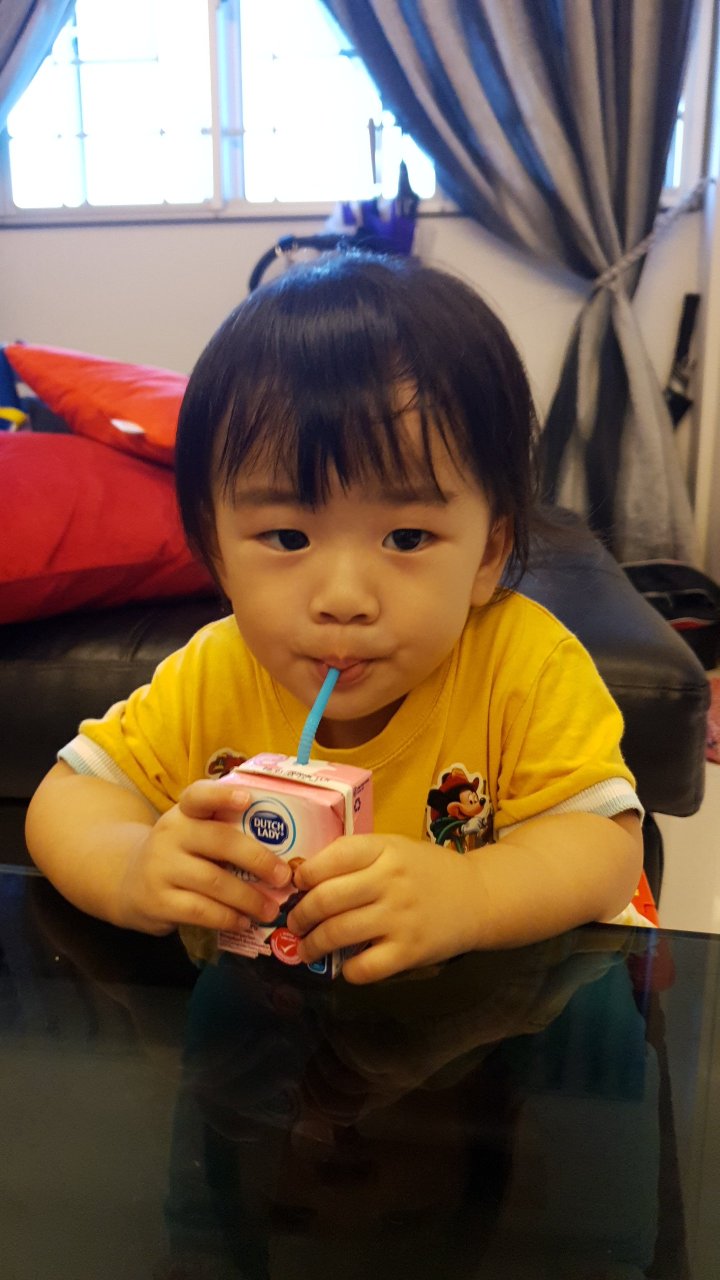 Those were actual stickers, not from Photogrid.

Jiejie and Yaya stuck the stickers onto the uniform earlier, in order to persuade her to put on the “Mouse” shirt which she requested for, but it didn’t work then. 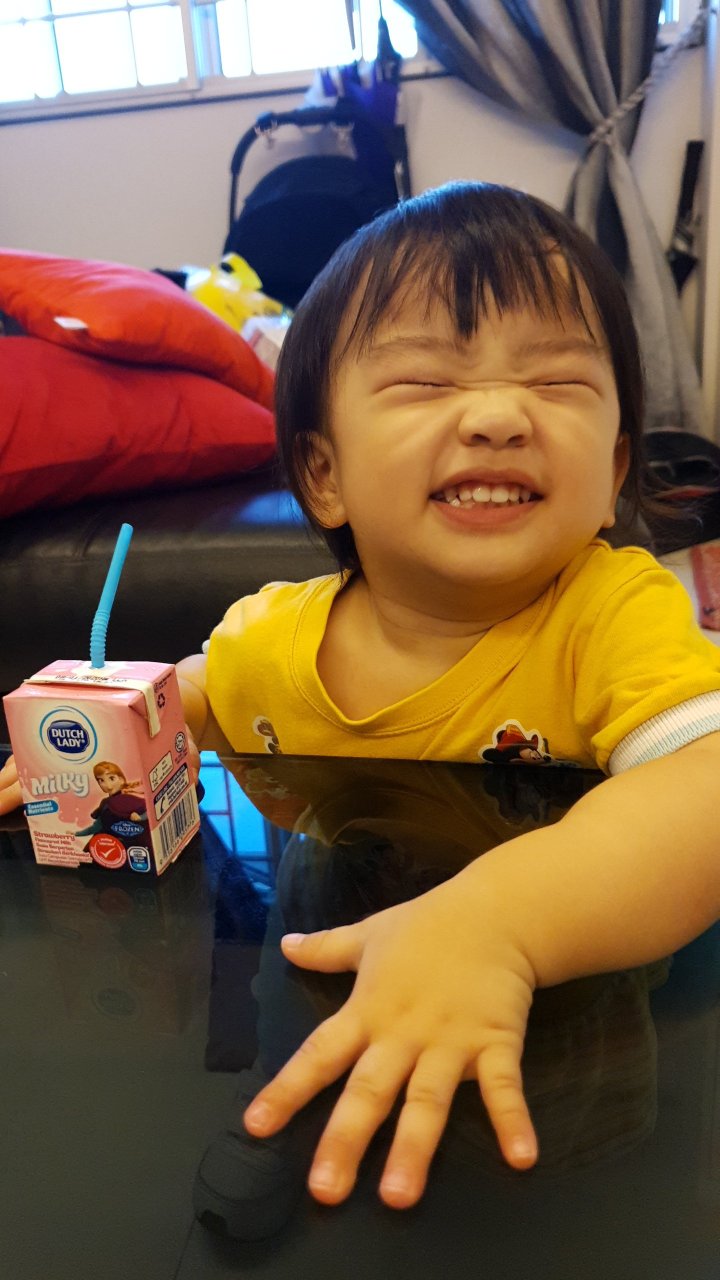 I love you and all your nonsense. 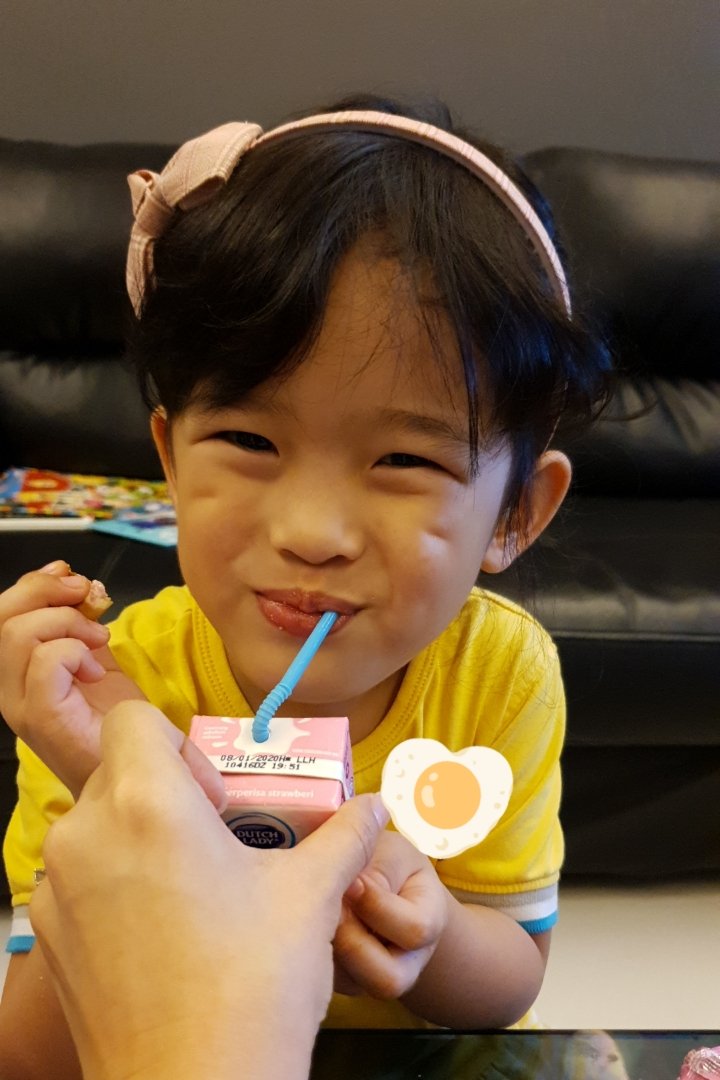 Can star in a milk commercial or not? 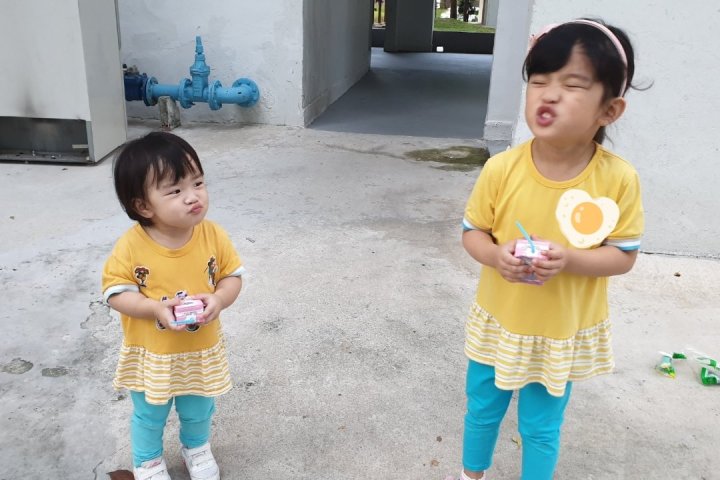 A corn cup kind of morning.

I don’t know why they’re sweating so much. 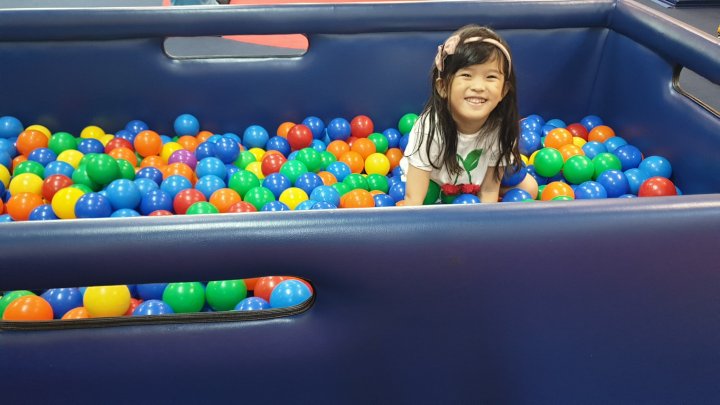 I slept poorly the night before because I kept choking on the reflux, so I kept dozing off during facial and catching my own snoring. 😅

I was too tired to explain. 😪😅

We were out bright and early to pick my mum up to go to the temple together. 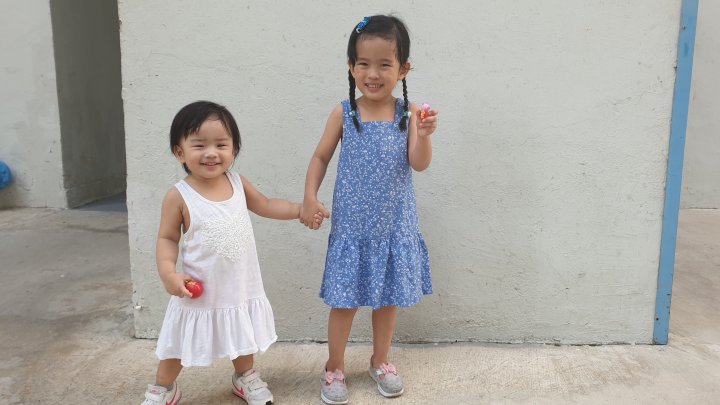 My mum and the hubs went off to buy lunch after we visited the temple.

Sent a message and we are meeting next week!

Allie contributed too by repeating the last word of Clarissa’s sentence lol.