It’s been an interesting week so far, which started with a really bad gastric attack on Saturday night.

It left me weak and wobbly for most of Sunday, just when I thought, on Friday as I tapered off some of the meds I was taking, that I was getting better.

The hubs asked me to work from home on Monday so at least I didn’t have to deal with feeling nauseous on my commute.

I managed to bring my specialist appointment forward to the next morning.

Everything happened so quickly.

We saw the specialist, he ordered for an endoscopy, and I went through the scope that very morning.

It’s a 5-10 minute procedure but I had to be sedated (which is great, because I can’t imagine going through it awake).

Still it was pretty nervewrecking and cold, lying on the bed waiting for things to happen.

The first nurse who attended to me couldn’t find a vein for my IV drip.. so she got the senior nurse to come instead.

The senior nurse put the needle through my left hand after making me exercise my hand for a few minutes and switching on all the lights to find the elusive vein.

Only.. it didn’t work. And then she tried to manuveur and twist the needle to make the blood flow.. only to say sorry to me, she has to pull it out eventually.

The fortunate thing was, the second attempt, on my right hand, worked.

I was wheeled into the endoscopy theatre where the nurse sprayed some numbing liquid into my throat twice and got me to gurgle and swallow it.

Then they made me bite on a mouth guard and I kept gagging. At the same time, the doctor put some stuff into the drip and said it might sting.

The next thing I knew, I was still lying on my side, but already in the day ward, and the hubs was beside me.

They gave me time to recover from the sedation, gave me some porridge before I changed out of the hospital gown and back into the clothes I came with.

We were asked to go back to the specialist clinic for the report.

They didn’t find bacteria but my gastric/stomch was inflamed. So the diagnosis was gastritis.

I was quite relieved.

But I felt terrible again after dinner.

Sigh this is really difficult.

I couldn’t do anything at all except to sit up in bed pressing all the acupuncture points on my arm to ease the nausea.

I continued to take sick leave today and ate like a bird.

I began to worry, when would I get better?

The hubs has been holding the fort, showering Clarissa and also taking the girls’ bedtime.

I haven’t been sleeping well and I guess that adds to the lack of appetite and reflux.

Work, gastric problem and lack of sleep just seem like a vicious cycle I can never get out of.

My FIL came over this afternoon, and we had a chat while waiting for the girls’ school bus.

He lamented about how parenting has changed from his generation to our generation.

He said he understands the stress we go through, when he was the breadwinner and had to provide for all six people at home.

But he also said that kids back then only had to attend K1 and K2 before they go to primary school, and the preschool fees were $7 a month.

Us? We start the kids so early and it’s so expensive.

He said upgrading to a condominium sounds good, but people work their arse off and work for a longer time to pay for it.

A HDB flat is just as good.

In the end he told me to take care of myself and get my health back on track.

What he said made sense, and it made me wonder if we are biting off more than we can chew.

We live rather comfortably today.

But the comfort comes with an opportunity cost of a highly demanding job.

We send our kids to school really young because we both work, and between keeping them at home with the helper and letting them go to school to play, learn and interact with other people, we choose the latter.

We want to take them on holidays so they can experience different countries and cultures.

We want to be constantly improving.

But at what cost?

I’ve realised how privileged we are, and now I only wish for good health, for everyone at home.

This time we were asked to make costume for a storybook-turned-play that the kids cooked up.

As usual I consulted Google to get inspiration for the easiest way to make an elephant costume. 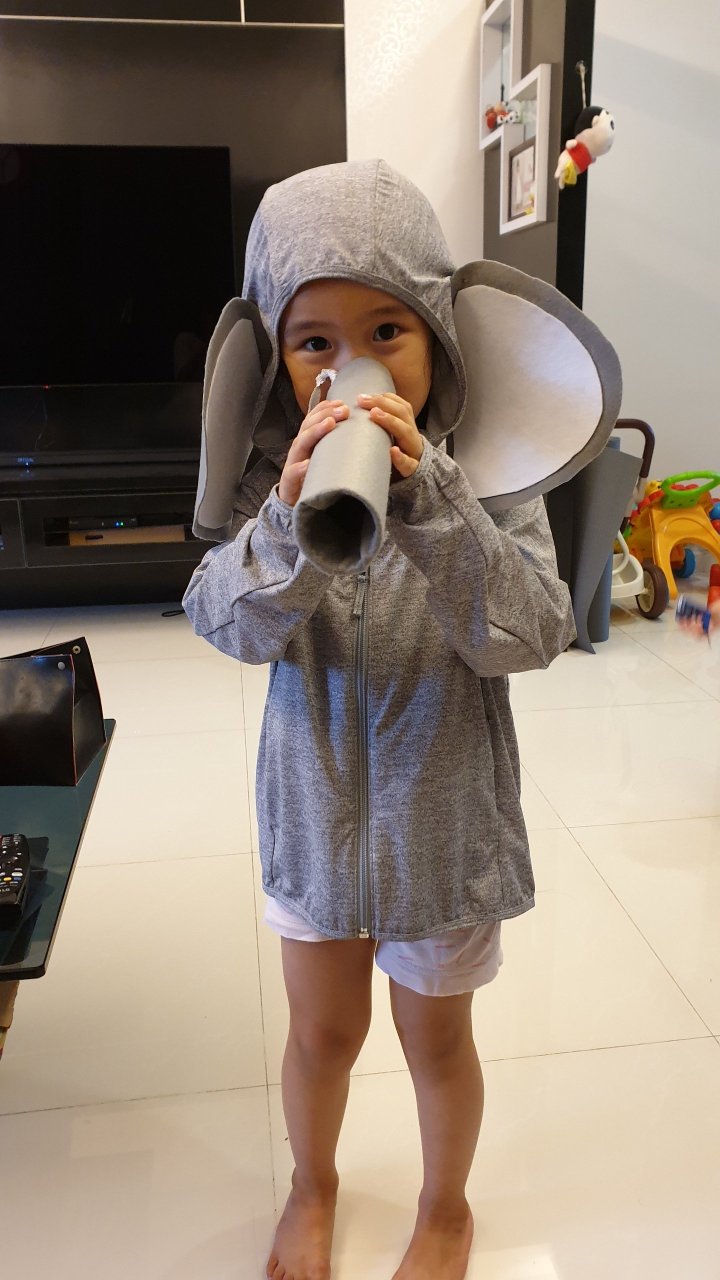 The hubs cut the ears and made the trunk while I sewed the ears onto the hoodie and tied an elastic band for the trunk.

Once she’s done with the play, we can detach the ears and she would get to wear a normal jacket. No waste!