Received a call from the girls’ school principal on Monday around 4pm, to inform me they found scratches on Allie’s face after nap time.

They’d washed and disinfected the wound, and tried to look for sharp objectives that might have caused the scratches, but couldn’t find anything.

She wanted to let me know before Allie got home.

I ended the call thanking her for informing me and telling her I’ll have a look.

I went back to my meeting, to continue my presentation, and didn’t think too much of it.

I thought she might have accidentally scratched herself while sleeping.

But I received a message from my helper with this photo:

I did not imagine the scratches to be this bad.

The next day, her English teacher called me to relate the incident to me.

It was full dress rehearsal day for most of the kids on Monday, but since Allie wasn’t taking part in the concert, she was already up from her nap by the time her classmates got back and started napping.

Another classmate who also did not go for the rehearsal was also awake.

But since most of the kids were sleeping, her teacher stepped out to wash the bottles.

The assistant teacher went into the classroom to check on the kids and found Allie lying with her cheek on the mattress, whimpering and crying.

She carried her out of the classroom and saw the scratches on her face.

I asked her teacher if she might have scratched herself before the nap, but she said that the teacher on duty did not spot any incident.

Then, she explained to me, slowly, what might have happened. She told me she couldn’t sleep the entire night thinking about the scratches on Allie’s face.

So that morning she asked the classmate who was awake at the same time as Allie, if she’d scratched her classmates the day before.

She threw out different names, all of whom she shook her head and said she did not scratch them.

Until her teacher said, “What about Allison?”

She paused and nodded.

“Did you scratch her hand?” She probed further.

She said no, face.

Still, her teacher said it was firstly and definitely her own fault for leaving the two girls unattended. And it is afterall a child’s word, even if she admitted to it. No one saw what really happened.

I told her teacher I understand how stressful her job is and I do not expect that the kids would be watched closely all the time.

To be honest, if I were her, I might have done the same – because what could two little girls who are awake in a dark classroom do that would potentially be dangerous?

But some of the cuts on her face are very deep and nasty; I would have believed them if they said a cat did it. I still find it hard to believe a 2.5-year-old did this.

(Allie is the youngest in her class and all her classmates are born before March, and are at least 7 to 8 months older than her, which is also why the classmate could relate what she did, but Allie couldn’t tell me anything. 😅)

Even if Allie had somehow provoked her, the scratches look too vicious for a classroom/post-nap tiff. (And if she’d deliberately went to snatch a toy or something, she’d also have planned to run away in case things don’t work out? 😂 But instead she got scratched several times. Since she’s always in a daze after she wakes up from her nap or for the day, my guess is that she wasn’t able to react quickly.)

In other words, I think there might be some behavioural challenges with her classmate that need to be addressed.

This might also be what prompted the teacher to ask her if she scratched any of her friends, because it would not have crossed her mind to ask, if she hadn’t demonstrated such behavior before.

Anyway I didn’t want to pass any judgement so my only requests were 1) To separate Allie from the classmate at nap time and also to let them have as little interaction as possible since we are not sure why she was aggressive towards Allie and 2) To let the girl’s parents know what might have happened so they are aware of the situation.

I really wanted to be angry, but I couldn’t be, because she is afterall only 2.5 years old?

It didn’t sit well with the hubs of course, and in his pique of anger he said he would go to school and scratch the girl back. 😂😂

Still looked bad and we decided to take her to the pd in the morning the next day.

I was also worried about scarring.

The pd prescribed a cream for the deepest cut because it was at risk of infection, but said her scratches should heal without scarring.

She said the scratches were unlikely to be caused by a sharp object and more likely due to sharp fingernails.. and since the scratches were plenty and of varying lengths and depths, the classmate definitely went at her several times.

So hard to fathom. 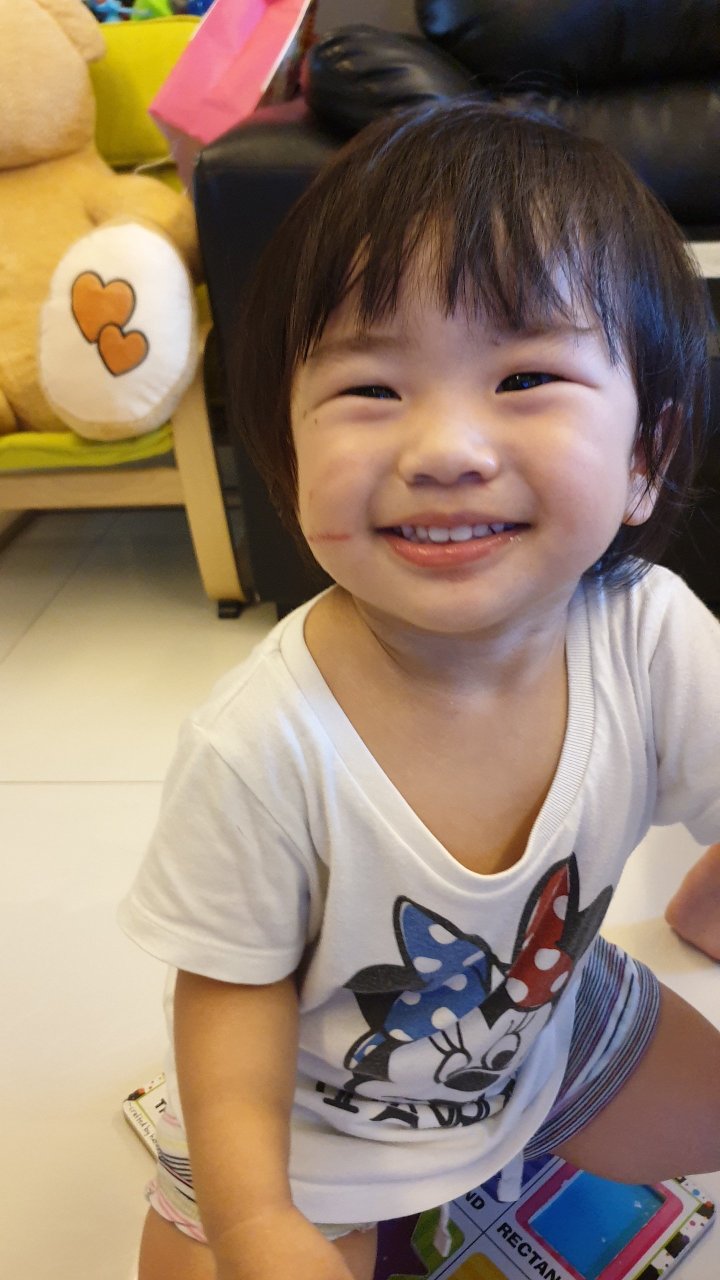 Thankfully she remained cheerful and was still happy to go to school.

It was also a very busy week at work, and I had to put in extra hours after the girls went to bed.

On Thursday she came home with a runny nose and woke up after Clarissa went to bed. I was still up working, but she was crying so much I decided to let her come out of the room.

But instead of going back to her room she wanted to go to Jiejie’s room instead. She even tried to wake Jiejie up. 😅

I decided to let her sleep in Jiejie’s room.

She eventually fell asleep at 12am and I went back to do my work until 1am.

And then I barely slept the entire night.

Because her nose was congested she snored very loudly and it was hard for me to fall asleep. Everytime I was about to doze off she’d start tossing and turning and whining.

This went on until 4am, when she started crying for milk. I took it as a cue to make her milk and also make her sleep in her own room.

But nope, she insisted on going back to Jiejie’s room.

I finally dozed off around 5am, just slightly more than an hour before my alarm would go off.

But before my alarm went off, Clarissa woke up and rolled over to the mattress to lie down on me.

I asked her gently to let me sleep for a bit more and she obliged, but as I drifted back to sleep I saw her sitting on the floor, upset.

So I got her to come back to let me hug her.. while Allie was also sleeping on my other side.

Three of us squeezing on a single bed, with two other empty beds beside us. 😅😂

It didn’t help that I had a day filled with meetings which I had to lead and a training I had to give.

By sheer will power and coffee, I was pretty functional throughout the day. But I did myself a favor by postponing the last meeting to the following week instead.. and left the office at 5pm.

We kept Allie out of school on Friday and took Clarissa to school.

“Wah Mummy, I have so many things to do today,” Clarissa said as we walked to our car.

I was amused, because I thought I was the only one with a calendar packed with meetings that day.

I thought she meant she’d be busy practising for her concert performance (which is today) so I asked her, “Oh, what would you be busy with?”

“I will be busy answering many people’s many questions about why Allie is not in school today,” she answered in a slightly exasperated but loving big-sister tone.

2 thoughts on “Busy week of drama”