It’s 18:25 and I’m on my way home in a Grab, with 80 unread emails in my outlook, and counting. Emails are still coming in on the outlook app in my phone.

It has been a hectic work day and despite feeling very uncomfortable about even having 8 unread emails (and what’s more, 80?!) I decided I should prioritise the urgent and important stuff today.

I also decided not to touch my laptop at all over the weekend because I simply could not (which is part of the reason why I’m still at >80 unread emails today).

I boldly requested my boss’ secretary to postpone my review meeting because I simply could not churn out a preread in time. She very, very kindly changed my slot to a later date, which bought me 2 more days.

We didn’t do much over the weekend – Allie still has a runny nose so we skipped both her gym and swimming class. She was so upset about missing her swimming class when she saw Clarissa getting changed.

Marched to the cupboard where we keep her swimming costume and insisted on opening it. When I refused to open the door and tried to explain to her why she couldn’t go for her swimming lesson, she sat in the corner and sulked.

Tried to talk to her again but she folded her arms and said, “Uhmp!” before turning her head away. 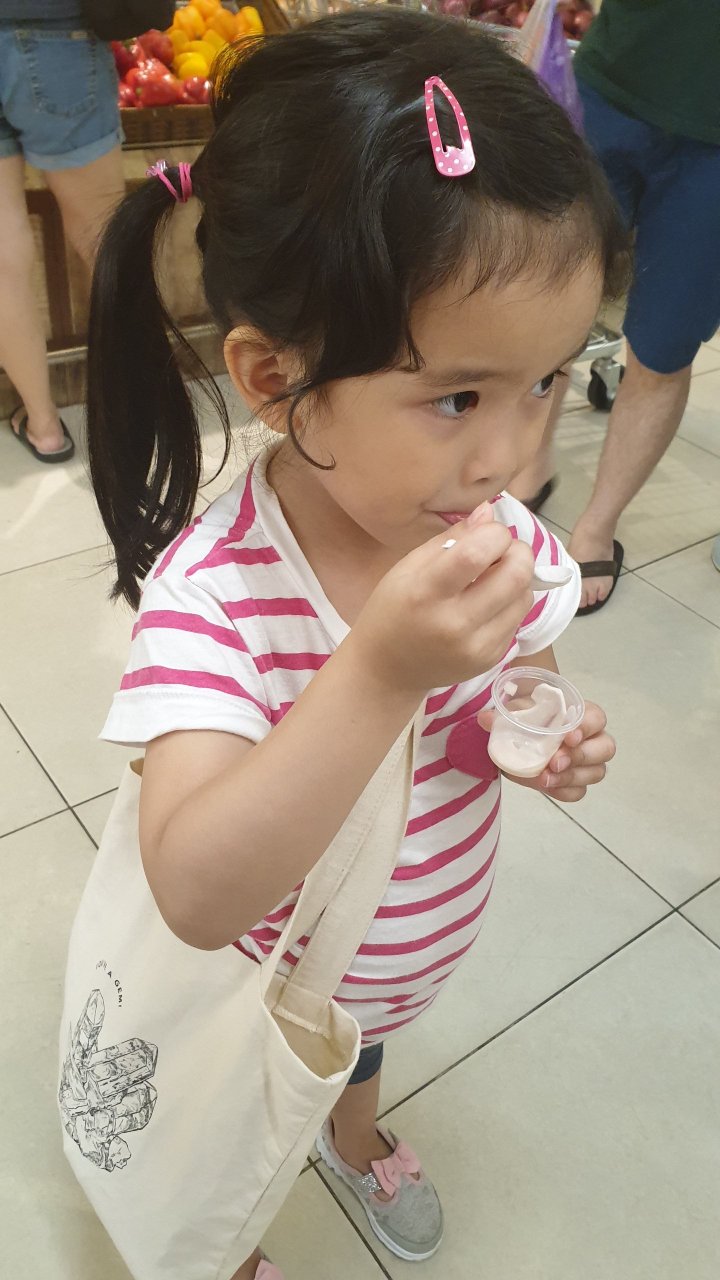 We took Clarissa out for lunch on Saturday because I wanted to get some mattress covers for Allie.

She requested to go to a supermarket.

We asked her what she wanted to buy and she said, “No lah, just walk around lah!”

So we obliged and it turned out that there was a yoghurt promotion in the store.

She immediately walked up and took the promoter’s offer to give her a small cup to sample.

We ended up with 6 cups of yoghurt, 1 blue balloon and I sculpted ballon (not in picture lol).

I jokingly asked her how she knew about the promotion and she said she didn’t know about it. 😄 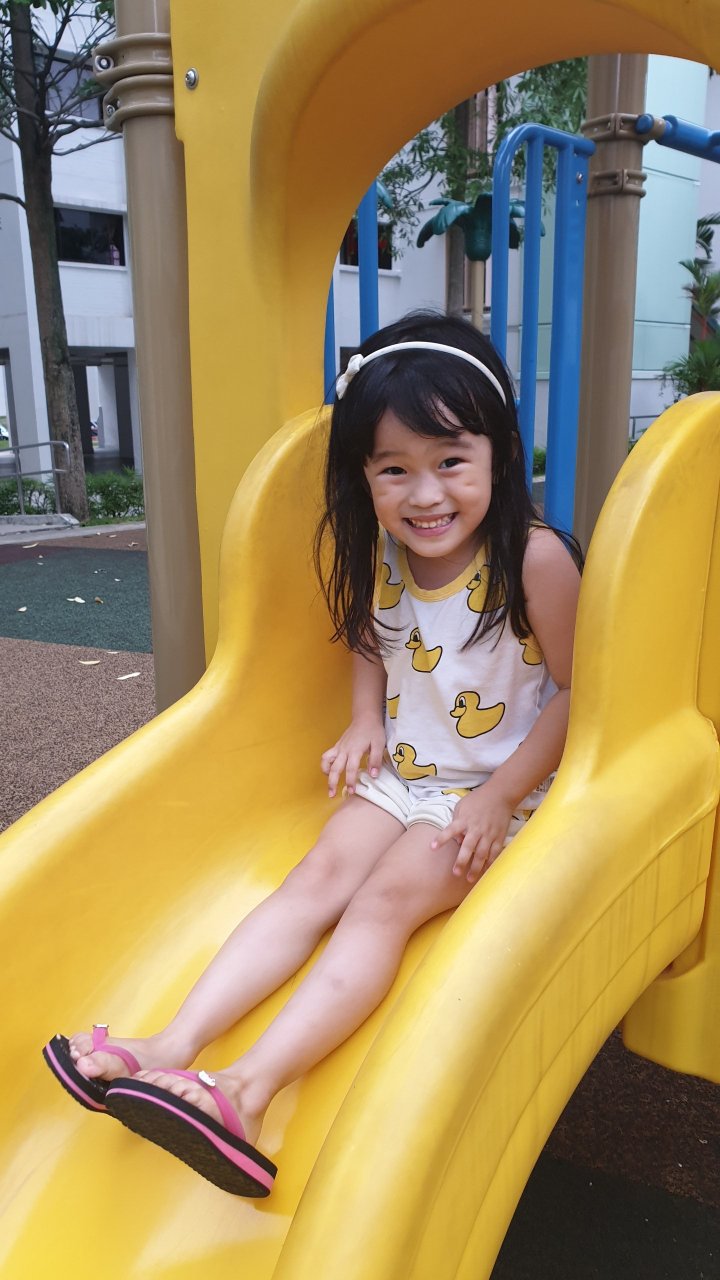 Very quick playground run before dinner because these two were getting so restless at home.

My view on Sunday morning.

Jiejie putting on a hairclip for Meimei and Meimei pretending to pee in the potty. 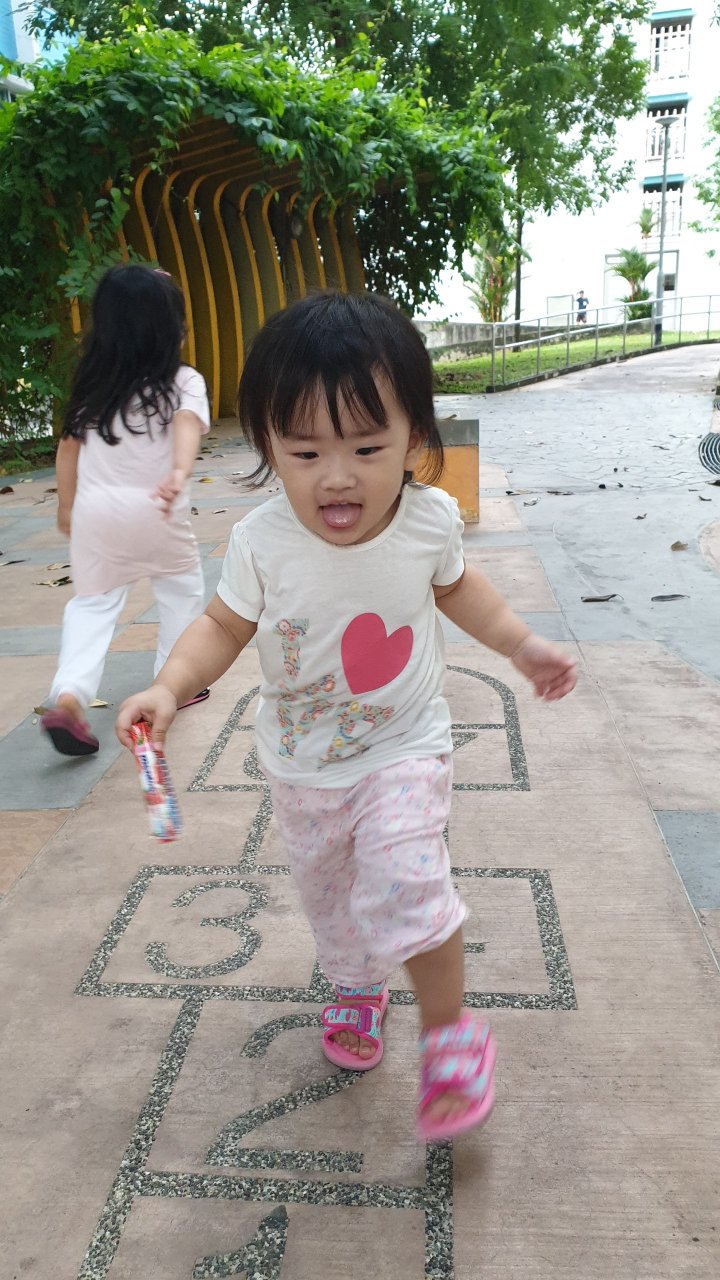 Daddy was snoozing in bed after running in Sundown and watching soccer until 4am the night before.

So I took the girls in pyjamas down for a breakfast and hopscotch run.

Feeding Allie became the highlight of the day – lunch was a breeze but dinner was a bit of the struggle.

She didn’t fight sleep come bedtime, but the lightning and thunder kept making her jump.

She cried and asked to be carried.

So I did, and she’d drift off to sleep but the next thunder would come and she’d hug me back very tightly.

I learned to preempt the thunder by covering her ears whenever I see the lightning. It helped a little, but she’d still whine and grab hold of my shirt tightly.

My arms and legs were aching by the 10th strike of the thunder. 😂

Eventually I managed to slowly put her onto the mattress but with my body close to her so she would still feel some form of protection. I was propping myself up in a push-up position and each time the thunder came she’d grab my shirt and pull me even closer to her.

If this was not a test of arm strength and how much I can contort my body, I don’t know what it is.

I’m very amused that someone so naughty can be so scared of the thunder.. and yet I marvel at how much of a baby she still is, seeking comfort and assurance that she is safe in my arms.

She seems to have grown a little taller now, occupying almost the entire length of the small mattress.

I love her so much, funny antics, sticky ways, thunder-fearing nature and all.

Came out of her room when she was settled and in deep sleep, and realised I was in the room for more than an hour.

Had a chat with Jiejie before we turned in for the night.

I was so exhausted I dozed off just slightly past 10pm and woke up at 3am. Took a while to fall back asleep despite being so tired and ended up having disjointed dreams. I basically woke up feeling like I didn’t sleep.

Took a long time to get out of the house this morning only to realise:

2) The hubs realised it was filming day today and the kids are asked to wear their formal school uniform.

Clarissa always wears the PE attire to school and we only have one set of the formal attire — a dress, which is too short for her.

So in any case even if we knew about it (I didn’t get the memo) before getting out of the house, we wouldn’t be able to dress her in the formal attire because it would look like a top on her and not a dress. 😂

The hubs grumbled about how she was the odd one out when we reached her school and everyone was in formal attire.

Clarissa was nonchalant about it because she thinks her PE attire is the uniform, and her English teacher assured us that it is ok.

But the hubs wouldn’t buy it and concluded (to me) that we are lousy parents and simply don’t care.

I tried to tell him, yeah we forgot, that’s all.

But he said we forgot because we didn’t care enough.

I don’t think this makes us lousy parents, though I guess we are quite lazy, get tired easily and have limited capacity and/or have enough energy for only one or two things at a time.

Honestly my mind always feels like it’s bursting with things to remember and things to do, even on days where I feel like I have done nothing much but to take care of the girls.

It’s like how I work 18 hours every day when I’m on business trips and yet feel like I’ve not accomplished anything.

I could use some help. Or give myself a break; I can’t do everything and I need to stop feeling bad about not being superwoman.