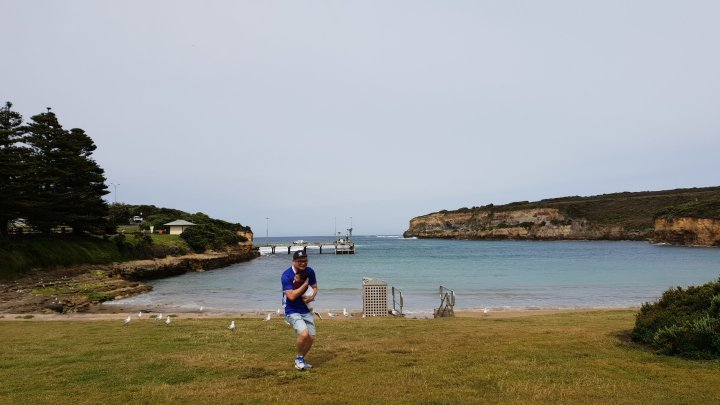 Pre-breakfast activity: Running away from seagulls. 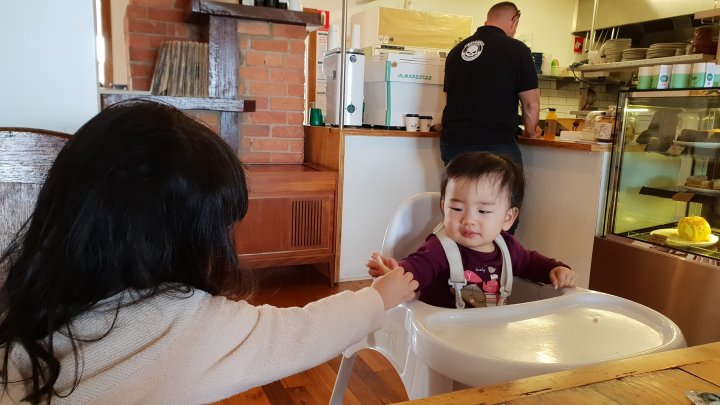 Jiejie was in charge of handing out biscuits to Meimei.

She was busy staring at the patrons and one of them said to us, amused, “She can take part in a staring competition! She doesn’t blink at all!” 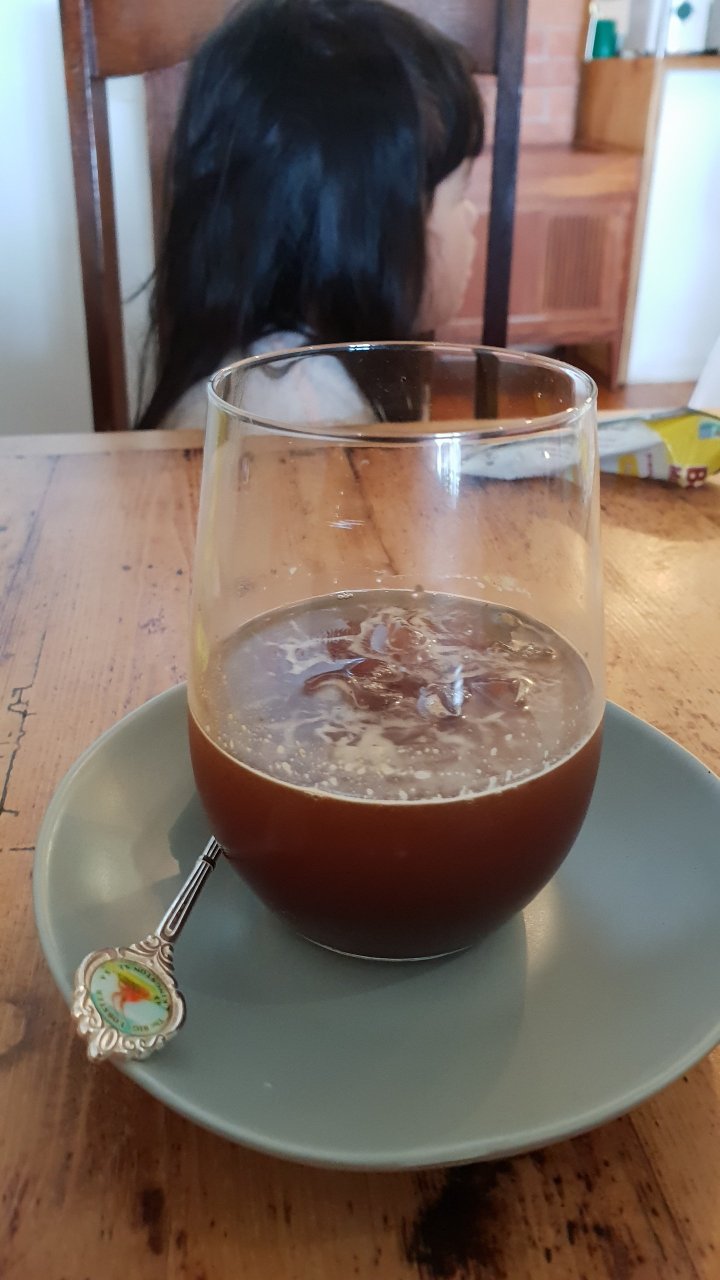 Decent breakfast at Forage on the Foreshore. 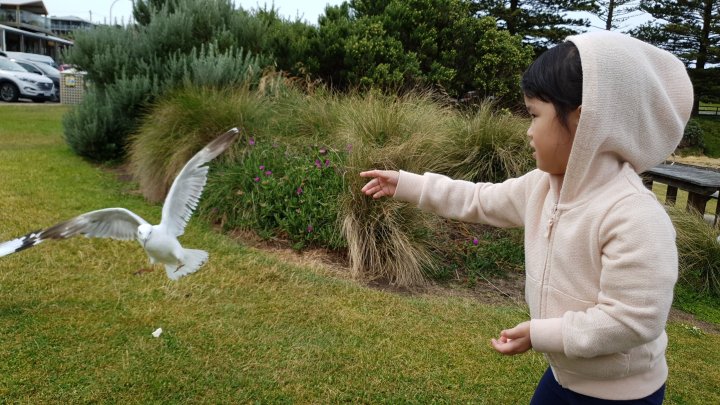 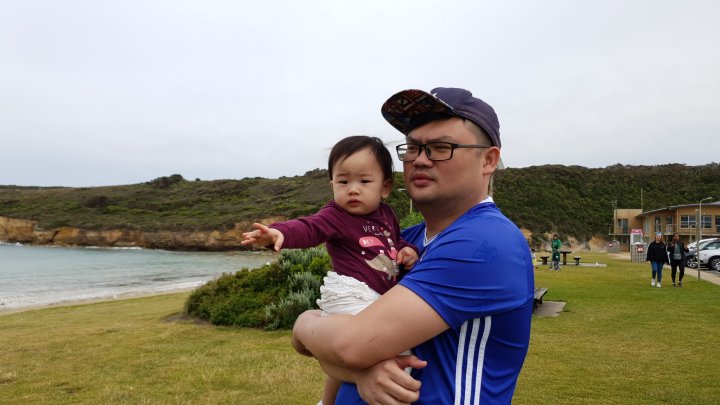 The kids had a lot of fun!

Clarissa has been asking when she can feed animals again lol.

I think I can sit here all day just staring out at the sand and sea and seagulls.

We set off for The Arch.

We thought we were being smart(er) by feeding Allie and strapping her into the carrier with me before driving off.

But it turned out to be the wrong move because not only did she not nap as planned, she was crying, struggling to get out of the carrier and trying to grab things.

She was probably over-tired and couldn’t settle.

I felt extremely stressed because her crying in the car always frustrates her Daddy and she was really going crazy trying to grab everything around her.

Nothing could calm her down and in my frustration I smacked her bum, much to the shock of the hubs.

We pulled over by the woods and I made her sleep in the carrier before continuing the journey.

I was trying hard not to cry myself when the hubs squeezed my hand. 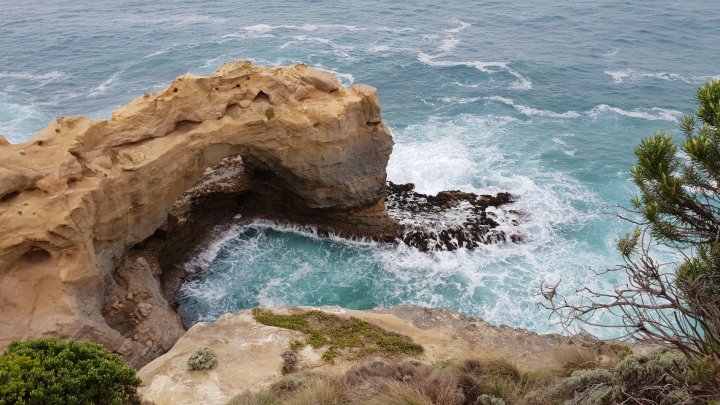 We got the The Arch and it was breathtaking.

I was carrying Allie and holding Clarissa’s hand while walking to the lookout point.

“Look, Clarissa! This is so beautiful!” I said to her.

I took out my phone, and reached out slightly to snap a photo.

Clarissa took a peek, not quite interested, nd said to me, “Hmm but Mummy, if you drop the phone into the sea, it won’t be so beautiful already.”

I guess she meant I would be upset and won’t appreciate the scenery as much anymore? 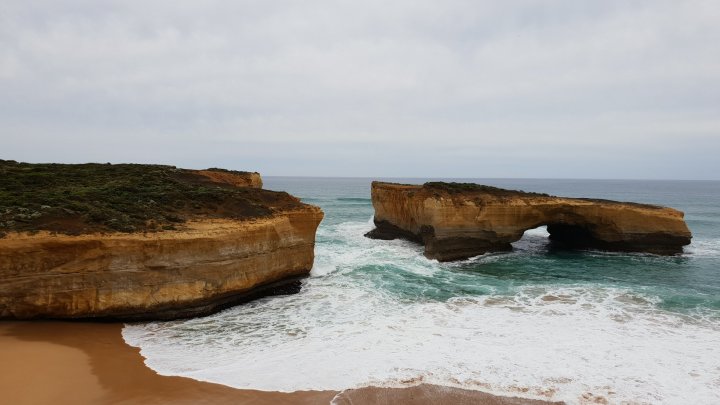 It was nice just looking out and listening to the waves hitting against the rocks. 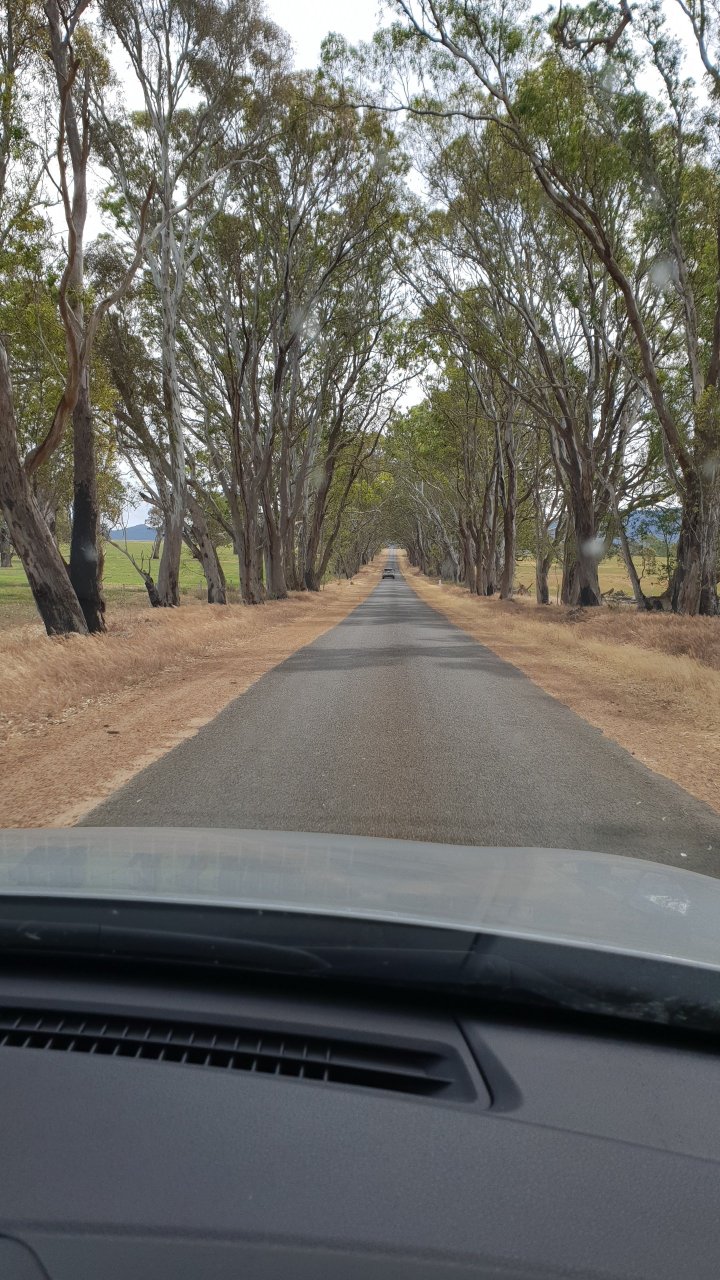 And then it was yet another trying journey trying to get to The Views Restaurant to have lunch.

We had to stop twice – once to feed and once to change her – but nothing quite worked as she cried and wailed throughout the ride.

The best part of this was that after the long and arduous journey and getting out of the car we were told that the restaurant wasn’t open for lunch and dinner would only start at 6pm.

We drove to our air bnb instead. 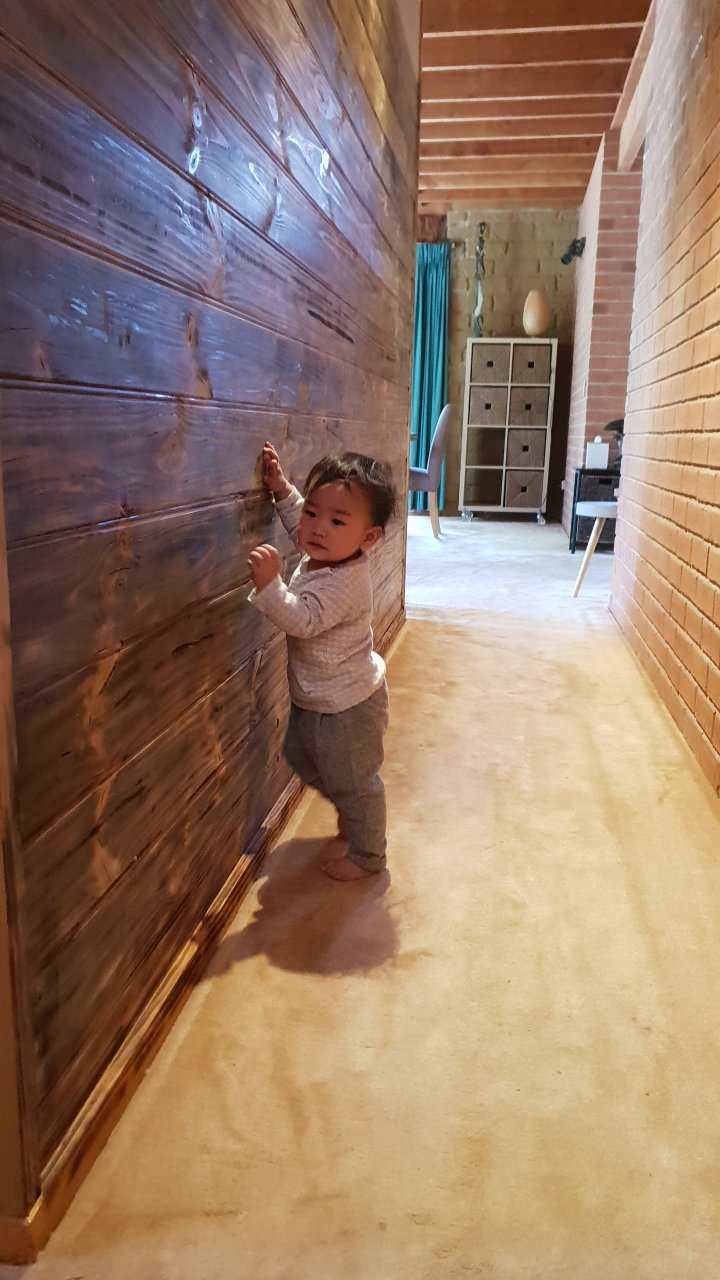 Our accommodation for the next two nights!

Someone was having a field day with stairs and walking along the walls.

Does she look like someone who’d cried for two hours in the car?

I managed to feed her dinner before we set off for a walk at Pinnacle. It turned out to be quite a difficult and long hike for young kids (and people carrying young kids lol) so we decided to turn back, after 10 minutes of walking.

Drove back to The Views again for dinner, through lots of crying again, got there, unloaded everyone and everything, got into the restaurant.. and the same receptionist told us the place was closed for a private function wtf.

Wouldn’t it be a very logical thing to say?

She said they weren’t open for lunch. Dinner was from 6pm.

We said, ok we will come back later then.

At that point it would have been logical and kind to inform us, oh and we are not open for dinner tonight.

Honestly I don’t buy her “private function” bullshit. I think she just didn’t want to serve us because she asked us “table for how many?” when we entered the restaurant and her face and tone changed after we told them there were 8 of us and that we came earlier in the afternoon.

Everything else was closed and we ended going for Fish and Chips, which was the only restaurant in the small town that seemed to be open. 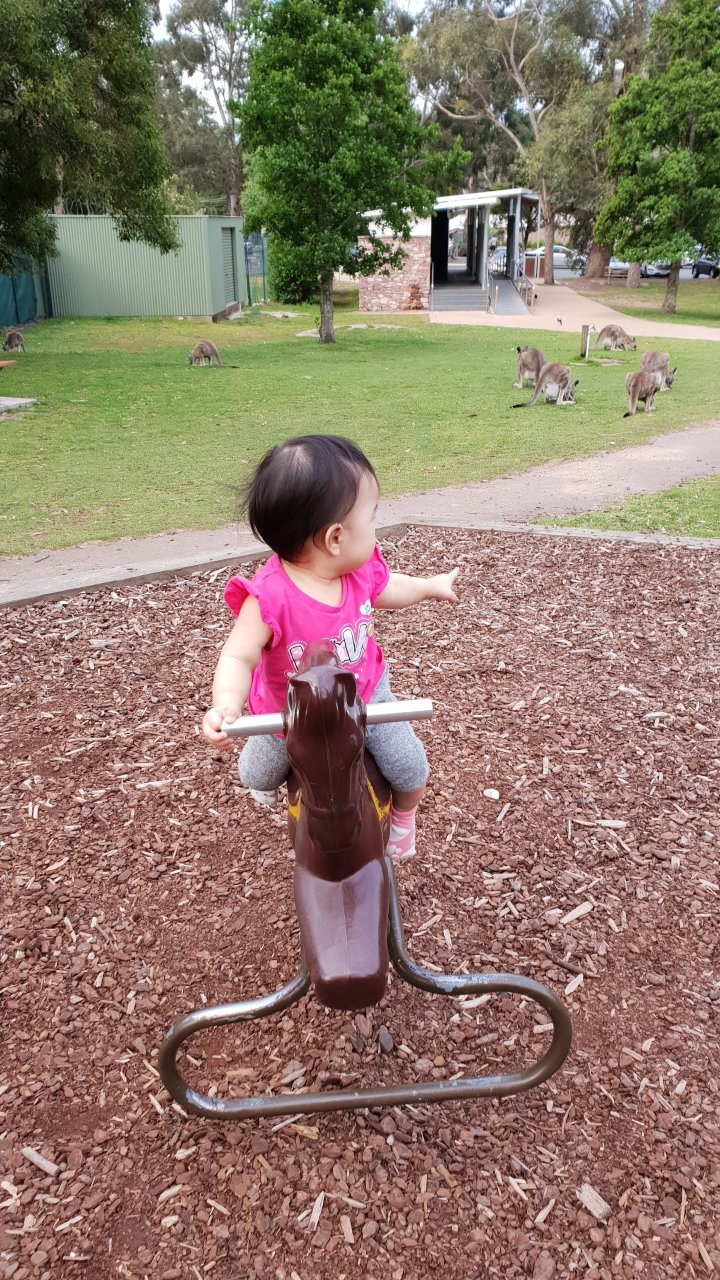 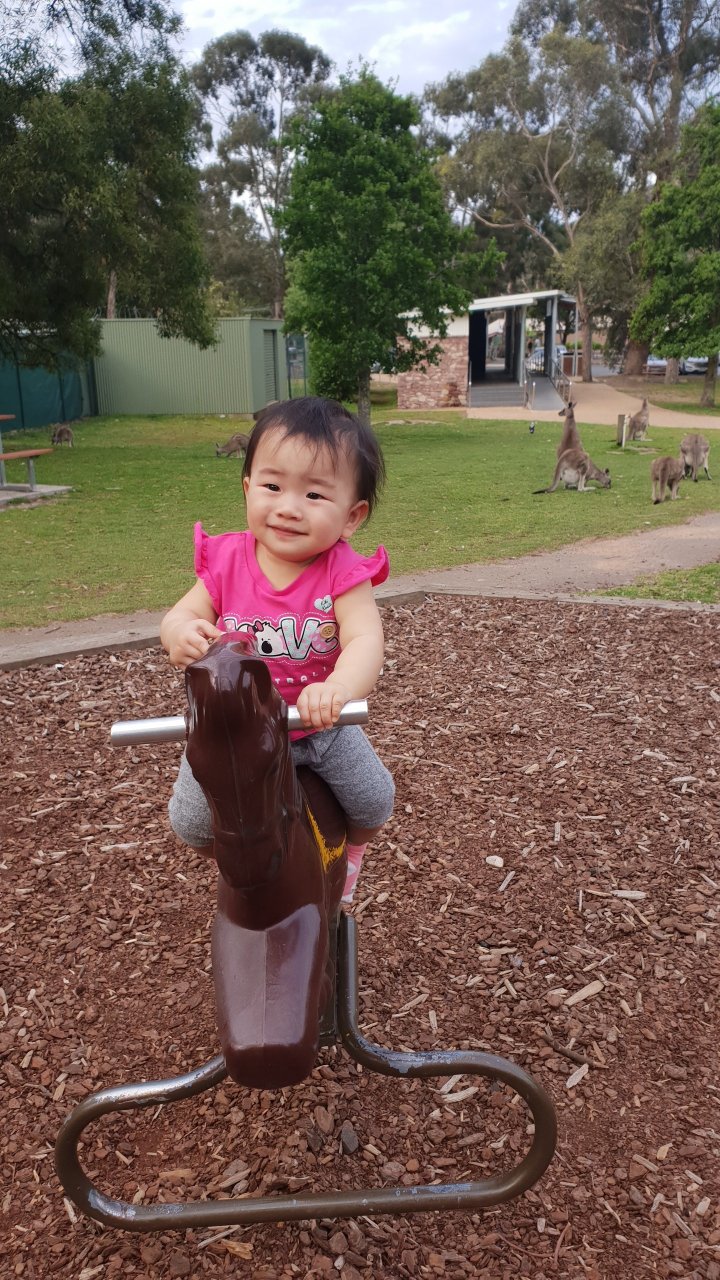 Playground with the wallabies while waiting for our take-out.

Does she look someone who’d cried in rhe car the entire day?

Finished dinner in a blur, showered the girls and it was bedtime after a long and way tooo eventful day.

This might have been the lowest point of this trip but I’m thankful for the little moments where Clarrisa, the hubs and I sang, told made-up stories and gave everything we could, just to make the baby smile.