And then there are four.

Ready to face the world.

Now just waiting for the 4th member to learn how to walk so she can join the girls’ march. 🤣 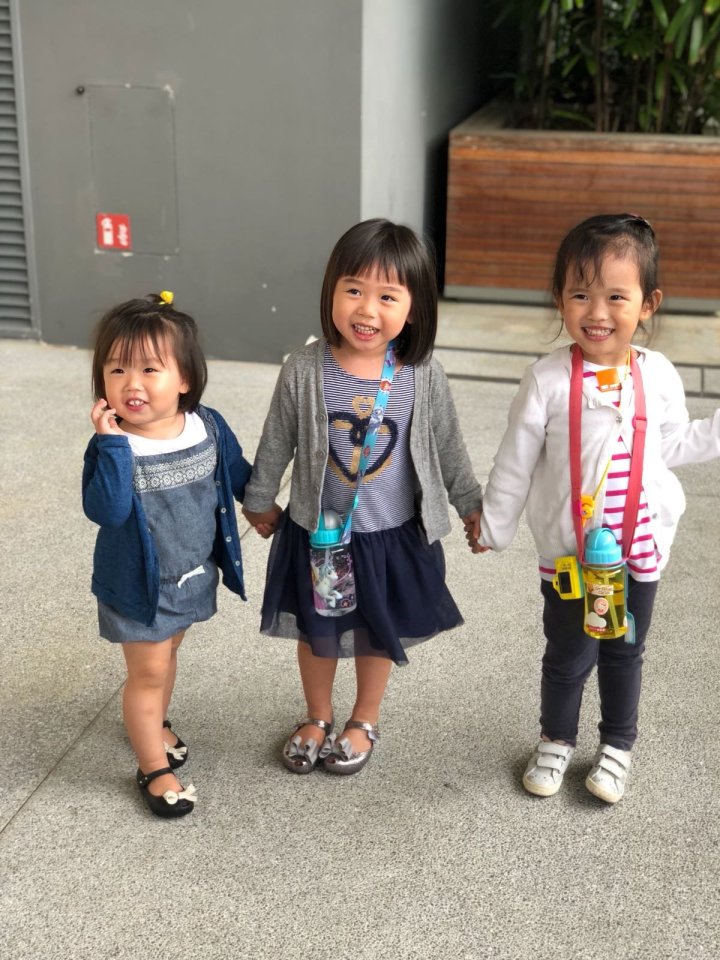 Member #4 asleep in the kangaroo on Daddy’s chest post lunch. 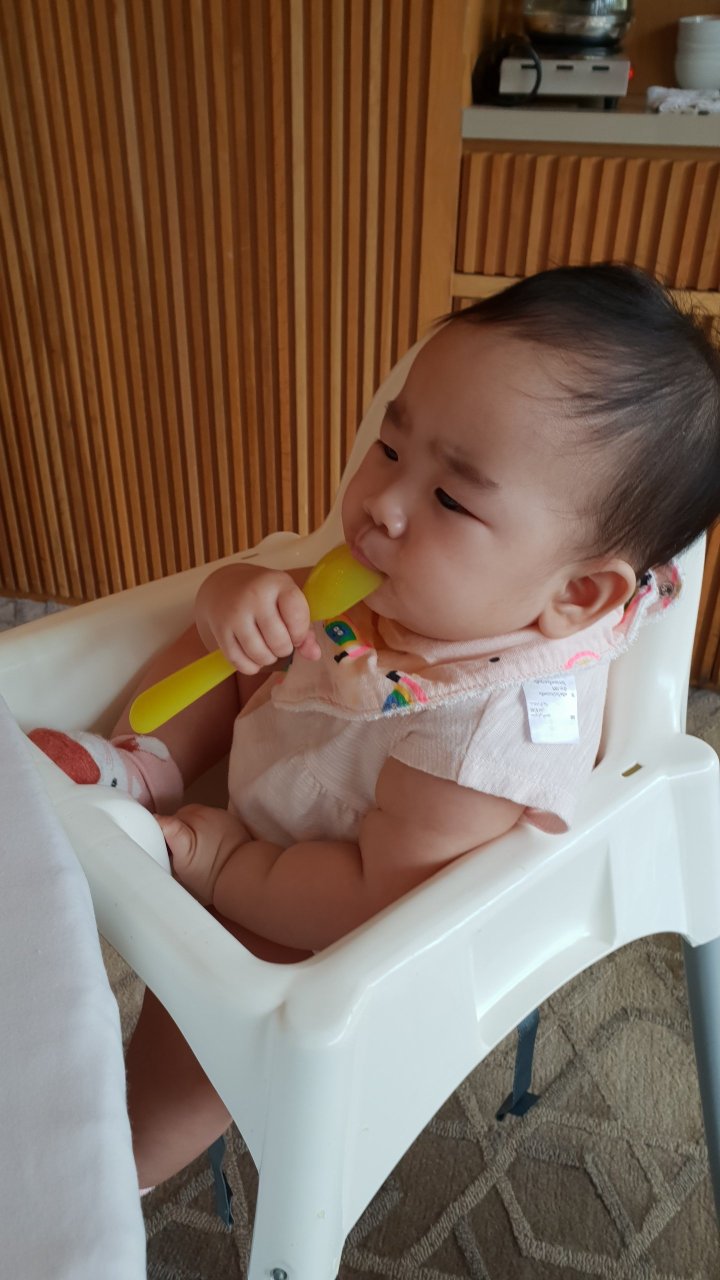 It was tiring being the boss. 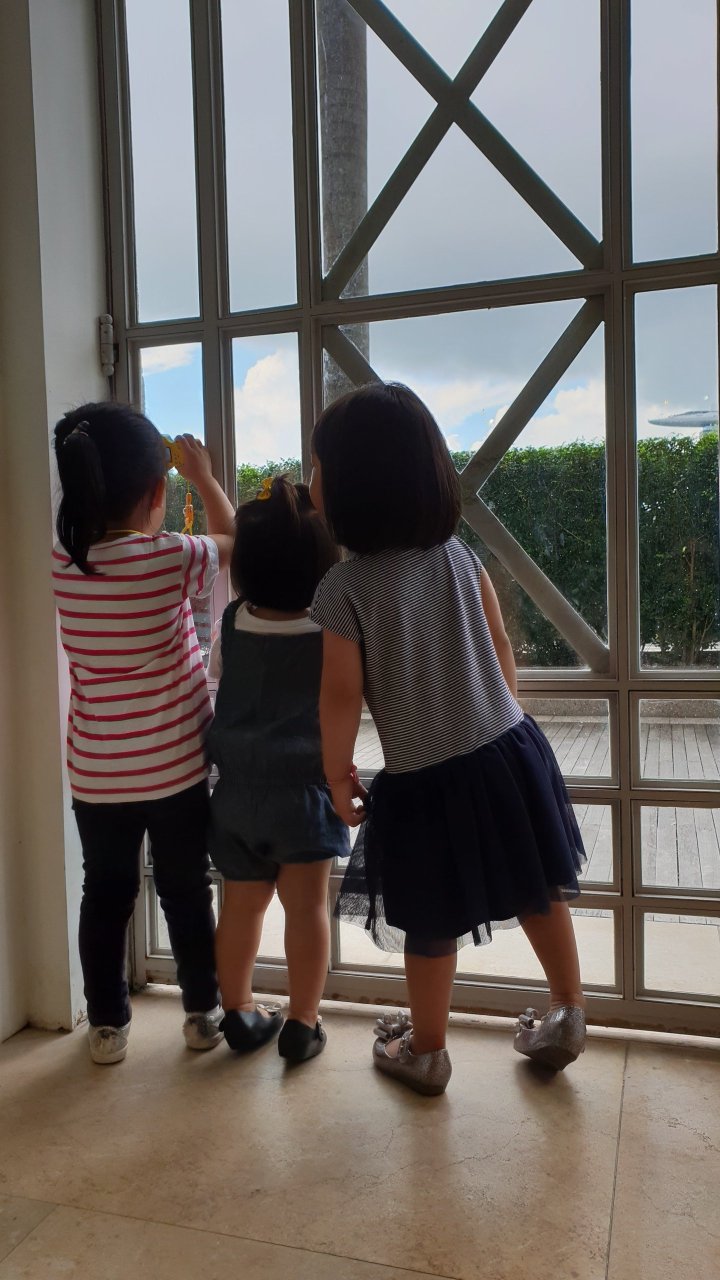 Even Jiejie can’t wait for Meimei to start walking.

At bedtime she told me she was happy to go out with R Meimei and R Meimei, and asked if we could go to the same place again.

“When Meimei can walk, all of us can run and run together and then rest together! Daddy and Mummy and Auntie S and Uncle K can sit on the stone to watch!” She said enthusiastically.

Dinner with the family on Friday.

Highlight of this photo was the Peppa pig she’d managed to stick onto the wall. 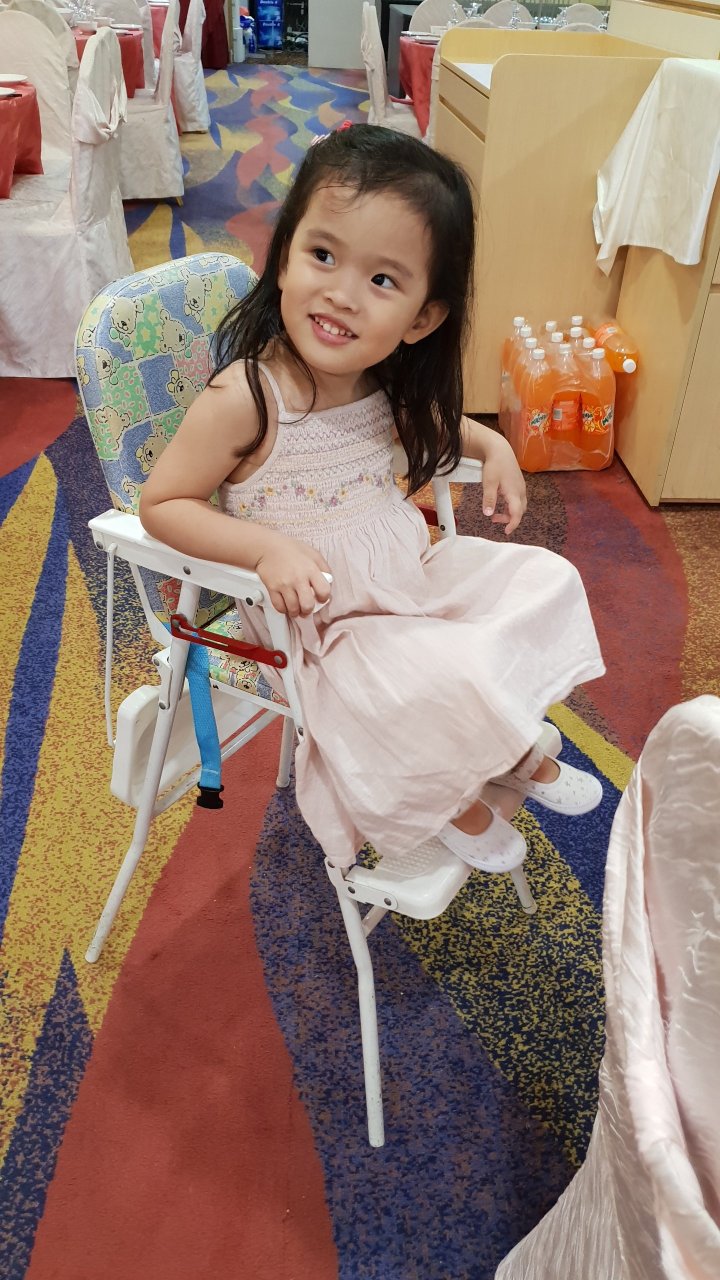 Love her in this dress from Next!

Been wanting to put her in it but she always refuses to, opting for t-shirt and pants instead.

She was a little more demure as usual, probably the effect of wearing a girly number. 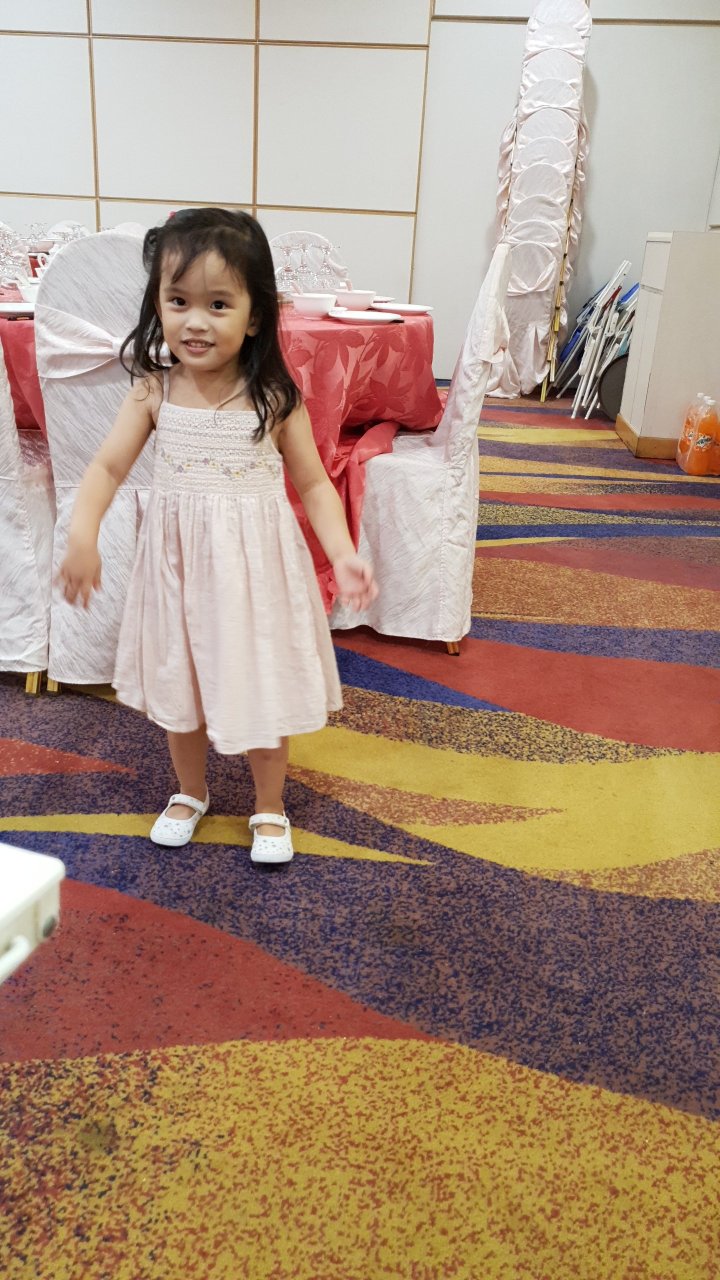 But of course she was her usual self at the end of the dinner.

Video from my mum.

Clarissa was going around taking passport photos for each member of our family, and going around the table showing off the photo to each and every one.

This one didn’t get to go because she was naughty.

We reckoned it’d be way past her bedtime and she’d be cranky in an open environment.

Not only can she pull herself up to stand in the cot, she’s now able to walk sideways to the changing station..

Two of the four new teeth have cut through!

There is a gap between them though lol.

She’s been doing this mischievous grin lately, squeezing her nose and eyes together to make this face.

Having fun with Wai-gong.

These two were casually watching tv together.

Jiejie was patiently showing Meimei the correct way to eat the apple.

Music to my ears.

They were giggling for quite a while before I picked up the phone to take a video. 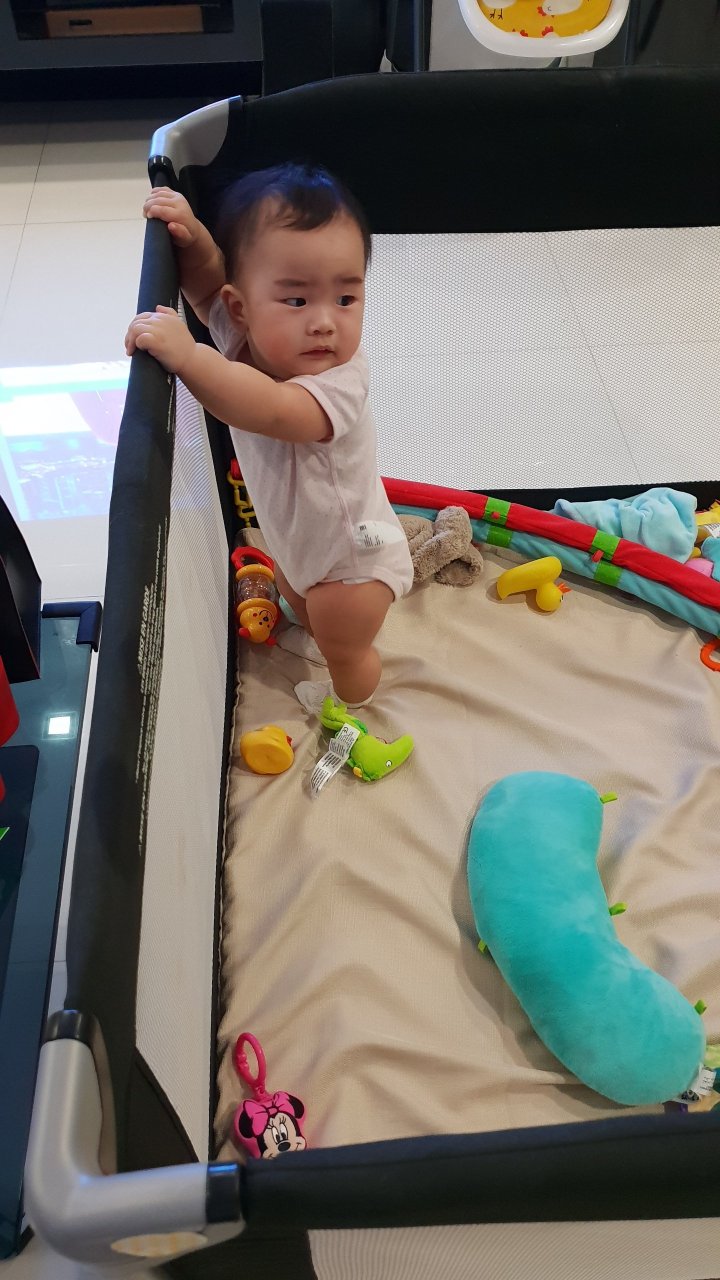 Pulled herself up to stand and walked from one end of the playpen to the other.

The situation at 6am this morning.

Still waiting for the day she can sleep through the night.

After this photo was taken, she used one hand to hold onto the cot and the other to reach out to the bunny.. and ate the bunny’s ear. 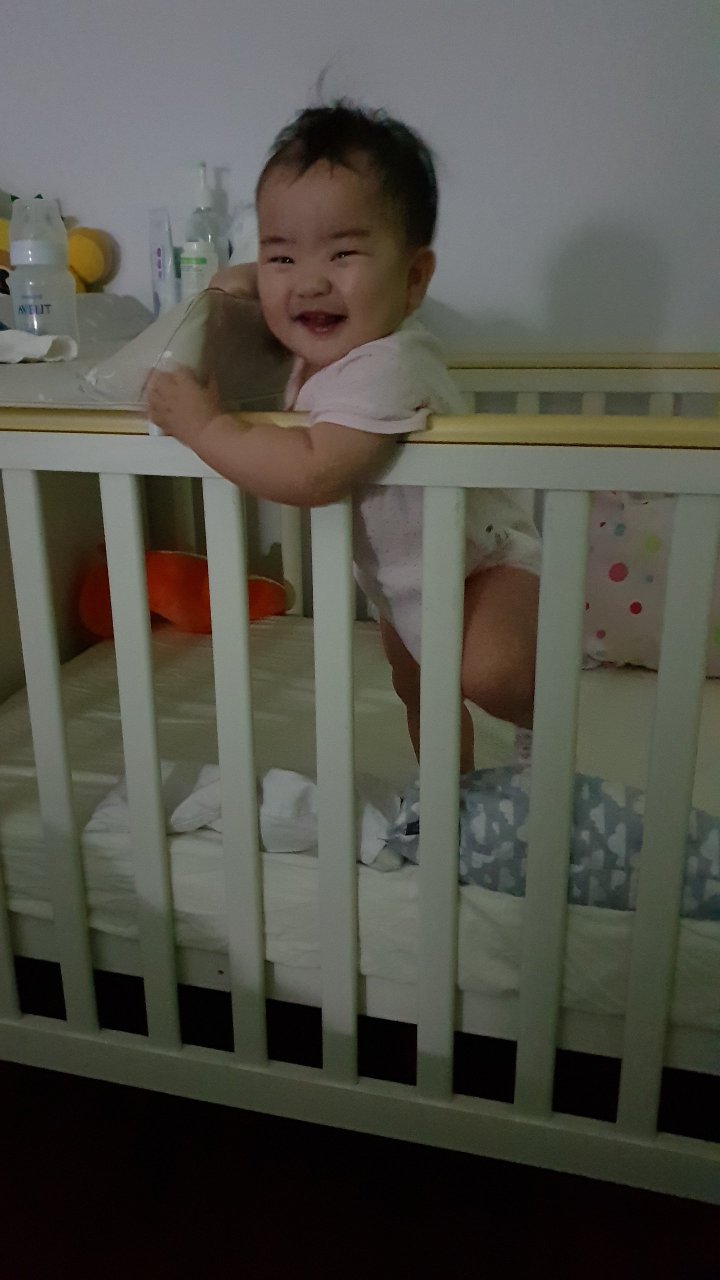 And then she moved to the other side to attack the changing station.

Luckily you are cute. 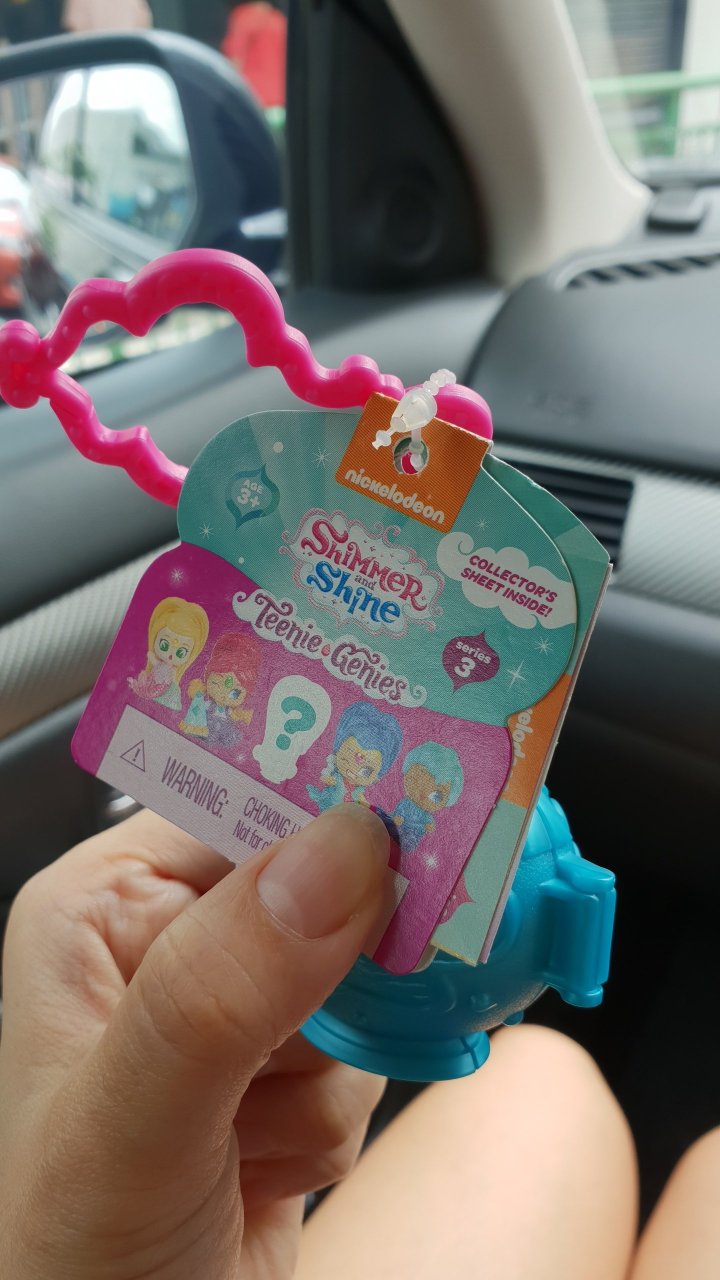 Later in the morning, we went to the nearby mall for a quick lunch and Clarissa asked if she could get a “shimmer and shine bottle” after lunch.

I didn’t know what she was talking about but I said ok, and brought her to Toy’R’Us after lunch.

I thought we would end up buying a random surprise egg but she actually led me to one of the shelves inside the shop and lo and behold, there was a tray of “shimmer and shine” genie bottles like this!?

The last time we went to Toy’R’Us was probably three weeks ago, maybe even longer than that!?

She might have learned about this shimmer and shine thing from some YouTube toy reveal/review videos, but how did she know where in Toy’R’Us to get them?!

Bumped into my friend while we were rushing to the toilet, because this girl kept saying, “Mummy, urgent. Very urgent!”

And she was twisting her entire body while waiting for me to wipe the toilet seat.

When she was done I told her to say hello to my friend “Auntie XX” properly if she was still outside.

She asked me why Auntie XX doesn’t have an English name, like “Clarissa”.