We were up and out by 730am this morning because of Clarissa’s swollen hand.

Sigh she’d just recovered from the bites on her face, which also made the left side of the face swell up for a few days before it subsided.

I noticed the bite on Sunday evening and applied some cream for her.

It got more swollen on Monday morning but it didn’t look very serious.

Last evening it was swollen to a point she was quiet the entire night and teared when we asked her what was wrong.

We promised her it’d get better by today but this morning it went BOOM, more swollen than ever.

The swell spread past her wrist and she couldn’t even bend her fingers. Needless to say she started crying once she woke up. 😭

Sigh poor thing. Why is she so sensitive to bites?

We went to the 24-hour family clinic at TMC and the doctor gave her two types of cream, ibuprofen for pain and antibiotics in case the swelling doesn’t go down by tonight.

The antibiotics was given because we asked. He didn’t even think of giving it.

Good thing we asked because despite applying the creams and ice pack, the swelling got worse. Her hand was hard and the swell had spread to half the length of her forearm.

I caved and gave her the antibiotics.

Because Clarissa missed her Auntie O and asked me to help her send a voice message. 😆

Playing with her Auntie-BFFs helped her feel less anxious about her hand, even though she refused to take photos.

So only little marshmallow starred in the photos. She’s found a bff in Auntie L and would voluntarily and repeatedly crawl over to her to sit on her lap!

I love that my girls are BFFs with my friends. 😊

We went down together to buy lunch from Clarissa’s favourite charsiew rice stall and the uncle gave us the best cuts of each kind of meat . 😆

Clearing my backlog of photos in my phone.

Friday evening, after I got home from China.

Allie was watching me eat my dinner and trying to get my attention.

She can now do a mean downward dog lol but I wasn’t able to take a picture in time.

She has also succeeded, just once, to push herself up to sit!

Chilling with my girls (and feeling very popular).

“Read” the letter Clarissa sent to me while I was away. 😍

She only started playing with water after her lesson, when she sat on the ledge watching Jiejie go into the pool. 😅

Didn’t nap after she got changed and had some milk.

Wondering, instead, how do I get the strap into my mouth? 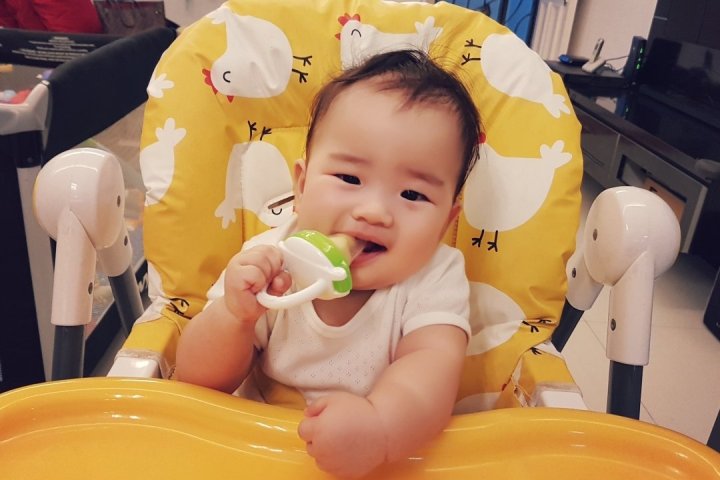 I bought this awesome thing from pupsik for our little marshmallow. Put any kind of fruit in it and let her munch. There are tiny holes to let the fruit seep through into her mouth.

This girl pulled herself up to STAND in the cot.

She had her hands on the rails and she stood half bent and leaning forward.

It happened so fast my heart skipped a beat and I threw my phone out. 😂

Time to lower the cot! 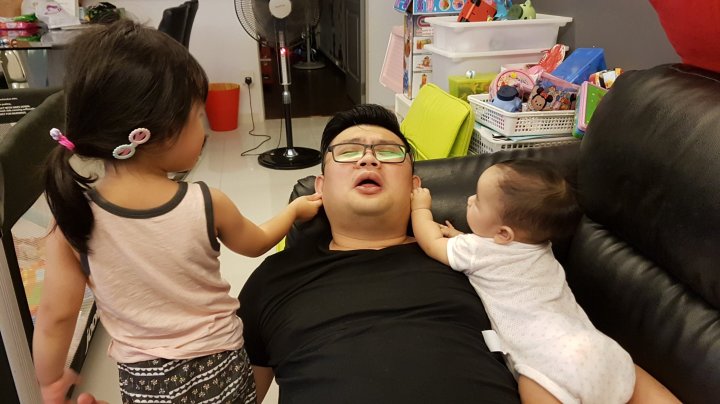 Haha and they joined forces to disturb Daddy this evening. 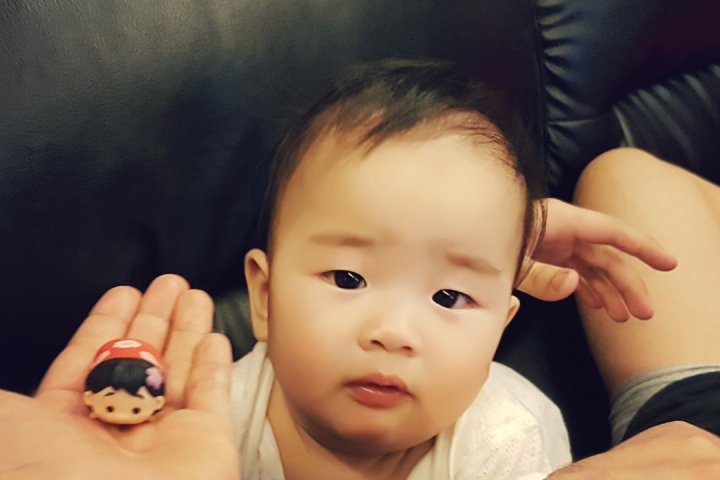 The more I look at the Lilo tsumtsum figurine, the more I see a resemblance. 🤣

What a day it has been.

I felt so bad for Clarissa as I applied cream on her swollen hand after her shower tonight. It felt so stiff and hard and painful.

She was switching between grouchy/whiny and her usual self today, and I know she tried her best to keep her spirits up.

She was playing Lego with one hand and at times got discouraged and told me in despair, “I want my other hand to work!”

Or she’d tell me, “Mummy I feel so bad about my hand.” to stop herself from losing her temper.

After her shower she momentarily forgot about her swollen hand and told me about school.

“I smiled at J but he didn’t smile at me. So now I don’t smile at him anymore,” she said to me, sounding a little sad and a little too grown up at the same time.

J was her best friend from her N1 class, but is now in a different class.

“Maybe he didn’t see you smiling at him?” I suggested.

“No, he saw me but he didn’t smile back. So now I say hello to CL instead.” She smiled as if it was a clever thing to do. 😅

“I think J forgot about me already. I think when we go to primary school, I will still remember him but he would forget already,” She told me, shrugging her shoulders like a little big girl.

I hope you’d wake up with a better hand tomorrow.