So this happened just 4.5 hours ago.

We decided to have dinner with Clarissa and also wait for my sis to be here before leaving the house.

Clarissa was taking ages to finish her dinner, so I asked the hubs to get changed first.

He showered, came out of the room and attempted to put on the basketball jersey he wore to brunch this morning.

He did so, reluctantly.

When I got changed into a black midi dress and denim jacket, he said, "Need to wear dress meh? I thought you are going to wear the same adidas t-shirt you wore this morning."

I told him, laughingly, "Huh watch concert leh can wear a bit nicer? Don't dress up, you say 黄脸婆. Put on a dress you say wear t-shirt?"

We barely made it through the traffic and bad crowd control.. And sat down 30 seconds after the concert started.

(In case anyone's going, it started on time.)

My JC buddy had bought the tickets for 5 of us but wasn't able to secure 5 seats in a row so we split up.

The hubs and I sat with my JC friend while my buddy sat with his wife.

He sang a lot of Cantonese songs.

In fact I didn't know half the songs he sang before the encore. 😂

But it was still enjoyable because Jacky Cheung is a very solid singer.

And then he started singing my all-time favorite song.

I took out my phone to take a video of him singing it.

Before the song started he told the audience that he was going to play the same game he did in his concert last year.

They'd catch couples on camera and give out one grand prize.

The first couple to appear on screen was my buddy and his wife, but they kinda just stared blankly? Lol.

And the next couple was us!?

At this point it was a blur because I was still reacting to seeing my friend on screen.

And then my other friend sitting next to me kept pushing me towards the hubs and saying, "Kiss! Quick! Kiss!"

So we kissed. A quick peck. And we kept laughing.

After our 10 seconds of fame, my friend told him HE was going to kiss the hubs if I didn't. 🤣

He'd gone to the concert last year and said that the couple that won had kissed.

After us, many of the couples caught on camera also kissed. It was quite funny.

Hahahaha I caught the entire song/game except ours.

Somewhere in the middle of the concert, one of the staff approached the hubs and said, "你们中奖了!"

Without really knowing what the prize was. Haha.

My friend said it should be an autographed photo like that of last year.

He was so excited about us winning it.

We were very happy too.

At this point I said to the hubs, "Wah luckily you didn't wear the basketball jersey?"

I thought we were just going to collect the prize after the concert.

And I saw something strange yet familiar. 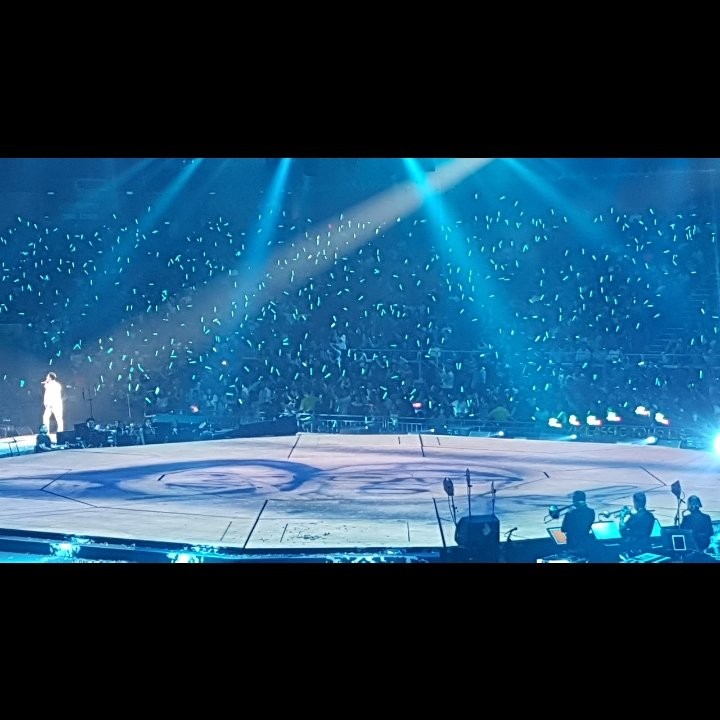 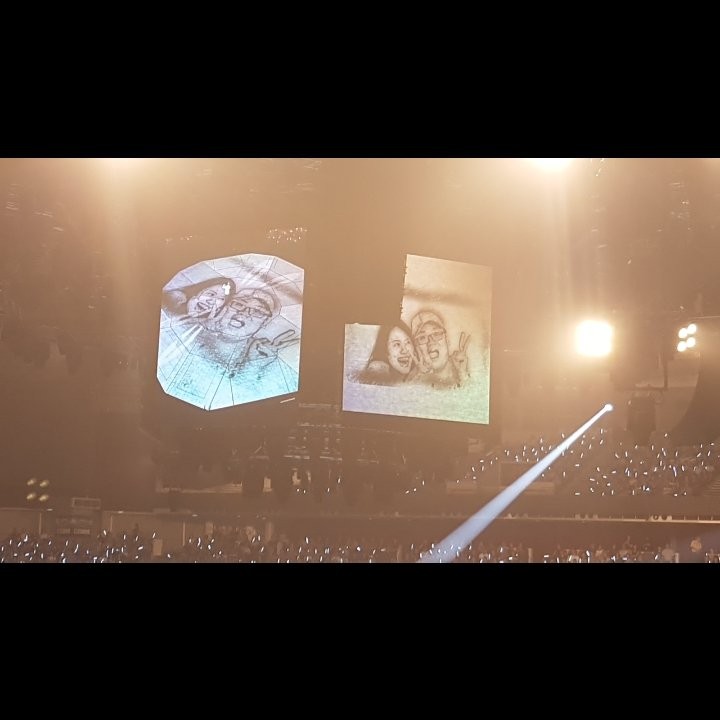 And then we were on screen.

We were almost hysterical. 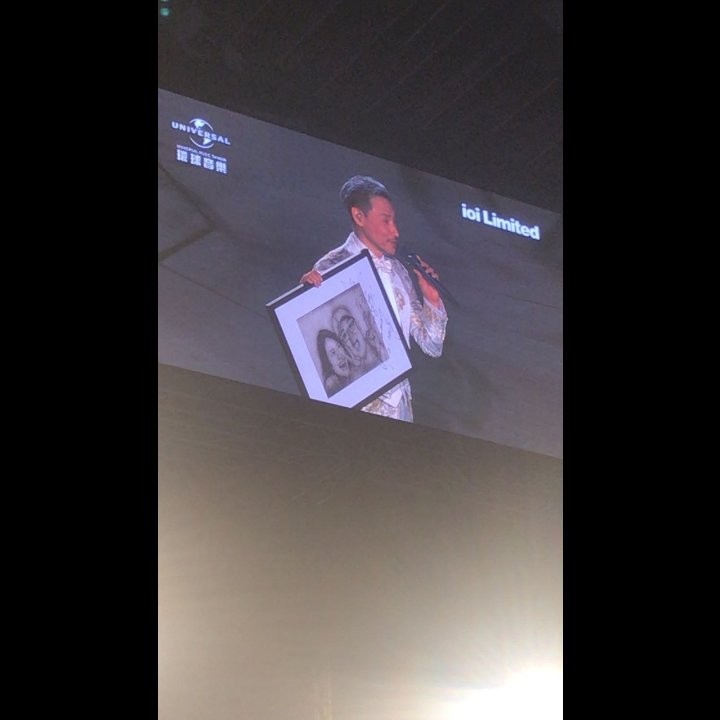 Jacky Cheung looked at our picture and said we must have been chosen because the photo looks cute.

It'd captured that moment when we first realised we were on camera.

He then asked where we were seated, and everyone around us started shouting, "这里! 这里!"

He found us and started talking to us?

The hubs showed his wedding ring; I nodded.*

And then he signed our photo frame on stage.

I wish I took a video of it! Hahaha but obviously can't. Photos taken by my friends.

He also added that only one couple gets this for each performance he makes on this Classic tour.

We are the 138th couple because tonight's his 138th performance for this tour; and we are the one couple out of the 10,000+ audience.

I've never won a lucky draw in my life, but this is so much better. 🤣

The hubs turned to me and said, "Luckily I didn't wear the basketball jersey!" 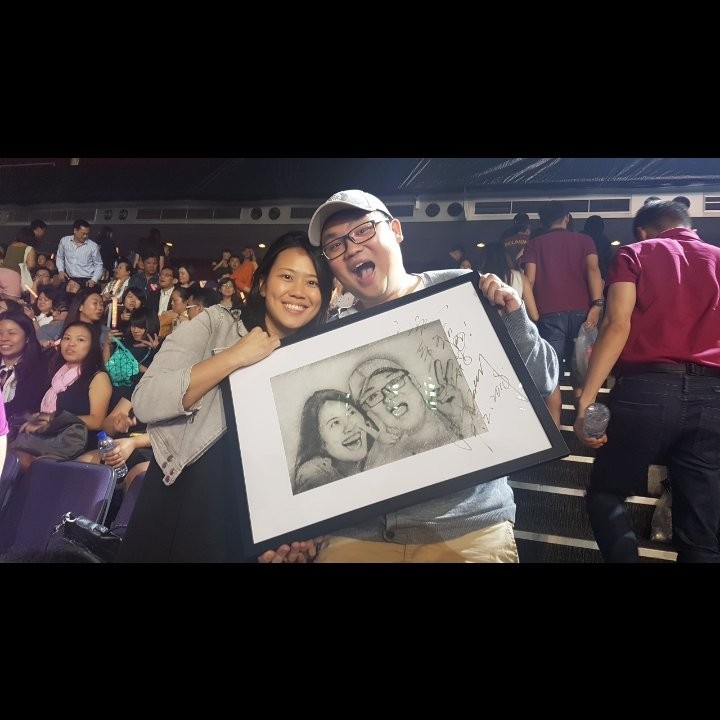 Later on, the same staff came and handed us the autographed photo frame.

He asked us to fill up our details and we are indeed #138 on the list. He then took a picture of us holding the frame.

On our way to the carpark, we had people calling out to us and congratulating us lol, and telling us to buy 4D.

A few even asked to look at the autograph.

Hahaha literally our 5 minutes of fame.

We came home to 2 sleeping kids, both tucked in, thanks to my Dajie and our helper.

I showered and pumped and told the hubs, "I think I should write about this first before I sleep."

He said, yes sure, go ahead.
We said good night, and he fell asleep.

Yet this song is still ringing in my head.

As my friend KPH reminded me, I actually was thinking (and wanted to shout out to Jacky), "我是两个孩子的妈!!" when he asked if we were married. 😂

I still can't believe we won. 😆