Hahaha all the photos turned out blur because she was moving and kicking a lot while trying to talk. 😆

I went into her room at 9am after hearing a loud chuckle from her lol.

When she saw me she looked like she was bursting to tell me everything and kept giving me her megawatt toothless smile. 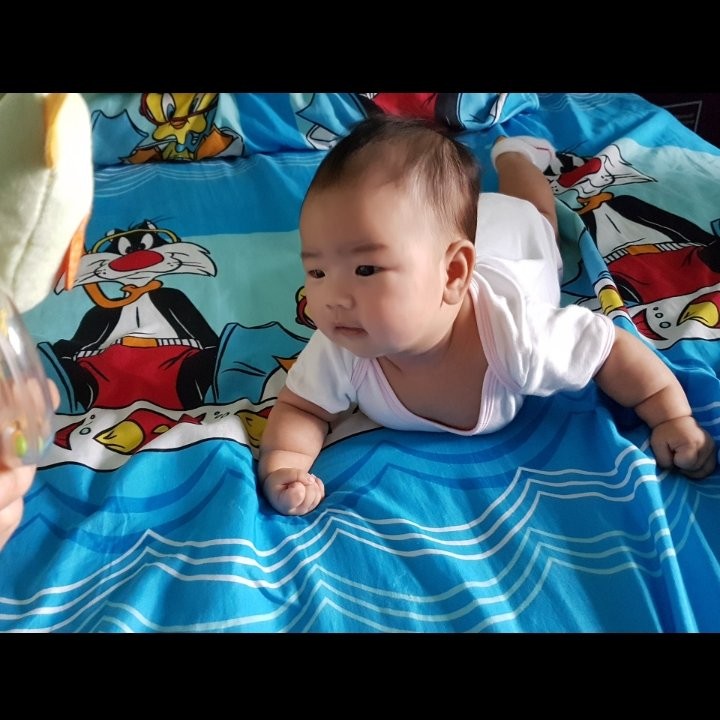 Yesterday was a bit of a crazy cat-nap day.

So I got her to do tummy time, hoping she'd sleep after her feed.

It didn't help that the aircon servicing guys were here yesterday and she couldn't sleep through all the noise. 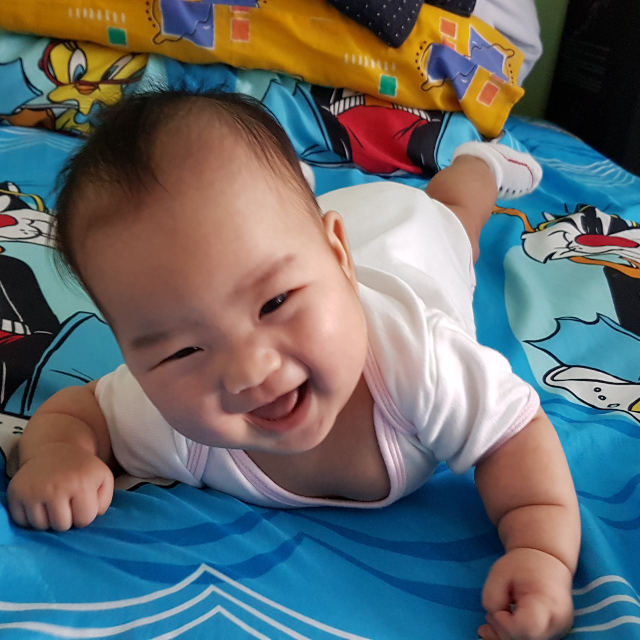 So tummy time again! And again!

I've also been removing her mittens for short durations so she can get used to griping with her fingers. 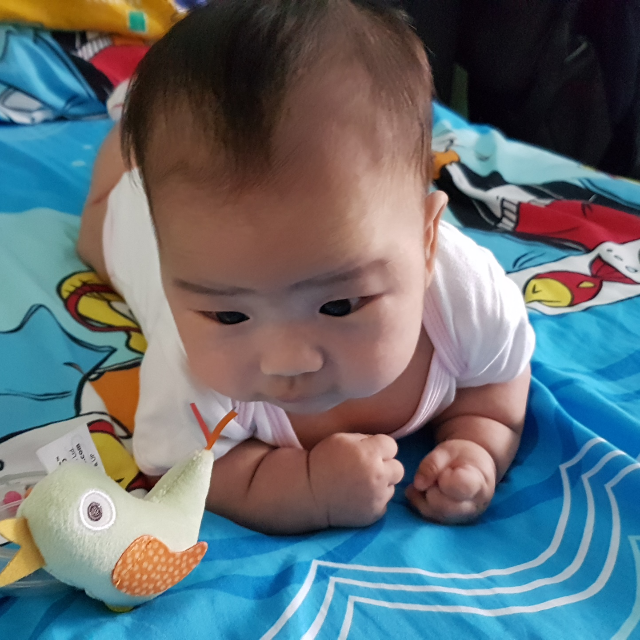 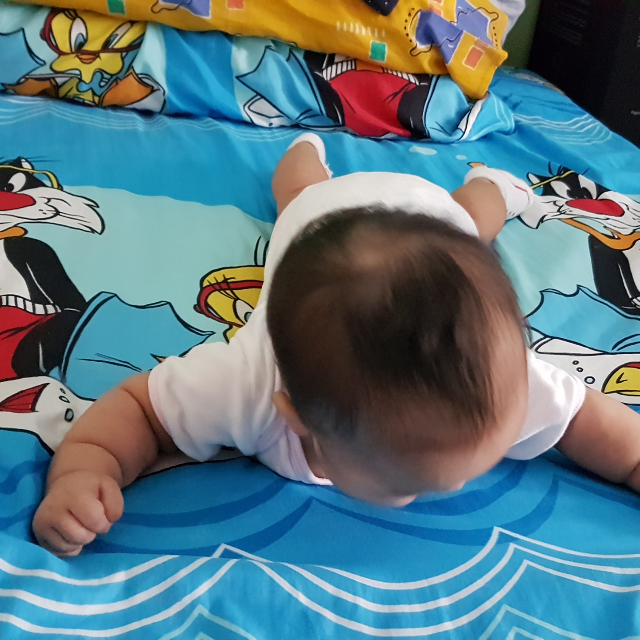 By 6pm I decided I should let her drink her milk and make her sleep.

I'd usually look after both girls until our helper is done cooking, but yesterday I thought I should try to make her sleep because she was on the verge of being fussy.

Clarissa was playing with her playdoh and it usually occupies her for a long time.

So I told her I was going to feed Meimei and make her sleep first, and then I'd be back to play with her and prepare her for dinner.

She said ok, later you come out and eat the breakfast huh.

(Lol she was making strawberries with her playdoh.)

I said okok I will.

She came into the room in the middle of the feed and announced that breakfast is ready.

Meimei was already dozing off so I said okok I'll be there once Meimei sleeps.

So she left the room.

Meimei fell asleep before she finished the milk so I was about to put her onto her cot when I heard a very loud cry.

It was Clarissa, wailing and sobbing in the living room.

I heard our helper trying to tell her, Mummy is at home! In the room! You can go and look for her!

I figured she cried because I wasn't there with her.

She came into the study room with teary eyes and all, while I tried to rock Meimei back to sleep.

It didn't work so I put Meimei in the sarong, said sorry to Clarissa and asked her to wait again.

And then Meimei started crying whenever I put her into the sarong.

So I tried to rock her instead and was achieving some success when Clarissa came into the room again to tell me she fell down from the sofa.

She basically just slipped so it wasn't serious. I guessed she just wanted some attention.

At this point, Meimei was just.. awake.

I simply waited for our helper to be done to take over while I went back to Clarissa.

I hugged her without saying anything at first.

She started explaining, "Because mummy is not here.."

I told her I was sorry to have kept her waiting, and explained that Meimei needed to sleep because she'd get a headache if she got over-tired.

She nodded and said, "Meimei must sleep so she can grow taller and taller!", her two hands stretching further and further apart.

"If Meimei never sleep, she will become smaller and smaller," She went on, her hands moving closer and closer until there was just a tiny gap between them.

Yes, I said. So that's why Meimei needs to sleep. 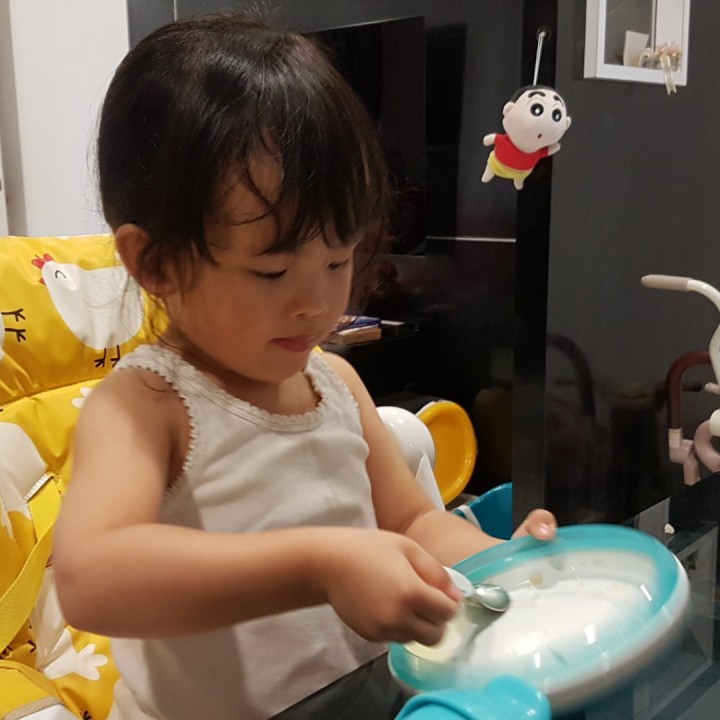 Perhaps to make up for her earlier outburst, she ate her dinner very well.

Finished in less than 30 minutes, all on her own.

She kept telling our helper, "Dinner is very nice! Thank you for the food!"

And it wasn't fried rice or chicken rice lol. She willingly ate all the vegetables too.

And then Meimei started fussing again when our helper was having her dinner so I went in to attend to her.

During that time, Clarissa came in to inform me that she wanted to poop, helper finished her dinner, Clarissa finished pooping (and came in again to inform me, without her pants 😂), helper washed her up, and the hubs got home, earlier than usual!

So the evening got better as we took turns to attend to both girls.

But I reminded her of her earlier outburst, and explained to her all over again.

It's more to assure her that we are always here, but sometimes we need her help and understanding.

I try not to tell her how she's a big girl already and that she should do this and do that.. because she's really just 3?

It's stressful for her to have so much expectations heaped onto her, just because she happens to be the older sister.

When I asked her what made her happy, she put a finger on her chin and said, "Hmm let me think huh.."

It took her a while, and she said, "I'm happy because Mummy loves me so much!"

I wasn't expecting that.

I was feeling a little sad when she paused for so long. I was thinking about how she had a rough day and even playdoh couldn't make her happy.

We ended up laughing together because she cheekily combined the spelling for "Clarissa" and "Mummy" in one word and she was so tickled by the way I pronounced the new word.

She woke up at 645am this morning and came into the study room as usual.

I asked her where she wanted to drink her milk, and she said, "My room."

She giggled and whispered, "Ok we let Meimei sleep alone." 😅

I stood in the living room while she walked to the kitchen to get her milk.
She asked me to wait for her there, and added:

You don't cheat me and go to another room huh!

She threw a little tantrum later on when she couldn't find her mama duck.

I found it, and patted her head but she didn't like it and went, "Don't touch my hair!"

So I told her, ok I'll leave the room.

When I went back to her, she had already finished her milk and was staring at the bottle with a forlorn look on her face, like she was about to cry.

She looked relieved when she saw me.

"I thought no one is coming to take my bottle," she said to me.

I asked her if there was something else she wanted to say, after telling me not to touch her hair.

She looked a little embarrassed and considered for a while before she said, "I love you Mummy!" and gave me a hug.

Lol I suppose that was an apology.

I slept a grand total of <30 minutes today because Meimei was crying in the middle of our nap. And this was after waking up at 430am today.

Was looking forward to sleeping early tonight so I could hopefully get a 5-hour block.

Started pumping after Clarissa slept.. but before I finished pumping, the hubs was already fast asleep.

So I'm now going to stay up until at least 1130pm to do the last feed.

And tomorrow is Saturday. Which means, no rest. 😩