She was using her legs to push herself forward and her neck up.

At first she was even smiling but I didn't have my phone with me – I only went to grab it when our helper excitedly asked me to take pictures. 😂 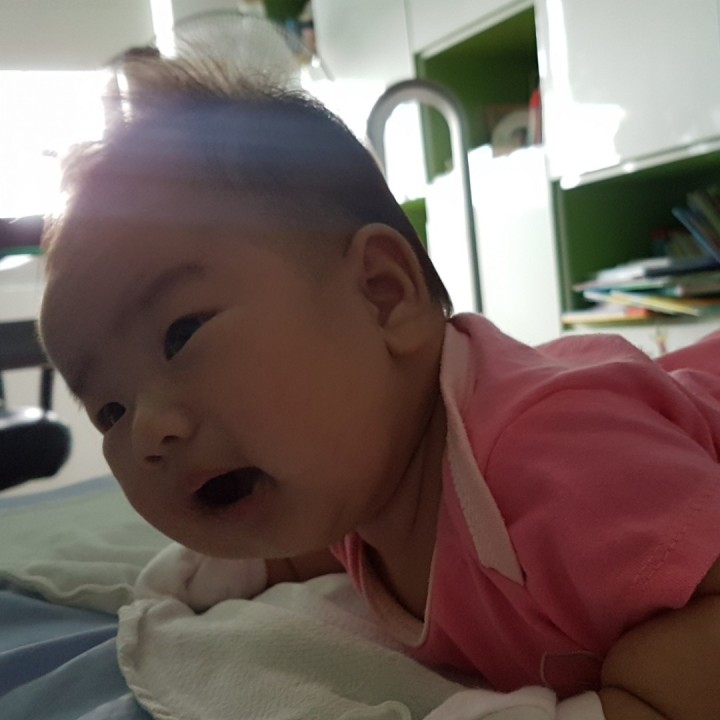 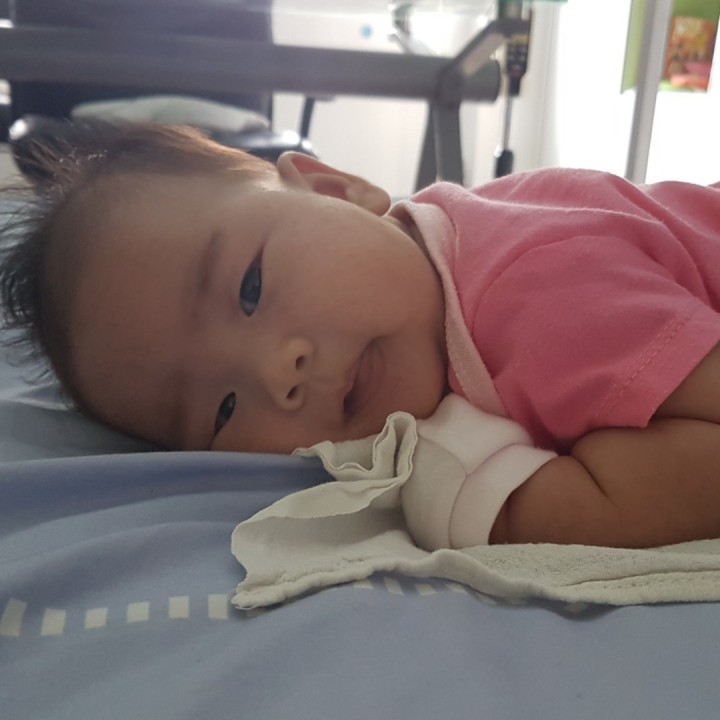 I'm not sure what came over me but I was so tired this morning.

I slept at 11pm, woke up at 230am to pump, finished at 330am, went to Allie's room to lie down and wait for her to cry for milk, jumped up at 5am because she started crying without warning, made milk, fed her, went back to sleep, jumped up again at 645am when Clarissa came into the room, went to her room and lay down beside her to watch her drink milk, dozed off, woke up again when she was done, asked her to get changed..

I usually am half awake by 5am and can function until noon?

Not sure if it's because I've a swollen left eye lid (hence eye almost closing 😂) or because I was having weird dreams during the 330am-5am stretch.

In fact I was so tired at 5am I scooped Clarissa's milk powder into the bottle instead of Allie's.

Luckily I realised my mistake very quickly and only wasted one scoop. 😅

Somehow Allie was very sleepy too? She stirred when her Jiejie burst into the room but went back to sleep, all the way until 9am. 😁

I really hope I can get my energy level up again.

It's been nearly one year of low energy. 😅😂

I haven't had time or mind space to think about this new year.

I don't have a habit of making or writing new year resolutions, because I'd break them anyway.

But for the past week, I find myself thinking about it, on and off, never quite completing the thought(s).

Staying at home for the past 3 months, with another 4 months of maternity + paid + unpaid leave planned until I return to work in May makes me feel like I'm in limbo.

Seven months feel like a long time, even though that first month of hospitalization leave was unplanned.

With Clarissa I took 6 months off too, with almost a month's break before I finally delivered.

I returned to work when she was 5 months old and to be honest I didn't feel quite ready then.

Hence with 2 kids I thought I should definitely take at least 6 months off to settle things.

Some people gasp, because it's a long time to be away from work.

But the girls are not going to be newborn / new Jiejie again. I won't be able to turn back the clock to be here for them if I'm not here for them now.

Even though the monotony gets to me sometimes. I feel like my brain isn't really working and it's a vicious cycle because I already have a pregnancy/mummy brain to begin with. 😂

Hence I actually entertained thoughts of having *a few* resolutions.

1. GET MY ENERGY LEVEL UP

Or at least, feel less lethargic.

To be achieved via:

With Clarissa I only started again after I stopped pumping + 1-2 months later. So she was nearly a year old when I went to the gym again.

I *hope* I can start earlier this time, hopefully before i return to work.

And when I return to work, I hope I can schedule a quick run at the gym either first thing in the morning or during lunch time.

Get away for a few hours a week on my own, whether it is to stare into space in a coffee shop or to walk somewhere mindlessly.

When I return to work, I can/will resume my me-time lunch-time.

And also, utilise my massage and facial packages that I signed up years ago and left untouched because going for these just wasn't on my priority list. 🙄

2. SPEND QUALITY TIME WITH THE HUBS AND BUBS

With the bubs it's easier now since I'm at home and I do spend time playing / telling stories / chit chatting before bedtime with Clarissa.

Though I'm also guilty of giving her the tablet whenever I pump or need a 20 minute breather while I shower or do something.

Hopefully more playground or outdoor time with her, and when Allie is bigger I can bring her along in a carrier or stroller. 😀

It'd be a different story when I return to work but I guess I have to work it out.

With the hubs it's much harder.

Dates are out, because I'm not comfortable leaving both kids at home with the helper.

He works late and sometimes he gets home at 9pm when I'm about to do bedtime with Clarissa.
And then Allie might cry just after we say hello to each other. 😂
And then I sleep by 11 while he stays up till 12 to do the last feed.

Sometimes he suggests watching a show together.. And I doze off in the middle of it. 😅😂

So now I say, maybe not.. And go to sleep because it's the only time I can get a 3-hour stretch of uninterrupted sleep.

I don't have a solution for this. 😂

But I guess it's about being more mindful and at least spend time talking to each other.

My biggest fear for our marriage is that our relationship becomes like that of our parents', always unhappy with each other.

To be honest, it's very hard to maintain a relationship with kids in the picture, yet a strong marriage is a necessary foundation for our kids to grow up happily.

I prefer not to ask for help so i guess for now it needs to be about quality communication (and hope he doesn't work late so frequently).

Recently the hubs is thinking about taking up singing lessons.

Which got me thinking and realising that I don't really have a hobby, or something I enjoy doing.

Except writing, reading and Korean dramas.

Out of which I'm doing only the first one more consistently, even though they feel like just word dumps at times.

At this point I realise that Resolution #2 and #3 are quite contingent on getting Resolution #1 done right. 🤔🙃

The point of keeping a hobby is probably to keep a semblance of "self", being kind to myself and doing something for myself even as I work on being a wife, a mum, a daughter, a sister, a friend, a manager, an employee.. among many many other things.

And online shopping, does not count. 😂

I guess for now..
📍Dayre
📍Read something meaningful
📍Spend time with people I enjoy spending time with

I might end up not doing any of these but at least I got my thoughts out here. 😂

Am switching up my pump schedule today (for Resolution #2) so I can pump after Clarissa sleeps tonight.

Did not manage to nap at all today because Allie was fussing quite a bit.

Her daytime naps are quite short. I tried to read my past entries to recall what Clarissa's daytime naps were like at 2 months old, but I didn't write much about it except that my mum bought her a sarong at 6 weeks old. 😂

My mum couldn't handle the cat naps Clarissa was taking and we kept changing diapers for her because we didn't know why else she was crying. 😂

I know the sarong helped a lot but I didn't record any of her nap schedules before 6m. 😂

Anyway i managed to make her sleep and place her on Jiejie's mattress before I pumped and was watching the CCTV like a hawk while I was pumping.

Because there was drilling, loud noise from a tap and then thunder.

Her hands jerked a few times but thankfully she went back to sleep.

And I realised all the positions have changed.

I'd placed her head on the pillow, and a blanket and bean pillow on her tummy.. but they've all moved. 😂

Now that she's passed the one hour mark of napping I'm finally breathing and writing about it.

She was so fussy yesterday from 5 to 9pm and woke up again at 10pm, possibly because she didn't nap well.

I dare not write too much about her sleep schedules because as much as I love Dayre, the fear of #dayrejinx is real. 😂