My mum dropped by around 9am this morning to top up some supplies of wolfberries and whatnots.

She left after less than 10 minutes, but gave me a call shortly after.

"It's 9am. Why are you not eating mee sua? Why the CL never cook for you?" She asked me in her usual accusatory tone.

In my best neutral tone, I told her I'd asked the CL not to cook breakfast today because my FIL bought a lot of bread, so I had bread.

"BREAD?! YOU ATE BREAD?" She said to me like I'd committed a sin.

"Yes, sometimes I eat bread sometimes the CL cooks," I said.
Really tried my best not to sound irritated.

In the end I just said okokok when she insisted I should eat mee sua every morning.

Immediately complained to the hubs over WhatsApp and he immediately got a call from my mum.

As expected it was about the mee sua.

So my mum has 5 kids and 5 months of confinement experience.

Her notion of confinement is: lots of meals and lots of herbal nutritional heaty whatever. No shower, no washing of hair, and please don't even touch tap water.

According to her she'd start her morning with a simple breakfast of milo and chicken essence, mid morning meal of mee sua at 9am, lunch at 1, milo at 3, dinner at 7 and then some herbal chicken soup before bed.

In her mind this was what kept her healthy through all the subsequent pregnancies and even now.

No body aches, headache and ailments her friends who did not do confinement properly suffer from.

Unlike me, only 2 pregnancies but so many problems with my back and my health.

She hates the CL we had during Clarissa's time so she thinks everything I'm suffering from now is because she did a bad job.

Hence to her, now I have to have the same routine, otherwise I'm not considered to have enough nutrition.

She kept telling me to just eat, don't be scared of gaining weight.

Which is.. totally missing the point.

I don't care about the weight at this point. I'm already at my weight during the first trimester since I didn't gain much to begin with.

It's just that.. There is only this much I can eat. And if I have time in between meals, I'd rather sleep.

I don't care about confinement food too.

I bought the herbal package and everyday there is some kind of soup which I drink without fail.

They don't taste nice, but I don't mind.

I eat whatever the CL cooks.
Sometimes I pick out the ginger because I hate ginger in my food, but I have to say I'm pretty good with finishing the food.

I'm quite easy going overall and I try not to be a rebel because it's tiring trying to fight over food, when there are so many other things I need to fight with.

Red date tea does not quench thirst and makes me even hotter (not the sexy way, sigh) than I already am, after all the soup and gingery food.

But hot red date tea is actually nice for the late night and middle of the night pumps so I drink most of it at night.

For the rest of the time I drink plain water.

(This is something my mum also warned me against.)

Confinement is uncomfortable because you have to eat all the heaty food and yet wear long pants and socks and avoid wind / the fan.

The food doesn't affect me as much as the heat. And I can't shy away from wearing the long pants and socks nonsense because this is something everyone can see.

So I compensate myself by staying in my room with the a.c. on as much as I can.

I sneak in a shower and wash my hair when the CL is occupied.

Only the hubs (and Clarissa) know about the showers I take, while the CL still prepares the herbal water for wiping down every night.

I could have gone out and said I don't need the herbal water nonsense, but for the sake of peace and harmony in case my mum checks with the CL, I choose not to.

It protects the CL from unnecessary accusations too, because what she doesn't know won't hurt her.

It's totally unhygienic not to shower.
How do you "wipe down" your wound area for instance?
Ewww please.

Anyway this has been my coping mechanism so far with confinement, and I think I've fared slightly better than the last round.

But this mee sua thing today just threw me off and got me very upset.

I tried to sleep it off, but I woke up to find this text message from my dad. 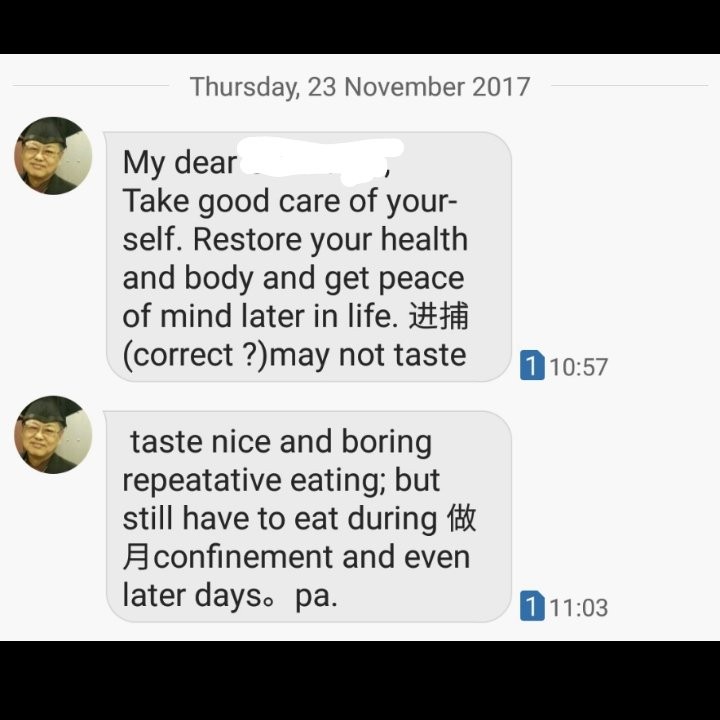 Knowing how my parents operate, my mum must have called my dad to nag and force him to also send a message to me, so they appear to be united in their views.

My dad didn't even have a reaction when the new CL said hello to him yesterday. He didn't ask me anything at all – it was as if he didn't notice the two CLs are different people. 😂

Now this got me quite mad.

When would my mum start realising that just because we don't do things her way does not mean it's the wrong way?!

Just because I don't eat mee sua at 9am every morning does not mean I don't take in enough nutrition.

It negates all the effort I've put in so far, especially to eat the stuff she asks the CL to cook, that I don't necessarily enjoy.

So I replied to my dad with this:

"Father, everyday I drink all the soup and eat everything the confinement lady cooks. Just because I don't eat mee sua everyday does not mean i don't eat properly. Understand your concern but i think mum is very mistaken."

This is the best I can do.

Any more noise I'm going to send the CL away and stop all these confinement and meesua nonsense altogether.

Because all I'm trying to do, and need to do, is not to lose my mind.

On a brighter note,
in today's
Guess what she's drawing:

Pardon the poor lighting.
I had to rush to grab my phone to take the photo before she erased it. 😂

She said she has bigger eyes and legs as compared to Meimei. 😆