Adorable (but one-way 😅) interaction with her little sister.

"Meimei, I give you this toy. Come and take from me!"

She climbed up the cot to look at her sister, and her sister started to "eh eh eh" again.

She turned to look at me and asked, "Is it me?"

I said no, it wasn't her and that Meimei was probably trying to say something but she couldn't talk yet.

I carried Meimei out of the cot, and Jiejie asked me, "Can I touch Meimei?" Before touching her sister's cheeks, nose, hair and ears, really, really gently. 😍😘

It's still early days, since the adult to kids ratio is still 4:2 / 2:1, but so far our little Jiejie here has been mostly good.

She lets us carry the baby and gives us time when we ask her to wait for a few minutes while we attend to the baby.

And one hilarious episode when the hubs was out and we had a 3:2 ratio.

The baby was crying.
The confinement nanny was attending to her.
The helper was trying to help.
I was having my dinner.
Clarissa wanted our helper to play with her.

Our helper did, but she was obviously distracted. She asked Clarissa to wait.

Clarissa came to me and I too asked her for 5 minutes to finish my dinner.

She went into her room on her own to play.

Soon the confinement nanny was done cleaning the baby.

Our helper carried the baby and walked into Clarissa's room, but the baby started crying and our helper made an unintentional remark about Meimei not wanting to go into Jiejie's room.

Clarissa started singing her own made-up song with made-up tune and made-up lyrics that went:

I couldn't help but laugh.
It was quite funny and quite sad. 😂

I attended to her once I was done, and she was alright and didn't seem angry or anything.

So yeah she seems mostly ok with the changes at home, with occasional tantrums and whining.. but largely manageable.

I need to constantly remind myself to be even more patient with her.
Hubs says I've been sounding harsher than usual. 😯 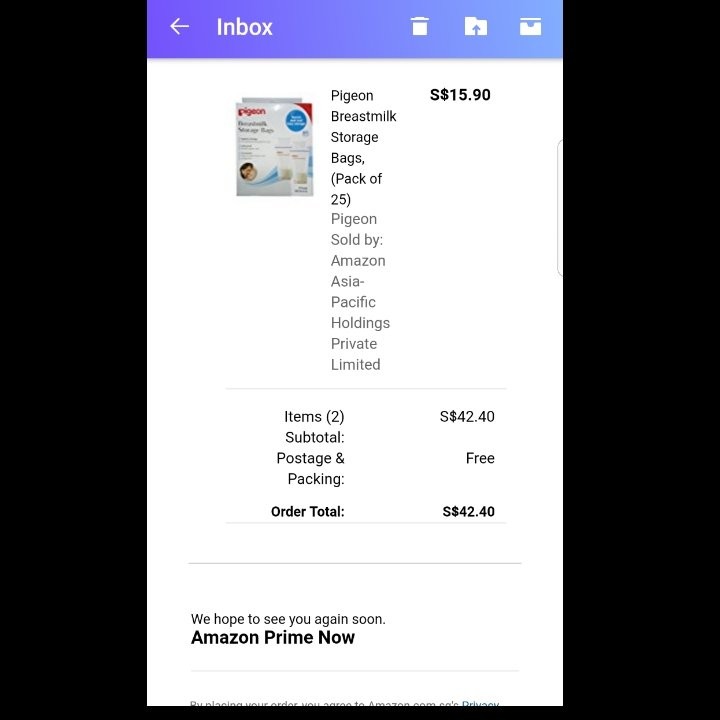 Amazon Prime to the rescue again.

We've officially run out of bottles, both storage and feeding bottles. I had to use Clarissa's bottle for the evening pump.

So, storage bags to tide us over.

I ordered at 7pm and they arrived at 9pm!

I'm not planning to freeze the milk this time – no space in the freezer and based on previous experience, frozen breast milk tastes weird when thawed.

Helpfully the baby can finish the refrigerated ebmilk in 3 days' time.

Her appetite seems to be growing everyday. She's drinking 75ml per feed, and today she's been feeding every 2-2.5 hours since noon.

Clarissa was on her top funny form tonight.

The hubs called my mum to get her help to buy some stuff over tomorrow.

And the bubs caught on, took over the phone and started speaking to her Wai-po in Chinese.

Hahahaha yep basically she started ordering stuff from Wai-po, using all the Chinese words she knows.

She was speaking Chinese with an English accent and kept adding 还有， 还有.. And started making up her own words and laughing at her own joke. 😂

As expected, Wai-po got very confused and asked me what she should buy for her.

I told her not to get anything because she's just saying every Chinese word she knows. 😂

I think she's officially reached the age where she says and asks the darnest things.

Due to a screw up in scheduling, I did the post natal massage only after she came home from school.

She stayed away mostly, but when our helper went MIA somewhere in the kitchen she came in and watched the masseur wrap my tummy up.

She asked the masseur a lot of questions.

What is this?
Why must do this?
Eeeee why like that?
What's your name?

When we were done, the masseur started putting on her hijab.

"Why you wear this huh?"

And when she was almost done fitting her hijab, the little one said, "Now you become.. Auntie!"

Luckily the massuer is the friendly sort and she said, "Yah I'm a grandma!"

She laughed and told me her daughter is pregnant so she's indeed a grandma soon.

She looked super young to me!

So luckily we could laugh it off by making small talk.
Embarrassing otherwise!