Panda came along to the hospital this morning, because "Meimei hasn't seen Panda". 🤣 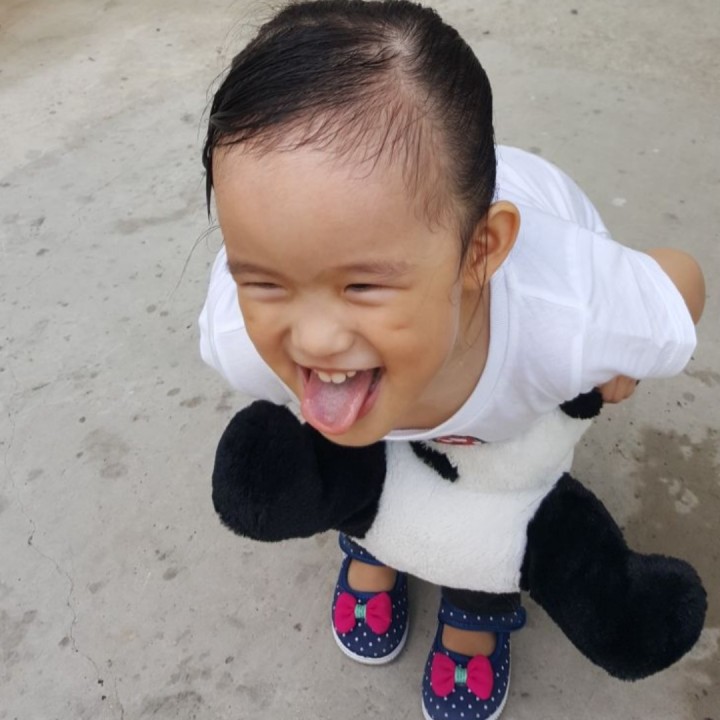 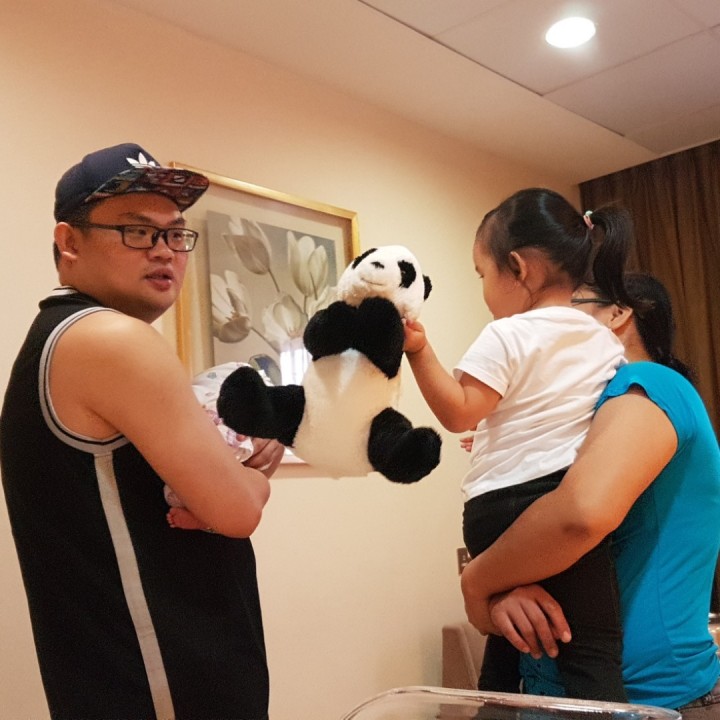 She was serious about showing Panda to Meimei. 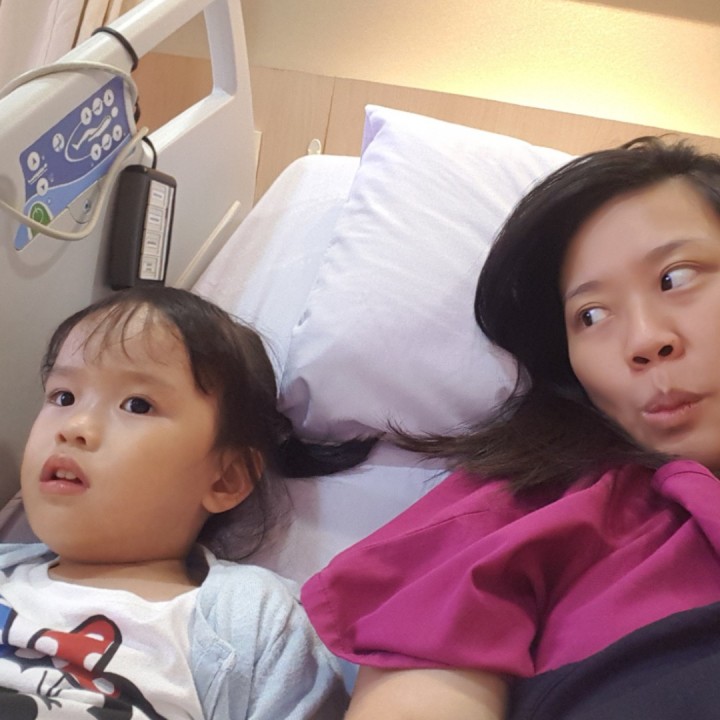 Managed to spend time with her.

She watched tv while lying in bed with me.

Later on, my bed became a slide for her. 😂

My dear friend came to visit and took this photo!

We have been trying the "ommm" thing we saw on YouTube. Whenever Allie starts crying, I'll go "ommm".. and I think it works.

So when Allie started crying, Clarissa started going, "Ommm".. and she looked so cute and serious, complete with the O shape mouth. 😁

It's 3pm now and I'm chilling in my room.

My FIL, the hubs' godma and sister came earlier with nice homecooked food.
The hubs came over with the bubs and helper.
My dear friend dropped by.

After they left I continued to hold Allie. Supposed to feed her but she was sleeping so soundly.

The nurse came to take her back to the nursery for her jabs and said I can feed her later.

Only latched her once this morning and it wasn't successful. 😂

But at least I know from experience now it's not the right latch?

I have some colostrum already and I know she drank it.

Other than that I think we are both content with just some skin to skin.

I'm determined not to go home with bleeding nipples this time. 😬

Yesterday right after the delivery, the midwife asked if I'd like to breastfeed.

But before I could say anything, the hubs jumped in and said, "No lah just rest today. Can breastfeed tomorrow!"

I really wasn't feeling like it so I'm glad he rejected the offer on my behalf.

The midwife said it's Ok, she only asked because some mummies want to do it immediately after delivery.

When I got to the ward and told the nurse I'd only start breastfeeding the next day, she gave me a pretty strange look.

Not sure if she was judging me, but I'm not too bothered.

Enough of this breastfeeding shaming thing.

I will breastfeed when the supply comes in, and pump if latching doesn't work.

The nurse who came in with Allie this morning was much older and not too bothered. She simply told me it's ok even she didn't drink anything because it's just to stimulate the supply.

Babies have food reserves for 3 days, she told me.

She didn't even really show me how to do it. Lol.

I guess it's because she's much older (like in her 50s) and comes from a generation where formula milk is not sin.

So she's more relaxed about breastfeeding.

Anyway the lactation consultant would be here tomorrow so I'll get a crash course then. 💪🤞

Right now I'm just trying to get as much rest as I can.

The wound and tailbone hurts but I'm able to get myself out of bed and go to the bathroom.

Wiped myself and changed into a fresh gown just now.

I might just take a shower tonight or tomorrow morning when I can stand for a longer duration.

Breastfeeding continues to be unsuccessful.

I think she is unable to suck. She would bite really hard on the nipple, and instead of sucking she'd keep biting.

It was so painful the nurse kept having to rescue me. 😂

With Clarissa, she could suck but the issue was that the latch was wrong. That was how I ended up with bleeding nipples by the time we were discharged.

Anyway this was a different nurse from the morning.

She told me she too had problems latching so she ended up pumping.

Seeing that I already have some colostrum, she gave me a syringe to collect it. Said it'd be a waste not to, and that she would give it to Allie.

And Allie doesn't have "reserves" lol.
Both times she started getting hangry and had to be pushed back to the nursery for feeding. 😂

The nurse kindly showed me how to collect the milk and told me, "wow you have a lot!"

So I continued to do it on my own while watching Thor on TV..

And I finally got..

这样哪里会饱? 😂
(Imagining myself saying this in my mum's tone 😂😂)

I managed to breastfeed Clarissa every 3 hours throughout the hospital stay, and she seemed to be drinking something because each session lasted at least 30 minutes.

If this was how much she drank, then I understand why she was so hangry when she came home!
She was like a different baby and we had to scramble to feed her formula samples.

I know there will be breastfeeding advocates and articles saying this is ok, it is the norm, breast milk is filling enough etc.

So take my thoughts with a pinch of salt yah?

I'm neither pro nor anti.

After having mastitis 6 times in 8 months of breastfeeding/pumping, I don't think breast is necessarily the best when it compromises things like health and sanity of the family.

I'm just going to do what I can, to the best of my ability. 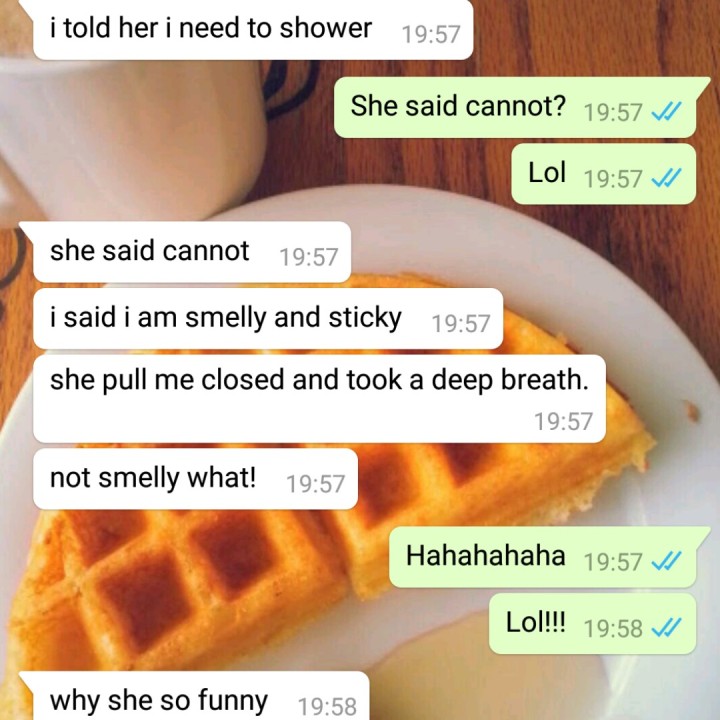 Is this true love or pure 捣蛋?
#lovebirds

Good that the hubs is at home with her!

We figured it's better this way.

He gets to rest properly at home and Clarissa gets his attention. 😉 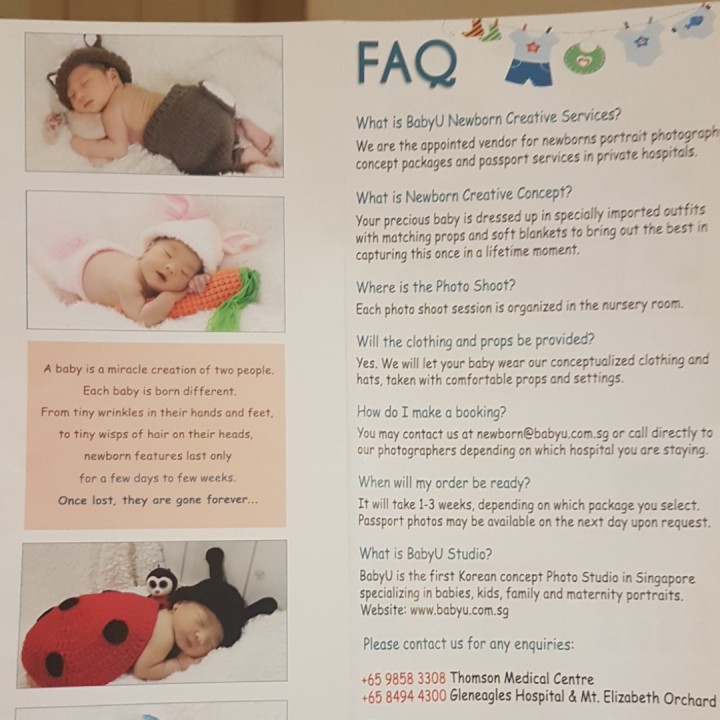 Oh, and I got a standard booklet package for a newborn photoshoot.

Honestly I'm too lazy to source for photographers to come to our place so this is great.

I made a scrapbook for Clarissa to document her development from tummy to delivery but there is none for Allie. 😂

But Clarissa doesn't have any newborn photoshoot done so erm I guess it's fair?

Apparently this company has been around and operating in TMC for 5 years already, but they didn't approach us when we were here with Clarissa.

They took the pictures within an hour of me confirming the package!

Previewed the photos from the camera before making payment.

And some of them look really cute!

Her eyes were open during the photoshoot and so were her dimples.

We get to choose 3 photos that'd be in the booklet and they will share the soft copies for all the photos taken!

Allie looks quite different from Clarissa lol and I keep feeling like I'm looking at the hubs when I look at her. 😆

Tried to breastfeed again because the nurse offered to help.

This time the latch is correct but it is painful because my nips are already sore from the previous biting sessions.

She's also not consistent with the sucking. She'd suck maybe 3 times and then give up because the milk hasn't flowed out.

So hangry until she was red in the face. Poor thing.

I asked the nurse to give her formula for the rest of the night.

She will bring her in tomorrow morning when the LC is here.

I told the hubs about it and he said, nvm lah just pump. 😬