What I've been up to:

I showed it to Clarissa when she came home from school, and she squealed in excitement when she saw the box of stationery.

"WAH! How come I have so many pencil bags?" She exclaimed. 😂

Erm you always have them.
Just can't see all them because everything was in a pile.

Cleared out and packed away clothes that are too small for Clarissa.

Erm and OCD-ly drew up a legend for the helper to follow, and explained it to her.

A few hours later, I found 2 pyjamas t-shirts in the long-sleeved t-shirts pile. And a pair of shorts was placed with the singlets for home. Jeans was with leggings. 😧

For 2 nights in a row, Clarissa has been waking up at 3am to grab her toys and coming over to our room.

The good thing is that she wasn't looking to play or party.
She came over to continue sleeping.

I guess it might be because she's feeling insecure, as we told her how she would not be able to sleep with us when Meimei is here.

So last night we tried to assure her that she doesn't need to worry because we will always be here.

And we let her bunk in with me.

Now I'm just worried about her when we are in the hospital to deliver the baby. Hopefully she won't wake up in the middle of the night to find that both of us are not at home.

We started toilet training on the day she turned 3 years and 1 day old. 🤣

Panties during the day and evening.
Diapers for nap time and bed time.

On Day 1 she came home with wet pants in her bag because she peed while changing out of her clothes in school.

Put her pants on again, and she clutched on to them tightly while pulling them high up.

5 minutes later, she started crying because she had peed onto the floor with her pants on.

Aye so she had been holding her pee.

I hugged her and told her it's ok.
We will try again tomorrow.

Yesterday she came home from school clutching her pants and pulling them all the way up again.
She kept pacing up and down the living room and didn't want to get changed.

I asked her if she needed to pee, and she looked worried.

Brought her to the potty and sat her down.

She tried to touch her privates to stop the pee from coming out, but I held her hand and told her to let it go. Lol.

We cheered. I brought her to the toilet to pour the pee away, let her say "byebye pee!" and press the flush button.

She was so happy she went back to her room and spoke to her toys:

Hello everybody! I pee in the potty you know? You know what sound I make? It's like Ppssssstttt… 😂🤣

The hubs asked her teacher about it and she said it's very common for kids to try to hold their pee when they start toilet training.

She has no problem knowing or telling us when she wants to pee, but I think there's something about sitting down and letting it out that worries her, similar to how she's uncomfortable pooping while squatting or sitting down.

So poop is still a problem because without the diaper she can't poop standing up.

She wanted to poop last night.
I took her to the potty and she made me tell her the "let it go" story (which is actually "Frozen" btw 😂) while she tried to let it go.

But she gave up after I finished the story.

This morning she let out a worried cry, "I want to poop!"

I said, "Ok you poop!"
Forgot that she couldn't poop standing.

Took the potty out but she protested and said she cannot.

I checked her pants and realised she had her diapers on.

I was surprised so I asked out loud, oh why are you wearing your diapers?

We'd already told our helper and also Clarissa about the toilet training plan.

It seemed like even the little boss herself forgot she was wearing diapers, because she was so anxious about not being able to poop while standing.

Helper quickly jumped in to explain that it was Clarissa who said she wanted to wear diapers in the morning.

To be honest, I was a little frustrated.

I know how assertive Clarissa can be and I know it's easier to do as she says rather than trying to negotiate with her.

And I know she's not the interfering sort (which is quite a double edged sword) so she'd just take the instructions and put on diapers for her.

But ultimately we are the adults here.

Surely she can't always let Clarissa have her way, just because she says she wants to do something?

Or at least check with me?

We are just starting out and we need to be consistent so she can learn.

It is more stressful for her than it is inconvenient for us. It's not hard to wipe up pee.

So to help her, we should not keep changing the conditions, like diaper one day and no diaper the next day. It's even more stressful this way because she clearly can't remember when the diaper is on or off.

😥😥😥
Ok end of rant and my very long #poopandpeestories

Here's a waffle eating photo to lighten the mood. 🤣😉

I've been either clocking 3 hours of sleep or waking up every 45 minutes / hourly at night, with barely 30 minutes nap during the day.

I usually do the admin or packing stuff in the morning and by afternoon I'm exhausted.

I'm not sure if it's the lack of sleep or the situations themselves but I find myself mildly irritated by things.

She shared a photo of her 2 newborn baby girls, and wrote about how blessed they are to have 2 more sisters for their eldest daughter.

Most comments were congratulatory messages, which is nice.

But one of them stood out. It was a one word comment, no "congratulations" whatsoever.

My ex-classmate is a very nice person so she replied a simple "Yes".

We are not close friends and don't really stay in touch, but still I was quite irritated by her friend's comment (even though I don't know her friend).

Erm my friend has already said she has 2 girls. They are of the same size, wearing the same swaddle, lying on the same bed at home.

What are the chances that they are picked randomly for a photo opt together?

And the tone (??) doesn't sound nice.
Please, she doesn't owe you an answer.
Especially since it's a stupid question.

At least congratulate her first, then ask your question, if you really must know?

And then there is this new thing called a "Mini-moon".

Apparently, it's a vacation for newly-weds.

I think we used to call that a "Honeymoon"?

I'm not sure what's so mini about their moon that they cannot be called a honeymoon.

Is it because it has to be someplace in Europe and last for a month before it can be qualified as a honeymoon?

As it is, life is already quite complicated.

The influence of social media in creating false realities and causing envy continues to be debated upon.

Is there really need to call a full-fledged holiday a "mini" one?

It's not like they went to Sentosa for 2 days. Even so it still is a honeymoon because it's the first trip together as a wedded couple.

A trip to Tokyo or Maldives for a week can easily cost up to 5K depending on which airline you take, where you stay and what you do.

There is nothing mini about them, unless you compare them to a 2 week trip around some luxurious parts of Europe or US.

It's none of my business and I don't understand their true intention, so I'm trying my best not to judge.

But may I feel slightly irked by it? 😂

Any holiday together is a good holiday. Size shouldn't matter.

If the point is to create envy (duh), by all means go for *honeymoon* in Maldives followed by a *holiday* in Europe. 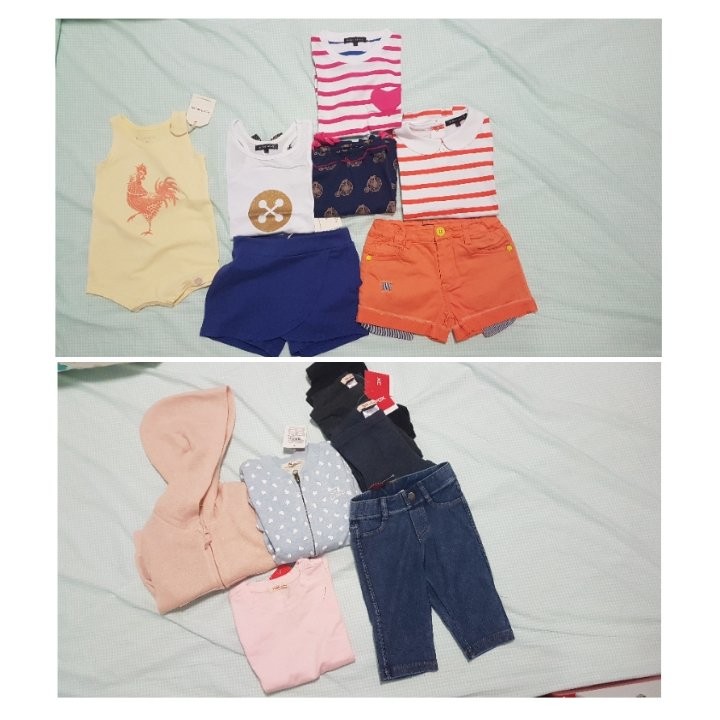 Not 1 but 2 deliveries today!

Both were having sale over the past week.

I wanted to buy the limited edition rooster romper for Meimei since it's on sale.. and then I went on to buy 6 more pieces for Clarissa. 😅

Tops going for less than $10!
I sized up so she's only going to wear them next year. 😂

My first time buying from them, because their clothes are a bit more expensive and I'm not sure about the quality.

Happy to say that the quality is 💯!

Fox was having 30% off for outerwear so I got 2 sweaters for Clarissa. Her school gets quite cold so we pack a cardigan for her everyday. She has 3 on rotation but they don't dry fast enough sometimes.

Also got pants for her – similar colours as what she has but one size up because they've become so tight now.

Random t-shirt and cropped jeggings also on sale so just #buybuybuy to get free shipping and additional $20 off $80 spent.

The model is happy! 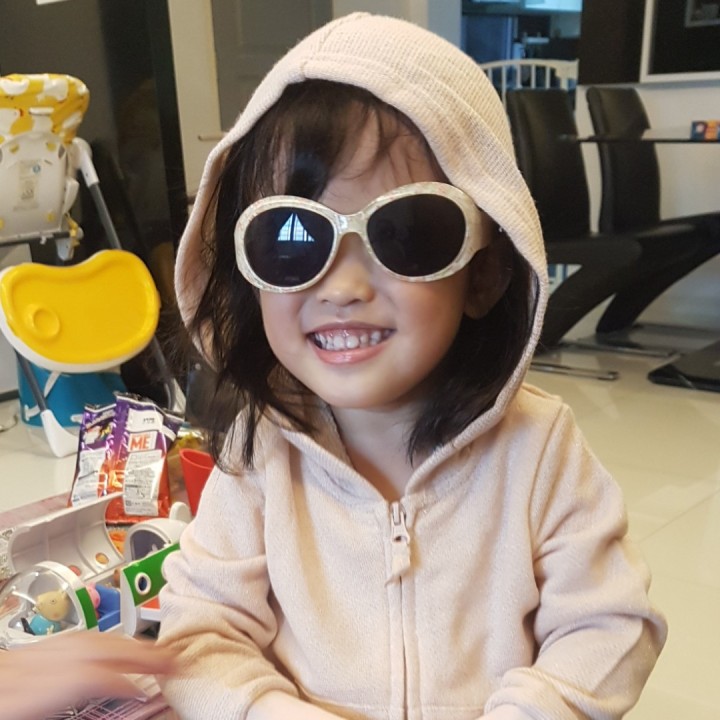 And then she put on sunglasses for the hiphop look. 🤣

Bought the other piece in Size 6 (the next size) because I'm kiasu. 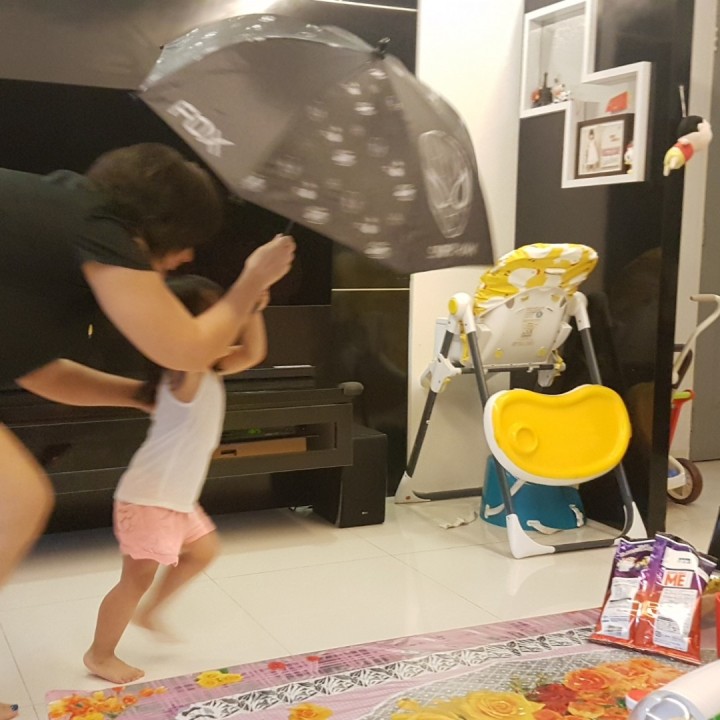 Lucky girl got an ice cream cake from Auntie O and we sang happy birthday in 3 languages.

So much has happened today and when Daddy got home at 9, she ran to him and summarized it very well.

"Daddy, today I pee and poop in the potty and I eat strawberry ice cream!"