The Epitome of 'Pregnant Brain'

Went to the toilet with a cup to do the pee test.

Peed but forgot to collect said pee in the cup.

We have a cheeky baby.

The doctor predicts that she might just stay in my tummy until EDD.

She didn't gain any weight since last week, so she's still around 2.8kg, which the doctor said is normal.

Everything else is good. Waterbag, placenta, heart rate.

So now can you please stay in there until after we celebrate your Jiejie's birthday? Please please? 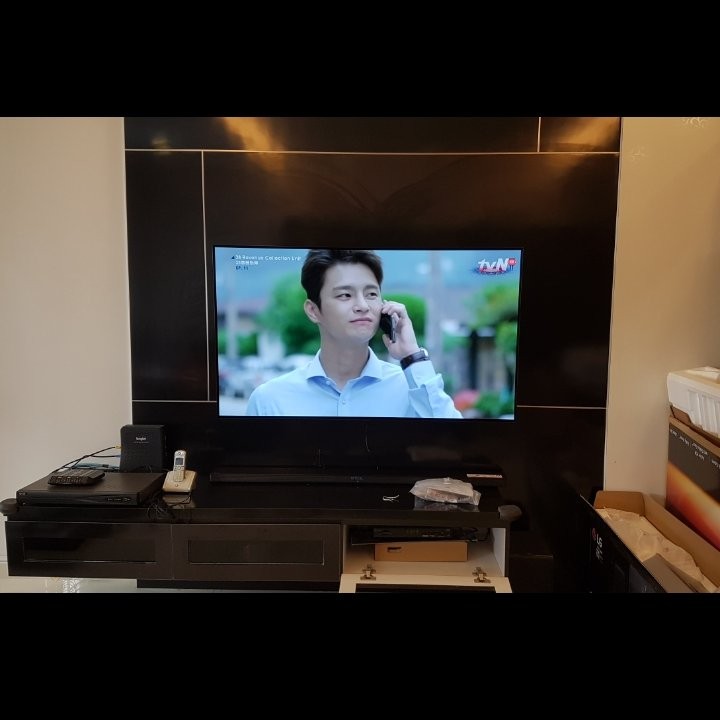 And our new TV is up!

And I forgot to take a picture of our old TV which has served us well for the past 7.5 years.

It's a 40 inch TV which my mum insisted on giving to us because she "bought a spare one".
Hahaha I don't know of people who stock up TVs.

It was a little small for our living room but we took it and used it! 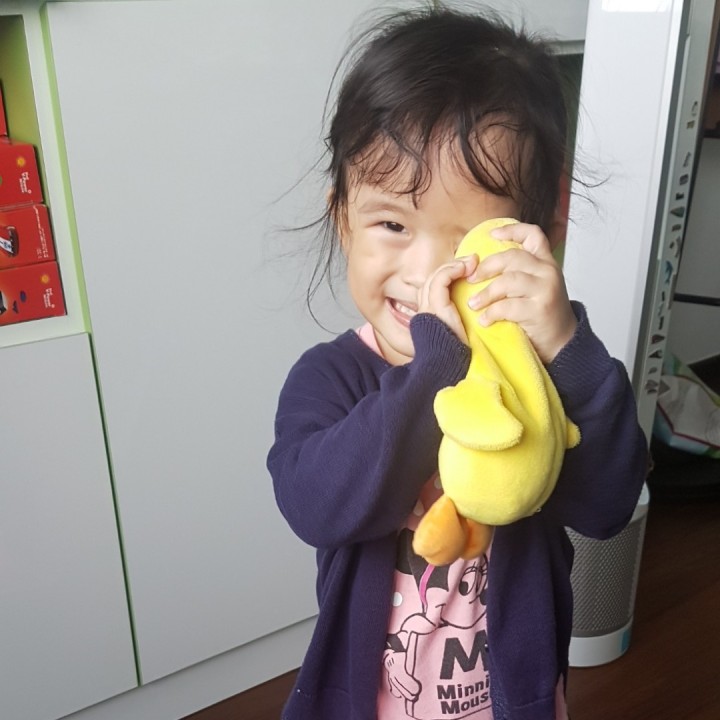 The minute she stepped home, I heard her say, "Wah new TV!"

Told the hubs about it and he asked if she asked for Peppa Pig.

I said no lah.

But a minute later she was in the living room asking me which remote control is the right one to turn on the TV, followed by the sound.

"Can watch Peppa Pig?" She asked. 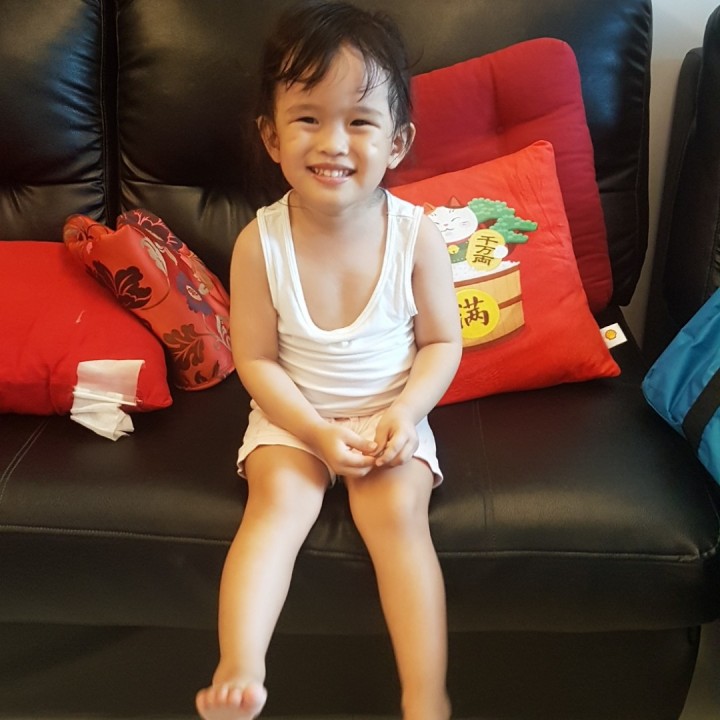 Got changed super quickly and sat on the sofa like this, waiting for me to turn on Peppa Pig. 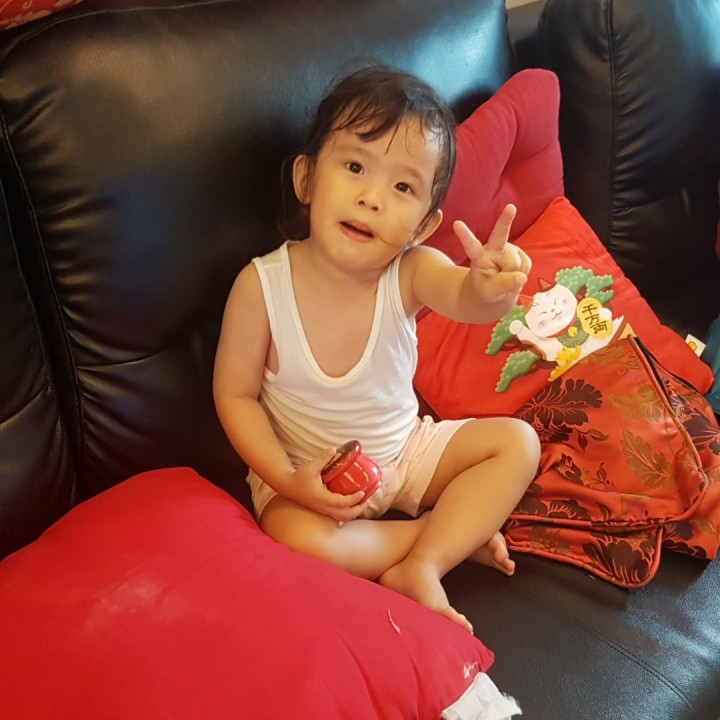 Told her the rules.

– Only when Daddy or Mummy are at home

She asked, "Not two Peppa Pig?" 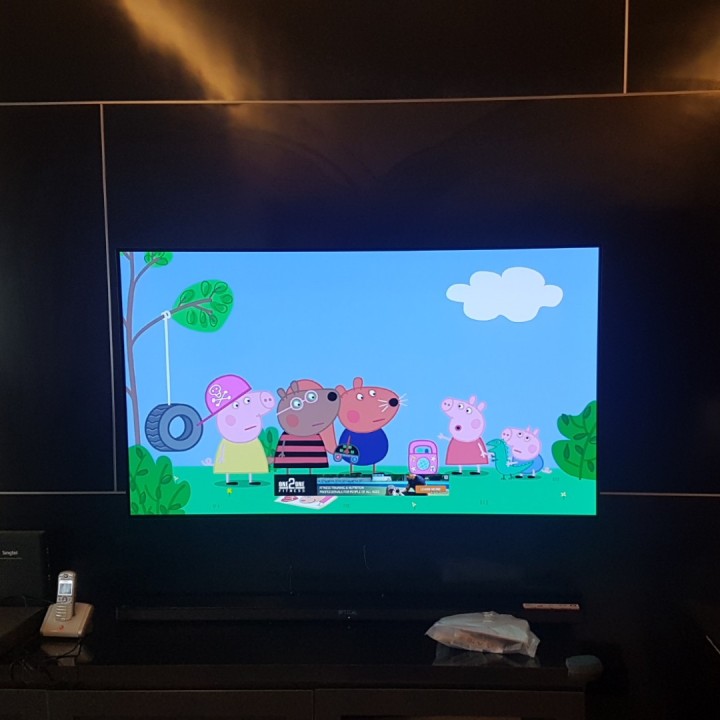 All her friends gracing our TV screen. 😂 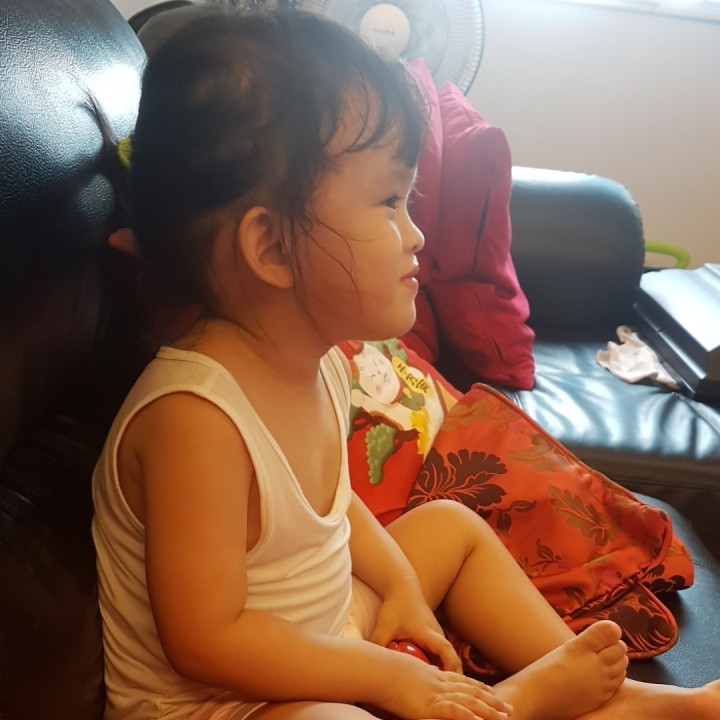 So my dad came over in the evening and Clarissa was with me in my room.

I'd spent the entire afternoon at my desk doing some stuff and then spent time with her reading and playing after she finished watching Peppa Pig.

My back and hips were hurting, and the little one in my tummy seemed to be performing some kind of acrobatics all day today.. so I really needed to lie down after I took a shower.

I asked Clarissa to go and sit with her Wai-gong in the living room, because Wai-gong came especially to see her.

She said she didn't want to go outside.

I explained again that my back really hurt and I had to lie down, but she said, "Then I should stay with you!"

So I tried a different approach.

"Clarissa, what happens if you go to Wai-po's place but no Yi-yi comes outside to play with you. How would you feel?" I asked her a hypothetical question.

I actually was expecting to answer the question on my own, but she actually thought about it and made a sad face.

Aww I didn't mean to do that darling.

But I continued, "You will be sad if you to go look for your Yi-yis but they don't come out to play with you. So Wai-gong will also be sad because he came here to see you but you don't want to go and sit with him."

She nodded and actually headed out of the room.

"Ok Mummy, I come and call you in 10 minutes ok?" She said to me before closing the door.

I'm not sure if this is the right way to teach a 3 year old.. but I'm quite surprised at her ability to understand emotions.

On the other hand though, she sometimes behaves like an angsty teenager. 😂

She loves the 730pm show for some strange reason.

We had to wait for her to finish dancing to the theme song before she was willing to take her shower.

When she got back from showering and changing, the hubs and my dad were trying to fix the HDMI cable.

So the TV was off and she couldn't continue watching her show.

Daddy and Wai-gong, you the bad guy!

She put on her best angry scrowl. 😂

I explained to her that Daddy and Wai-gong were trying to fix the TV, and that it was commercial break anyway.

"Why, when I come back it's commercial?" She asked, still unhappy.

"Daddy and Wai-gong the bad guy!" She insisted, and even named them. "You are Vector and you are Gru!" She declared, naming characters from "Despicable Me". 😅😂 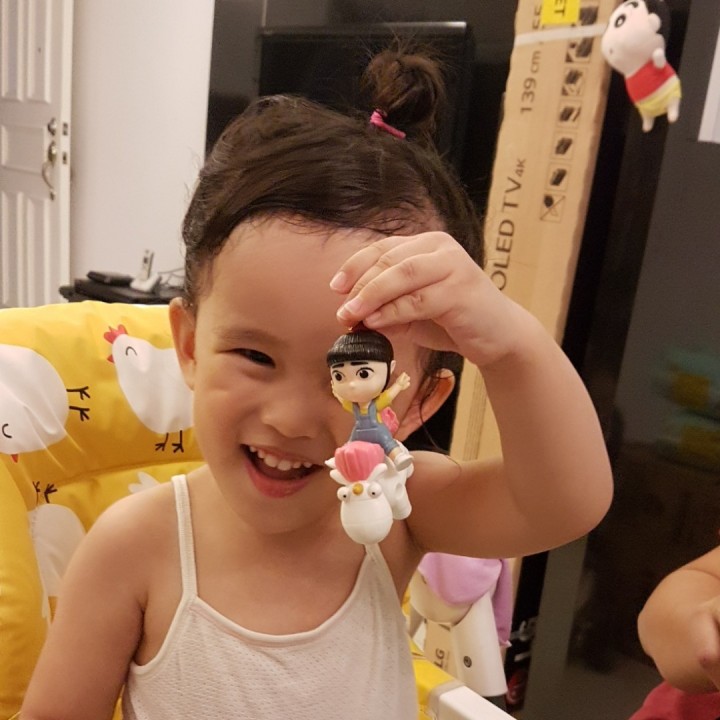 She asked me to tie "Agnes hair" for her.

It's really intriguing, how #toddlerlogic and toddlers' minds work.