This morning after she woke up, the little boss turned to talk to her Meimei.

👶: Hello Meimei*! When are you coming out?

While Jiejie was talking to her, Meimei made little waves in my tummy.

Such a sweet moment. 😊

Saw the doctor this morning.

He said I can stop all meds and let the baby decide when she wants to come out.

He has seen cases where after pre-term labour the baby stays past due date. 😂

We asked if we should induce, but he said there is no medical reason to.

But she is considered big so I should keep watching my diet in case she decides not to be an October baby.

Last week I thought of inducing at 37w (next week), because I cannot imagine doing this bed rest thing until 40w.

I think I'd go berserk.

It's so hard for me to do anything properly and I can't sleep properly either.

But I kinda prepped myself for the doctor's response.

So now I think I should just try my best to stay positive and not become too angsty or frustrated.

I find that planning a to do list for each day helps so I guess I'll keep doing that.

We've fixed the date to be 2 weeks from now, and I've ordered and paid for the cake and the hubs has taken half a day off to collect the cake and go to her school to celebrate with her.

But what if I deliver the day before or on the day itself? 🤔

We have discussed briefly about the hospital stay and thought it'd be best for him to be at home instead of staying of staying over with me after delivery.

But he needs to be there before and during delivery?

It sounds like a trivial thing to be worried about, but it's so important to the little boss.

So it's important to me as well!

She's been looking forward to it and I don't want to disappoint her. 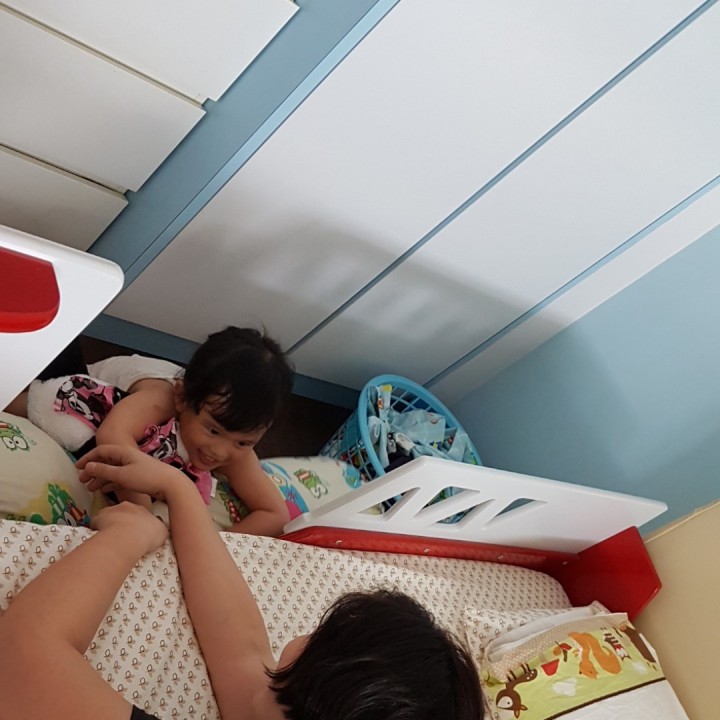 When she got home from school, I asked her, "Clarissa, guess who's coming?"

She paused to think for a second, broke into a smile and said, "Auntie O?"

We spent time playing together while waiting for Auntie O.

👶: What time is Auntie O coming?

When Auntie O appeared at the door, she was so happy and ran all the way to the door, and kept laughing and running around nonstop.

Dinner time was a breeze.

She asked us to eat together with her and told our helper that she would eat on her own.

She'd requested for fried rice the night before so she was very happy with the meal, and the company.

She finished everything on her own in under 20 minutes. 😁

So we either need to have Auntie O over for dinner or Yaya to cook fried rice every night to get her to eat so well. 😂🤣

She had so much fun she kept delaying bedtime and even asked Auntie O to sleep on the sofa. 😂🙈

Like the hubs says, it's nice to see them so comfortable with each other.