Yesterday, after a day filled with activities, I was sitting in bed with her whìle the hubs prepared dinner.

👶: Later nobody play with me, how?

I kinda lost the mojo to write because I've been so tired and so out of breath.

The little boss has been mostly a sweetheart but she has been waking up at 530am for 2 days in a row now.

Yesterday she didn't go back to sleep after drinking milk. Tossed and turned and the moment it turned slightly brighter she sat up and said, "It's morning time!" and zoomed out of the room to announce it to everyone.

I feel thankful that she was nice enough to stay in bed doing nothing for 1.5 hours.

She did the same this morning. 530am. The only difference is that after some tossing and turning she fell asleep again.

And is still sleeping now.

Which explains why I'm here Dayre-ing at 753am in the morning.

Probably the reason why she couldn't go back to sleep yesterday.

She was so excited about her playdate with Ruth Meimei at the 'big playground'!

That's the thing about sharing plans with her in advance. On one hand trying to make her feel respected and involved. On the other hand it might make her too excited to do anything else. 😂😆 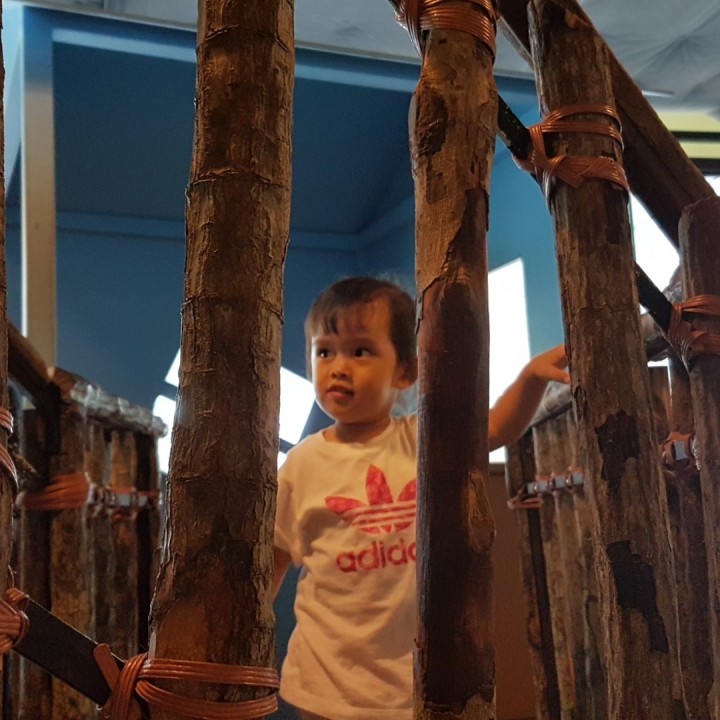 We forgot to take pictures together!

But she was running around like it was her house? She didn't need us to follow her closely, as long as one of us was within her slight.

This is quite a change from just a few weeks ago, where she made Daddy stand right beside her to watch her play.

Too big for the house. 😂

The place was air-conditioned, but she was in sweat at the end of the 2 hours.

That was how much she ran and played.

It's a nice place for kids, toddlers and crawlers! And parents too, because there is a cafe and sitting areas.

Thank you for the reco @Simiwako !

We had ramen for lunch!

Forgot the name of the restaurant but kids dine for free.

She finished the egg with gusto.

I'm hopeless at peeling eggs so the hubs said she technically only ate half an egg.

She'd requested to go to Wai-po's place after lunch but we had the option of going back to the playground since re-entry is unlimited.

Decided to 'test' her because she kept telling us she wanted to come back to the playground again next time.

We asked her if she wanted to go back to the playground or leave to go to Wai-po's place.

And she picked Wai-po's place!

Dozed off as she drove out of the carpark. 😂

She woke up when we reached but managed to take an almost 3-hour nap after drinking some milk.

She went diaperless through her nap and all the way home because we removed her diaper only to realised there wasn't a spare one in the bag.

I thought there was because there's always at least 2 in the bag but somehow there wasn't any.

I was packing her bag yesterday with change of clothes, handkerchiefs, milk, snacks, water, wipes.. and I felt breathless standing up.

So I quickly finished up and went to lie down for a while.

Decided not to be too hard on myself when the hubs and my mum asked me, why never pack why?

I simply said I'm sorry I forgot and made a cloth diaper for her.

Thankfully she didn't pee so no accidents whatsoever.

She was in a chirpy mood!

Went downstairs to get breakfast with us. Had some noodles AND bread for breakfast; both were her own request.

I helped her dig out some booger from her nose, and showed it to her.

She looked at it and said to me:

😂😒😂
Fine, thanks for the encouragement. 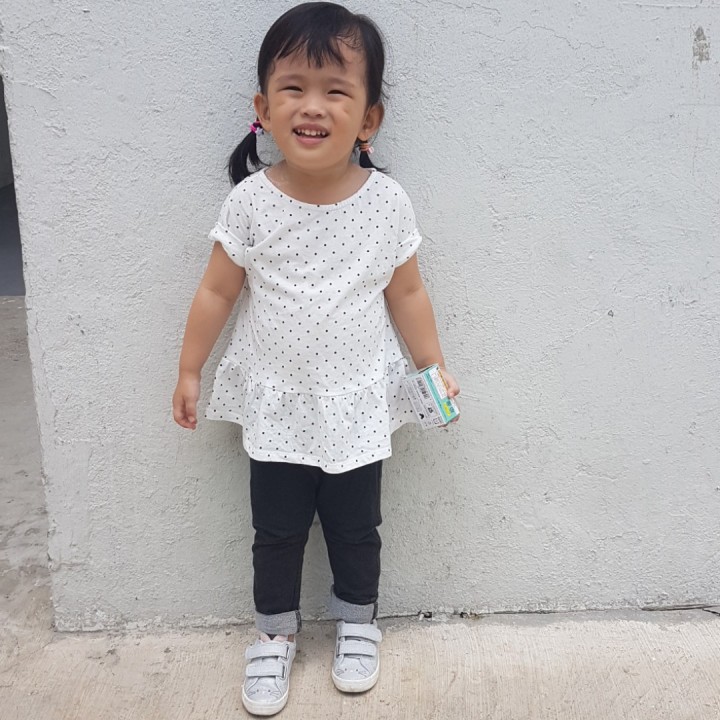 #ootd photo before we drove to Ikea.

She said the sun was too bright.

We have quite a number of stuff to buy, so I did research beforehand to shortlist the options.

Otherwise we might spend the entire day there. No time to browse!

Can't do that with a toddler who wants to lie or sit down on every cute thing she sees.

And husband who woke up this morning with a sore throat.

My back and butt were also giving way so I took the opportunity to sit down whenever I could.

We were done shopping in two hours!

She conveniently took this panda bear toy when we got to the kids section and carried it around like it was already hers.

Her Daddy assumed she was going to put it back at some point because she has so many toys at home.

When we were almost done checking where all the stuff we wanted to buy were located, he told her to leave the panda behind.

Not the tantrums kind but the really sad kind.

I explained to her that Daddy wanted her to leave it behind because she already has a lot of toys at home. Where is she going to put Panda if he comes home with her?

She sniffed and told me sadly, "Put Panda on the sofa?" 😂

I told her then she has to ask Daddy properly and not assume she can bring it home just like that.

She sniffed again and said to me, "Can you help me ask?"

At this point I told her no, she has to ask on her own.

While signalling the hubs to take the panda with him to the trolley.

She thought he was really putting the panda back, got anxious and wanted to start crying again.

But she caught a glimpse of it in the big bag and calmed down to pop the question in a small voice.

"Glad I get to bring you home, Panda." 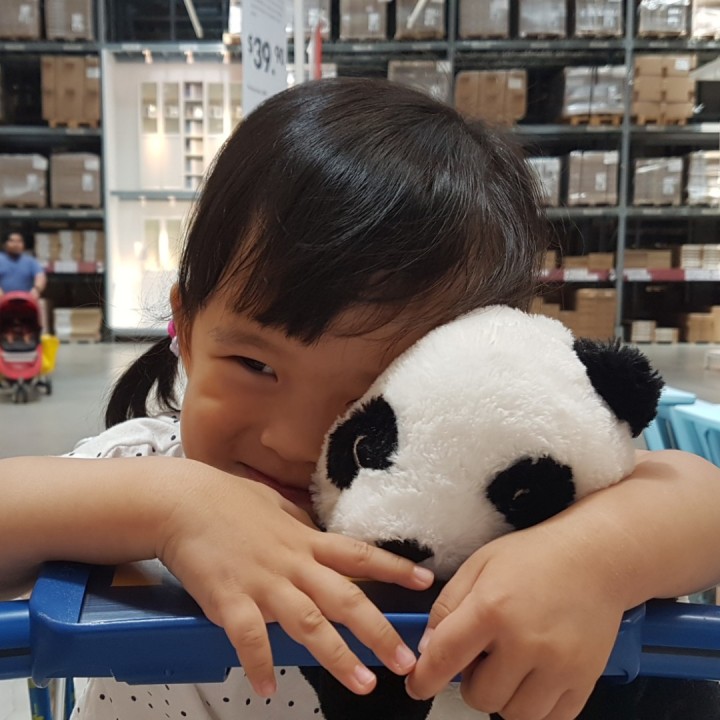 👶: Next time when I'm taller, I'll push Panda in the trolley. Meimei sit behind.

My back, butt and hips were almost gone by now so I sat down on a random day-bed with her in front of me, while the hubs picked up all the stuff from the racks.

Apparently Ikea provides the service to do that, at $15, which is acceptable if you are getting many items.

But the hubs didn't take the offer. 💪💪

We went for the delivery and assembly service though.

No time and energy to put everything together, unlike the first time we got a chest of drawers for Clarissa. The hubs fixed everything.

The furniture added up to be around $350 while delivery and assembly cost about $150. 😅😂

But it's worth it.

Oops she cried in the middle of her nap because I wasn't there beside her.

It took me two minutes to get off my bed to go to her, because I couldn't stand up. 😭

Took me another minute to lie down on the mattress beside her.

I have to be in office tomorrow and Tuesday, and physio's only on Wednesday. 😭😭