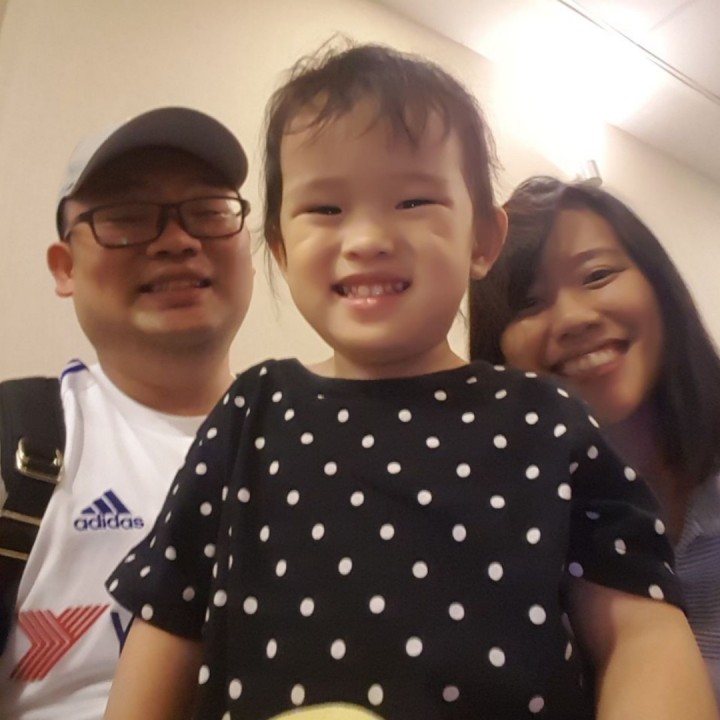 We got bored while waiting to see the doctor.

She insisted on standing in front of us for the picture.

She loves it when we do this!

She'd even give us instructions.

On our way to my parents' place for her #saturdaynap she suddenly turned to look at me and said, "Mummy I make this face for you! Because you are a good girl."

We were an hour behind schedule due to the long wait at the doctor's.

Cut short their naps (both hubs and bubs) and made it to dinner at this Taiwanese hotpot restaurant with @Simiwako.

But the hubs somehow thought that City Square Mall was Changi City Point and we ended up being late for >30 minutes. 😳
So paiseh!

Dinner was good though.

The little boss ate well too! 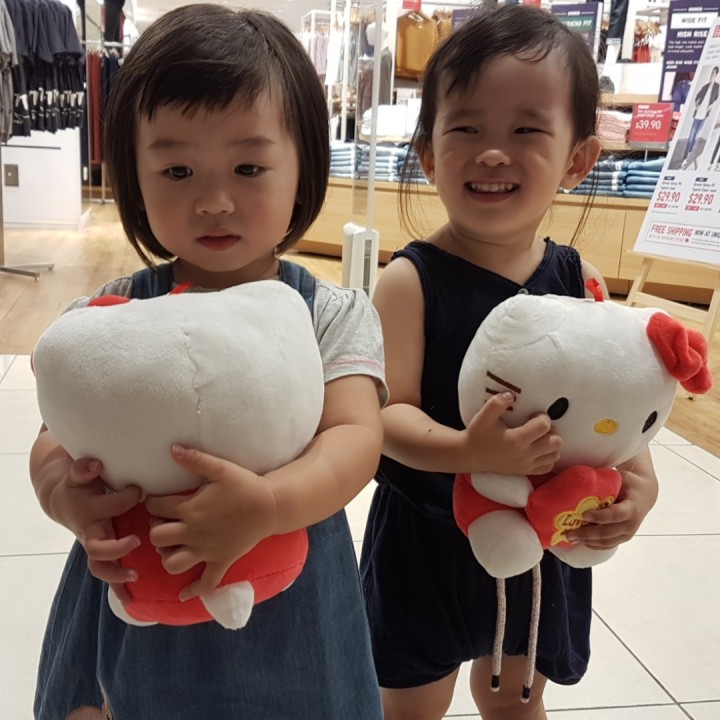 I was wondering why the restaurant entrance was decorated with so many soft toys and we realised why.

Our meal yielded four stamps, which entitled us to, not one, not two but four soft toys.

The two girls chose the same hello kitty soft toy! And another one each for their little sister.

Aww they look so cute together! 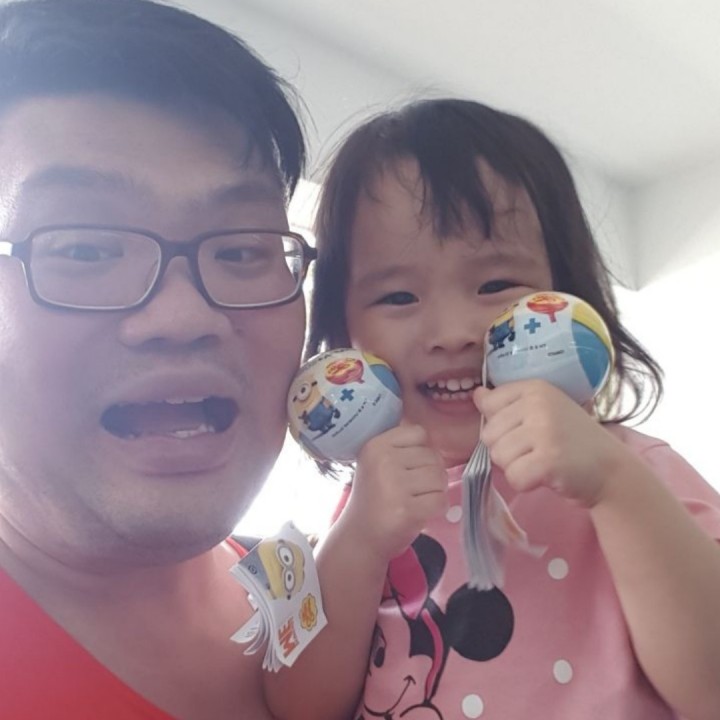 I woke up at 430am and took some time to go back to sleep.

Was half asleep when the little boss zoomed into the room.. at 610am.
Drank her milk.. and was wide awake. 😩

So I started the morning with a headache, stomachache and backache.

The hubs took her to his dad's place on his own so I could rest.

And got her two more minion surprise eggs. 😁😁

I managed to take a nap while they were out. Woke up feeling better, the throbbing headache reduced to a dull one.

Had lunch and popped a panadol.

Joined them for swimming!

The little one was sleeping in her car seat when I got in, one hand holding on to her new minion friend. 😄

We headed to my parents' place again after swimming because my mom made bird's nest soup and bought some groceries for us.

My sisters were out for a late lunch so it was only us.. and the little boss spotted something on the coffee table.

Her eyes literally lit up and she asked me, incredulously, "Is this supposed to be here?"

Well, I was equally surprised.
Are you supposed to know what "supposed to" means? 😂

She'd left the two eggs Daddy got for her earlier today in the car.
So I guess she meant that the eggs were "supposed to" be in the car.

I took this picture of her asking me "Shall we open it?" and posted it on our family group chat to ask her Yi-yis.

Ah-ah bought it for her!

So we told her she should wait for Ah-ah to be back and check with Ah-ah instead.

She really waited and when she saw her Ah-ah, she said, "Ah-ah I'm a good girl! Shall we open it?"

No nap today but we just chilled.

Had roti prata and iced teh tarik my sis and her bf bought for us while the little one played with her aunties.

It's funny how she's so shy around her Si-yi and Gor-gor when she was talking up a storm to her Da-yi about her swimming lesson. 😂

But she asks about Si-yi and Gor-gor a lot when we are on our own.

Nuah-ed on my parents' bed and I was playing a fool with her, pretending to give her a big kiss.

And went ahead to plant 3 solid kisses on my lips and each side of my cheeks.

Complete with the nice lip-smacking sound.

And Daddy went to the gym to train his hamstring muscles. 😂

Hahahaha she somehow invented this and made her Daddy do it over and over again.

Before driving home, the hubs stopped to wash some bird poop off his car, and the bubs asked lots of questions.

👶: Why the bird poop on the window huh?

👧: Because it's not wearing a diaper and it cannot go to toilet. So the bird pooped on the window.

Lol her collection of Minion friends.

One more hour to Monday. 😩😬