I try not to talk about politics, but I guess this isn't really politics but a very high profile family feud.

It is harsh and uncalled for, to do this to your sibling.

Since the two of them own the property and the right to decide what to do with it, there really is no need to go public like this, especially when the brother in question is the leader of the country.

That's putting your self conviction way ahead of the interest of the nation, which your father, OUR founding father, worked so hard to build.

And to do it by throwing shade on the integrity of a leader of the country, that's very, very low.

I wonder if they've thought about the impact to Singapore, and to the rest of the world, with the tonality and words they chose, and the way they chose to share it, before they did this.

The house is, but a house. His legacy lives on, regardless.

So demolish it, do whatever you want with it.

What a sad day for Singapore.

I had plans to meet up with my university friends for dinner tonight, because one of them is back in Singapore this week.

Since I have such an early start this morning, I decided to work from home. The hubs has basketball tonight, so I toyed with the idea of bringing the little boss along to my dinner date.

Asked my friends and they were like "come, come!"

Asked the little boss and she was like, "Yes, yes!"

So yeah I decided to bring her along. 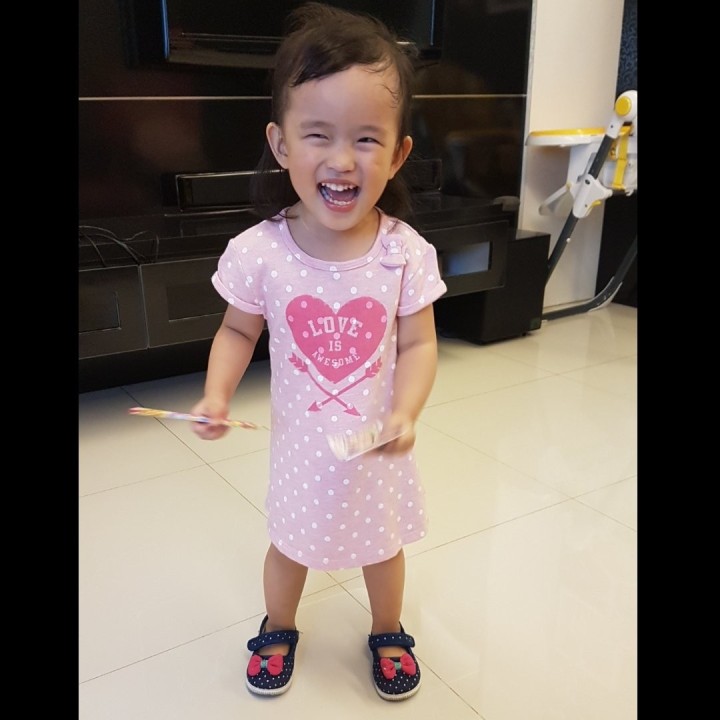 Put her in a nice dress (she picked this dress some time back and we bought it) and asked her to pose for a picture.

I was going for the demure look but she had other ideas. 😂

Anyway she was so cooperative today after she came back from school!

She voluntarily asked our helper to take a shower for her, and she finished her dinner in record speed.

I worked all the way to 630pm, showered and changed, and we got there on time. ✌

She talked so much today I'm now trying to recall and record it down on Dayre.

I'd briefed her on tonight, including what we'd be doing and who she'd be meeting.

I wanted to comb her hair for her, but she was (deliberately) lying down on the mattress.

👧: Clarissa, can you let Mummy finish my work? If not Mummy cannot go out with you to meet my friends.

So she really left the study room to play with our helper so I could finish up my work.

We left the house and she said byebye to our helper.

👧: Why must you say byebye to Mr Lizard?

👶: Because he is in the house with Yaya!

👧: Oh dear what if Yaya is scared of the lizard? Do you want to stay at home with her?

👶: (Contemplated for a bit) No, Mr Lizard will protect Yaya!

We took a cab, and when the cab arrived she asked me, "Is this our car?"

I said yes, and opened the door for her.

She basically talked up a storm in the cab.

At one point she was asking me about every landmark the cab drove past.

👶: Is this a playground?

At another point she was singing very loudly.

泥娃娃 was the song. The lyrics was about how this doll has no daddy or mummy.

👶: Mummy, why 泥娃娃 got no Daddy and Mummy?

👧: You know the princess (her barbie doll) at home? She has no Daddy and Mummy right? Because she is also a doll.

👶: (Happily) But Clarissa has Daddy, Mummy and Yaya!

She also talked about school.

Used words like "suddenly", "the two of them" and counting her friends one by one – "Oh I count K already". 😂

hahahaha and she was also asking Daddy to make all sorts of different faces via WhatsApp.

One of the requests was, "Ask Daddy make shy face!"

Hehe and here we are.

As expected she was very shy and didn't say hello properly.

We arrived just minutes before my friends did, and she was still asking me, "So where is Auntie T huh?" 😂

But after they all arrived she was all quiet and shy.

She ate from her empty bowl (as usual) but when the real food came she had noodles and soup!

She finally warmed up.. less than 30 minutes before we were about to go home. 😂😅

Started singing and trying to get our attention.

She took a nice wefie with us, high-fived one of my friends and then decided she was too shy to say byebye properly. 😒

But she was quite well behaved and I could actually catch up with my friends properly. 😁

Talked up a storm again in the cab on our way home, until the cab driver asked me, "How old is she?"

When he coughed, she asked me, a little too loudly, "Why is uncle coughing huh?" 😂

And he was nice enough to tell her it's because of the weather lol.

We got home, got changed, and she was fast asleep immediately after finishing her milk. 😊