Yesterday evening, I was resting in bed while watching the hubs and the sis get busy with Clarissa's homework (i.e. making vehicles out of recycled materials) and the little one zooming in and out of the room looking equally busy.

Out of the blue she walked into the room and handed this to me. 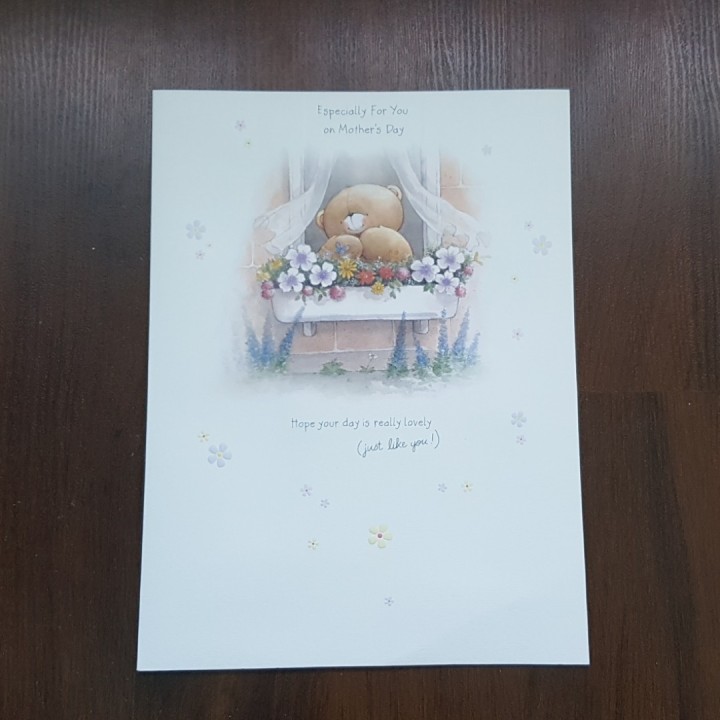 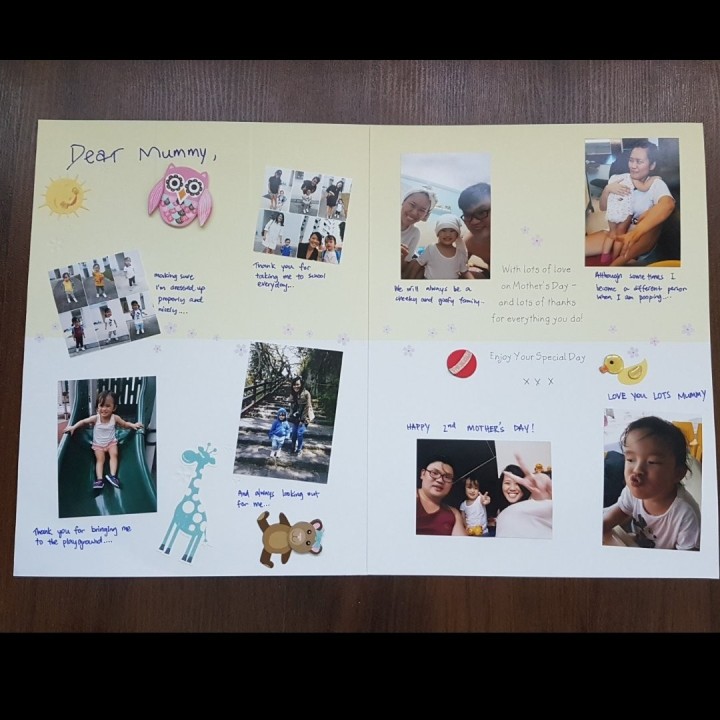 Text and picture by the hubs, random stickers by the bubs. 😍😘

Hehe so sweet I teared reading it.

Officially my first mother's day present from the hubs and the bubs!

Close-up of the card made by the little boss in school.

My mum asked her, "Wah who made this card?

She said, "My teachers."

I'm sure she helped with it. 😅

And when my mum asked her what was written on the card, she told her shyly, "I love you!"

So her teachers meant it when they told me they wrote what the kids asked them to. 😁 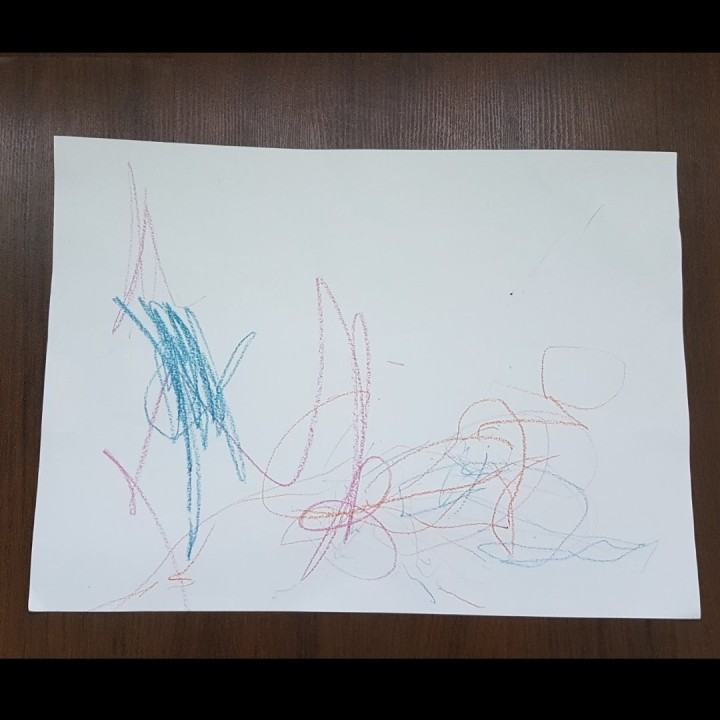 The masterpiece from the bottom of her heart, the one she voluntarily wanted to draw for mummy. 😄

I keep staring at it and I think she was trying to draw a rabbit, lol.

We were at my in-laws for Mother's Day celebration.

As with every year, the hubs' aunties and cousins would bring food over and gather to spend time with his grandmother.

The little boss had just woken up from her nap in the car and was sleepy on top of being shy.

So we went to the room after greeting everyone and she said she wanted to have her lunch here instead of the living room where she usually eats.

She remained in the high chair even after she finished her lunch. 😂

She was content just sitting there watching me eat / trying to feed me / playing with her surprise egg.

Whenever I asked if she'd like to get out of the chair, she'd decline politely.

I asked her why, and she said:

I don't want to go outside. Too many people.

Indeed there were more people than usual, and all of them, ok most of them, were very loud. 😂🤣

I've grown used to it after so many years; it's their way of communicating and it's really just a different kind of family warmth to me.

My mum's very loud too, so I get it. The only difference is that my mum's boisterousness is balanced out by my dad's silence in general. And while there are five of us kids, all girls, at home, we are all pretty quiet.

It's not that we don't talk; we do chitchat but we are much softer. 😂

So when I first joined his family gathering, I felt like everyone was shouting at one another. 😂😂

Anyway, my point is, I get where the little one is coming from.
And it's good that she can vocalize her discomfort. In the past, she'd simply cry and cling onto me.

Not everyone is born to be a social butterfly, so I'll let her be. As long as she greets her elders and knows her manners. 😊

(I couldn't continue writing because, mummy duties. How apt.)

So the truth is, today's like any other day.
Regular programming.

We skipped swimming today because she seemed to be developing a cough and flu.

Came home from the in-laws' and she didn't want to nap.

Which was fine, except that she wanted to poop.

We tried to be casual and nonchalant about it, but she got more and more agitated.

In the end it became a full blown poop drama with non-stop screaming and crying.

Which lasted for more than an hour.

(And yes I paused writing again because the little one coughed while sleeping and threw up all over herself and her bed.)

Back to the poop sob story.

It's been extremely distressing and quite depressing.
It used to be once every few days, once a day and now it's at least a few times a day.
On a good day she'd simply whine and be done with it.
On a bad day she cries nonstop a few times in a night, and nowadays it also happens in the mornings.

We brought her to the PD yesterday and the PD said her phobia of pooping is causing her to instinctively stand up straight and even cross her legs when she feels the urge to poop.

That's because she knows if she sits on the potty or squats down, the poop would rush out uncontrollably and it'd be painful for her.

Hence by standing up she is trying to control the speed of her poop coming out.

Of course she usually ends up pushing the poop BACK instead of really controlling the outflow of it.

And then it becomes a vicious cycle because of all the poop that got pushed back and accumulated in her system.

Her tummy always acts up because of the need to purge the poop. She puts up a fight. And it's a zero sum game of wasted sweat and tears.

Most of the time I try to be calm about it. Because I understand her phobia and I understand she's beyond reason.

And shouting at her or sharing your suggestions with her wouldn't help and causes more distress.

But just like I understand her phobia and distress, I also understand why people feel distressed by her crying and feel compelled to help her / scold her / tell her to stop crying.

My mum would be making comments like how she's perfect except when it comes to pooping or dishing out suggestions like carrying her to poop.

The hubs also lost it once and told her she'd have to go to hospital and have doctors take out the poop for her.

My sis couldn't handle it either. Usually after a poop episode she'd be looking all sad and angry I feel bad putting her through this.

It's a good thing we sent the precious helper home, because she'd either be shoving a potty underneath Clarissa's bum or making remarks like how she's going to be three and should use the potty.

So I try my best to remain calm, even when I don't feel calm, I try to appear calm.

I hate to admit this, but it has really gotten to me.

Sometimes I feel like leaving the house. Sometimes I feel tired just thinking about the wiping and washing, cleaning off poop with my bare fingers and picking up poop off the toilet floor.

And I'm not even sure what's caused her constipation to worsen, when there has been no obvious change in diet.

Times like this make me wonder what I have done wrong, why she is suffering and why all these have become so stressful.

Because at the end of the day, it's always the mother's responsibility.

And always the mother's fault.

Why does she not eat fruits? Why does she dislike vegetables? Why is she not toilet trained? Why can't she let you simply remove her pants and diaper when she poops?

I'm not fishing for consolation or compliments, because I think I could have done better with her diet and I'm trying to rectify it.

It's just.. quite depressing to think about this, especially when she's wailing like she's in so much pain.

Today I actually felt like sending her to the hospital.

The PD has given us new meds for her to take, and we'll see her again for a review in two weeks' time.

It looks like a very tough week ahead because on top of the constipation she now has a phlegmy cough and runny nose.

And I'm supposed to go on a business trip next Sunday.

I feel a little bad for the new helper, coming at possibly the worst time. I wonder how she feels about the constant crying, although I try to tell her not to be too bothered by it.

The last thing I need is her packing up and calling it a day.

Because sometimes it really feels like we are back to the newborn days where she cries nonstop and I don't know why. The only difference now is I DO know why, but I don't know how I can help.

So for someone who's just coming into our family, I'd understand if she feels disturbed by all the crying.

I guess the past few months of craziness are really taking a toll on me.

Crazy emo ex helper drama, no helper, nights and days of solo parenting, and on top of that all the work and organizational pressure, and all the poop episodes.

Some days I just can't help but feel sad and breathless.

The hubs had suggested giving me the Saturday off to spend some time on my own and I said I'd think about it. It was a nice suggestion and would really make a good mother's day gift.

But I didn't really know what I could do with myself and how to leave a constipated toddler at home so I said I'd think about it.

It turned out that I didn't have to think, because the day after he made the suggestion he informed me that he had to work on Saturday, and I really wanted to bring the bubs to see the PD.

Sorry for such an uninspiring, even slightly depressing, Mother's day post.

I can only say it's the reality of motherhood.

At the end of the day, lavish gifts or not, elaborate celebrations or not, the most important thing is for the kids to be healthy and happy.