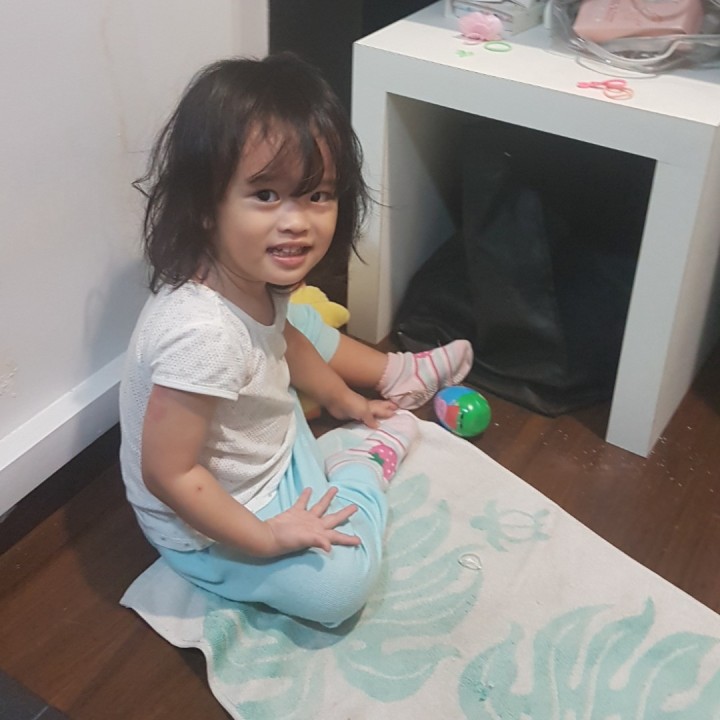 👧: Clarissa, mummy has a tummy ache and needs to go to the toilet. Can you play on your own or sit on Mummy's bed?

👶: No, I want to follow you and wait outside the toilet.

👧: Hmm but I'll have to close the toilet door ok?

👧: But I cannot poop with the door open! 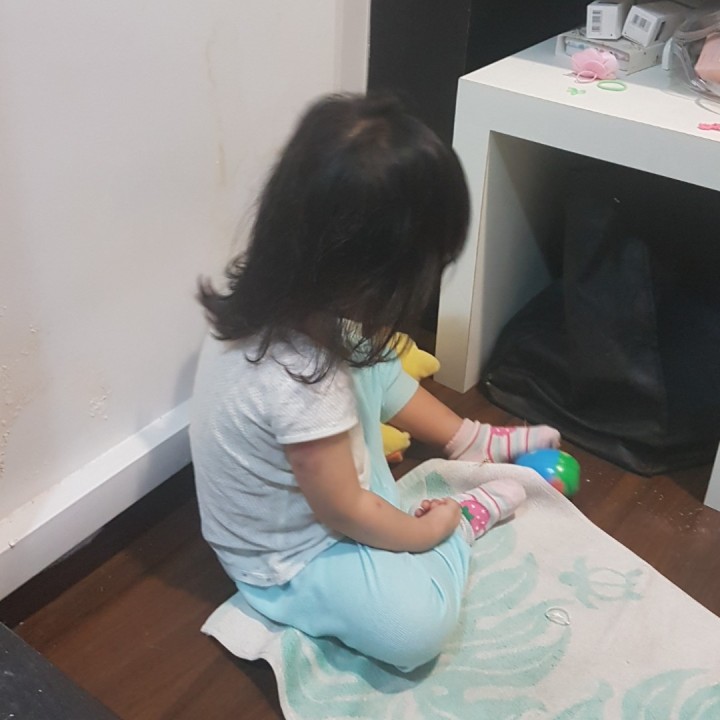 👶: I will turn around and not look. 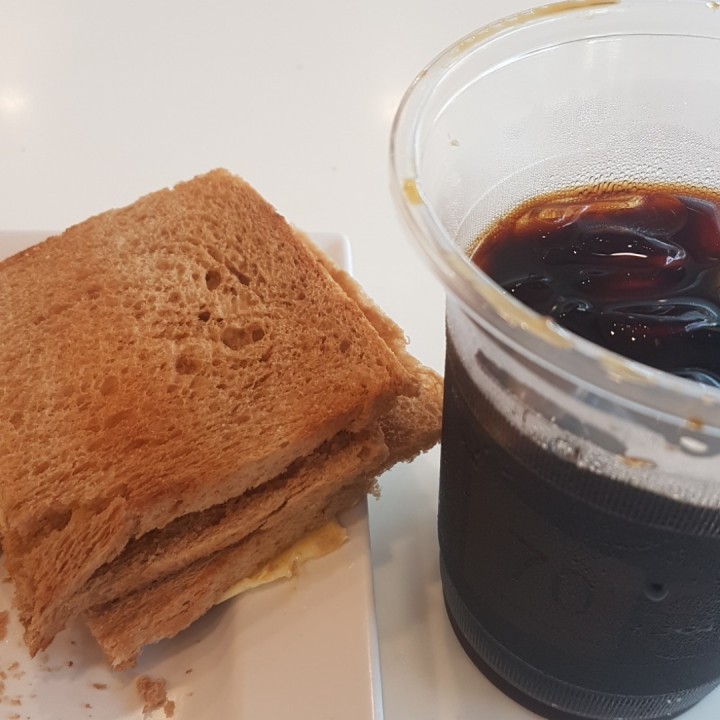 Fuel for the morning.

Ordered the wrong coffee though.

I think I got it right the first time, but the service staff turned away to throw some rubbish and asked me to repeat my order.

So somehow it became kopi-o instead of kopi-si.
At least I got the kosong peng right.
Sigh.

Nearly ordered the wrong toast too.

My brain is clearly not functioning yet.

I didn't sleep well because both Clarissa and I were probably having separate "nightdreams" (Hahaha she made up this word).

I kept waking up and she kept tossing and turning and calling "Mummy!".

Well at least it's Friday! 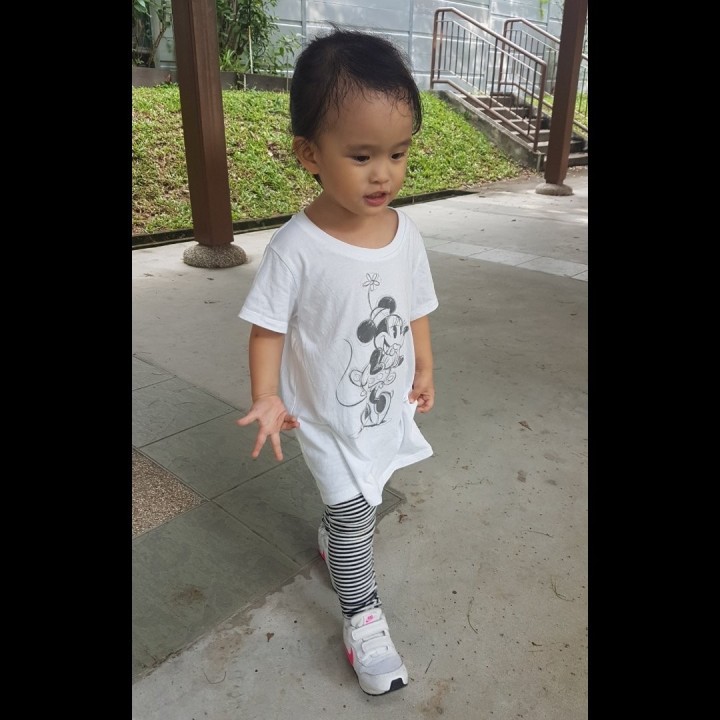 Forgot what she was talking about.

Was trying to take a decent picture of her but she refused to pose properly. 😂 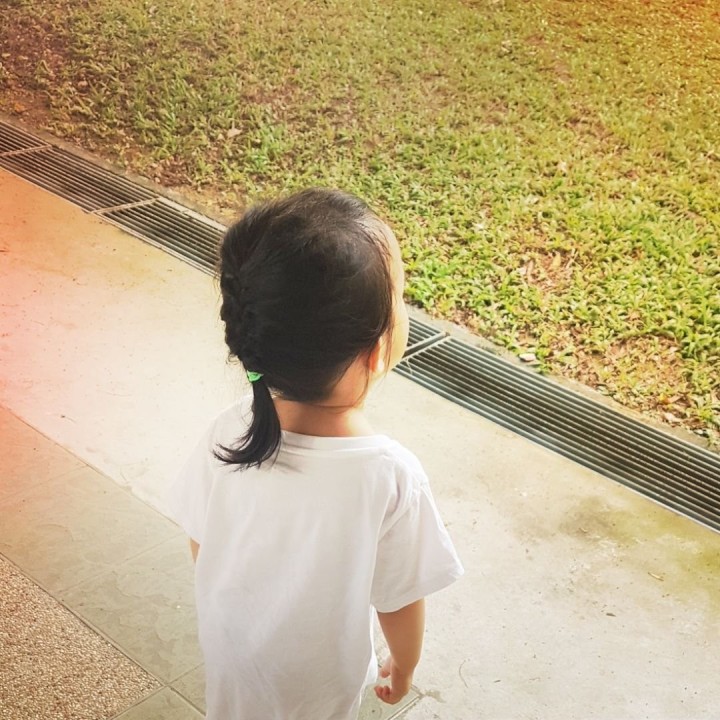 Not very clear from here but her teacher braided her hair so nicely!

I wonder what they do to make her sit still to finish the hairdo. Almost everyday she comes home with a different hairstyle.

While I struggle every morning to tie a ponytail. 😂 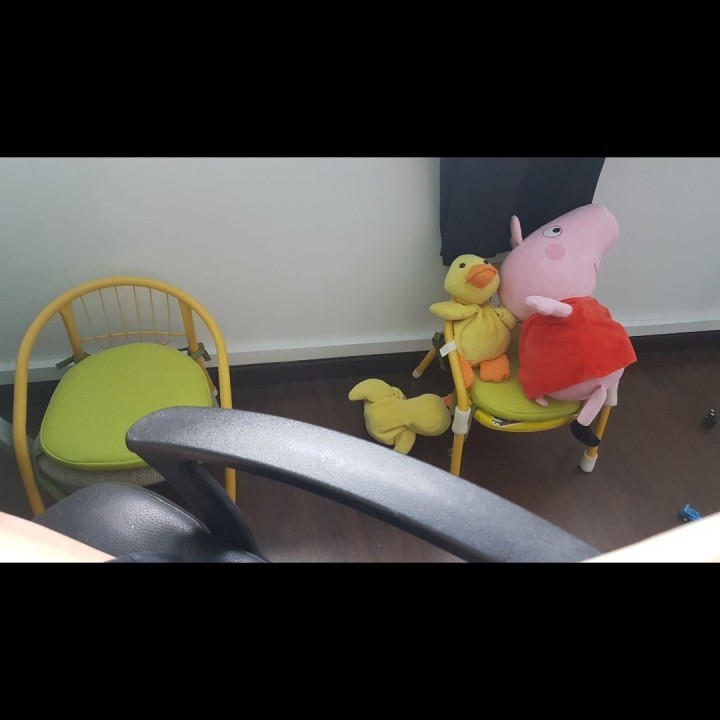 I still had work to do after we got home from school.

So she set up shop next to my chair.

And then she found something to do with Ah-ah.

The next thing I knew, she was putting on her sandals and asking #superbabysitter, "Ah-ah, put on your shoes!"

And off they went to the playground. 😂

👏👏👏
Ah-ah must be wondering how they got to this point. 😂
#worldclassnegotiator at work. She got her way without even negotiating! 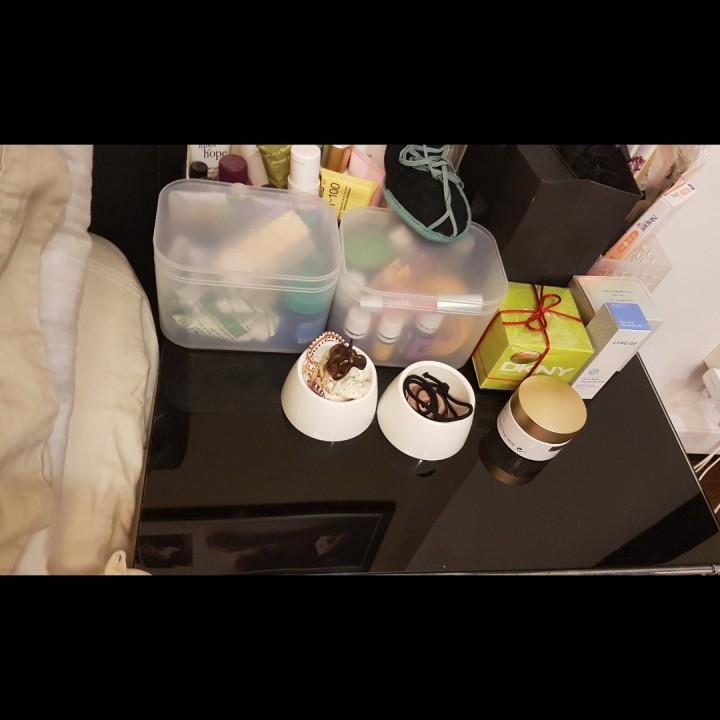 Thankful for the 30 minute relief.

I folded the clothes while my mom cooked dinner.

I wasn't feeling well since after breakfast so it was good to sit down instead of having a toddler climb all over me.

#superbabysitter also went out earlier during the day to get these organizers. We had so many tiny things sitting on the bedside table I haven't seen the surface of the table for weeks.

So she bought these nice boxes to house them.

Hello, surface of the table!

She also got a few to house Clarissa's ever growing collection of surprise eggs and tiny toys.

We always get a surprise from the eggs because we find them where we least expect to, so it's nice to put all the eggs in one basket like this. 😂😁

Seeing the general mess around the house now is like a battle of endurance.
Whoever can't stand it does something about it first. 😂

On a more serious note it's very nice of #superbabysitter lah.

The mess does get to me, but I don't have the mindspace or energy to clean it up.

I was just thinking today that we should get a new laundry basket because the one we have now is really cui, literally breaking apart already.

And tadah! She came back bearing one, together with all the storage organizers. 😘

Sis#3 shared this with me.

This is actually the theme song of a movie – 六弄咖啡馆.

I caught the movie on a flight.

It was one of those stories about young love, similar to 那些年 and 我的少女时代, but with a little twist at the end.

I enjoyed both the predecessors but somehow I wasn't able to get into the storyline for this 3rd movie on a similar theme.

I suspect it was because the male lead was too, erm, short and boyish for me to really care about the story. 😂

But the theme song is nice!