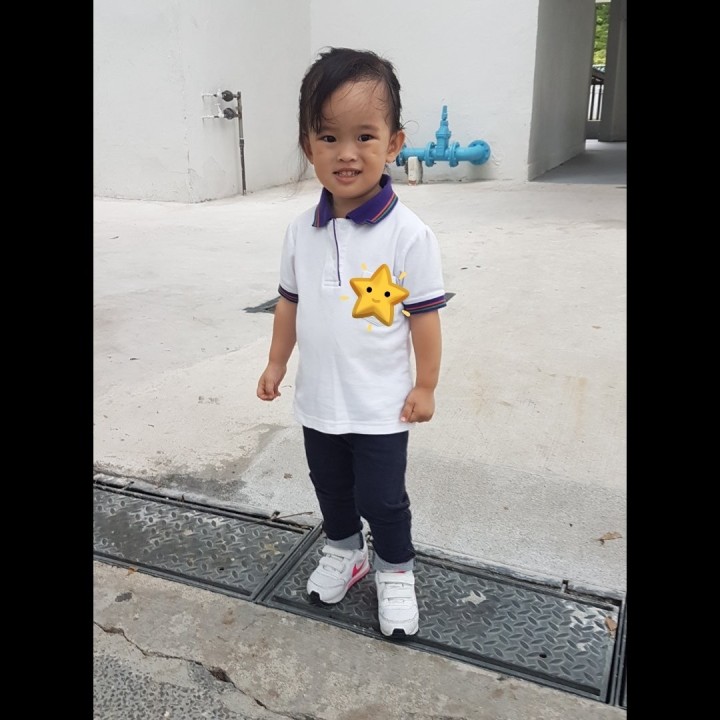 Ooh haven't paused to take pictures of her on school days for a while now.

Pick-up by Ah-ah and Ah-gong.

Apparently Ah-gong came up to use the toilet, saw the less-than-optimum state of our flat and remarked that there really is a difference without a helper. 😞😔

And then the little terror trolled her #superbabysitter for two hours with her crazy pretend play stories which involved pushing the stroller around the house and going downstairs to "go on a holiday".

They just got back from the zoo and holiday when I reached home.

Had dinner with her.

She had chicken rice! *achievement unlocked*
Chicken rice with chicken! Not #鸡饭不要鸡肉谢谢
And stir-fried fish.
And vegetables.

I had to feed her while telling her stories, but she finished almost everything.

While in the shower.

👧: Wow that's good! Who cleaned your bum for you?

👶: (Sheepish smile, like the thought has never crossed her mind) Ehhh.. No leh.

I guess that's why tonight's a little more relaxing than previous nights.

Before packing her school bag.

I'd asked her to bring her school bag into the room so we can unpack and then prepare for tomorrow.

She dutifully ran out to the living room to get her bag, and tried to drag it on the floor.

Lights out.
She was lying down in her cot while I was on the mattress beside her.

We were kinda chit-chatting.

👧: Clarissa, do you love Mummy?

👶: I love everybody. That's why everyone loves me.

I guess she got the "everyone loves me" from the photo/story book her Ah-ah made for her.

It's one of the lines in the book and she likes to make us read the book to her.

Still, it is quite amazing that she connects it on her own and thinks it's because she loves everybody.