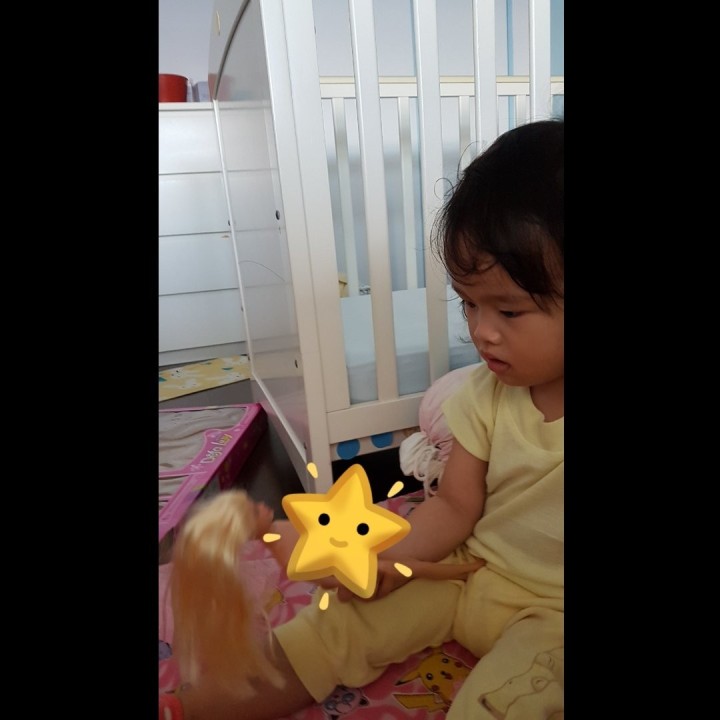 At 7am this morning.

She decided that the Princess needed a change of clothes.

But halfway through changing she held the Princess in front of her and started talking to her.

👶: Can you change on your own?

👶: You must change on your own ah. You see the kangaroo? She change on her own.

👶: You cannot like that huh. Cannot throw tantrums. Ok?

Last night she was combing the Princess' hair.

She's repeating the things we tell her to a defenceless Princess.

I don't know where the kangaroo part came from though.

Oh and when my sister laughed at her comment 👆 she turned to her and said, very solemnly, "Hey don't laugh at me huh."

After dressing the Princess, she decided to take Mama duck for a drive.

She buckled herself and mama duck up, but papa duck asked to sit in the car too.

She said ok, papa duck can sit beside mama duck.

And then Bui bui duck asked to get on too.

She said, "No space for Bui bui" so he couldn't get onto the car.

Baby duck came along and she said ok, baby duck can sit beside papa duck.

Soon she was bundling the ducks up in one hand while trying to drive.

She turned to me and exclaimed:

And decided to put baby duck on the dashboard instead before she happily drove off.

PS: I played no part at all in this mini drama serial. I merely watched on as she played herself and the various ducks. 😂

We brought her swimming, as usual, at the same time slot.

But instead of the usual toddler swimming program, her coach has promoted her to the swimming class meant for kids 3 years and above.

He told the hubs since last term that she is ready for it, even though she doesn't meet the age requirement.

Her classmates were all older than her, mostly 3s and 4s.

They all got "promoted" together so it's great for her to see the same familiar faces.

The biggest difference between the toddler program and the new module is that parents do not accompany the kids into the pool at all.

The kids walk up on their own and sit beside the pool to wait for instructions.

And then they take turns to swim in the water under the guidance of the coach.

This term started two weeks ago, which meant we missed the first two lessons since we were on vacation.

So the hubs walked her up to the pool instead. She didn't want to go up on her own.

The kids took turns to get into the water, and our little boss did too.

And then the hubs started walking away, watching her from the stairs.

She was still following the coach's instructions and going through the activities, but she kept looking in Daddy's directions, her lips turning into a frown and she looked like she was about to cry. 😢

But she held it in and continued going through the lesson.

We eventually left the pool area and sat outside to watch the CCTV.

So brave, she basically just jumped into the water and swam.

The distance was probably just a metre but I'm so proud of her.

I remember my very own first swimming lesson when I was nine years old.. and I clung onto the ledge the entire time. 😂😳

She was in a very happy mood after the lesson.

"Just now I cry!" She told us. "But I do monkey monkey!" ("Monkey monkey" is where they learn to hold on to the ledge with their hands and move sideways)

I think this was pretty much us last week though the real deal probably starts this week since we were on leave half of last week.

Clarissa's sudden fever on Friday threw us off course. I felt bad about taking urgent leave on a day full of meetings and just after coming back from a holiday. But it wasn't even a "choice"; it was a no-brainer what I had to do.

It was tough taking care of her on my own the entire day.

Her fever went as high as 39.3°C and never quite went down despite the meds.

She wasn't in the best mood and refused to eat, and I wasn't feeling so good myself either.

By 6pm when she eventually took a nap, I had a massive headache but dragged myself up to cook some fish and corn porridge for her.

She obediently ate 2/3s of the porridge so we could give her another round of meds.

By then the hubs was back and my family came over so it was a relief.

We gave her ibuprofen instead of paraceutamol, hoping it would finally break her fever.

It seemed to work.

My FIL called and told us to roll a hard boiled egg around her body to get rid of the heat.

She got better and better as the night progressed. Her face wasn't as flushed and she was playing with her aunties happily, albeit quieter than usual.

We had a nice birthday celebration for Da-yi and the little boss went to sleep shortly after.

Her fever broke and she was ok in the morning.

My FIL called to check and I heard the hubs trying to tell him it was probably because we changed the medicine.

He asked me again today, insisting that the egg must have worked to remove the heat from her body. I tried to tell him about the meds but he said the egg was effective. So I said yes yes it is. 😅

Whatever it is, I just hope she is ok! 😉

Fever aside, it has been really hectic and tiring doing double duty.

Everything's a little messier than before (even Clarissa's hair 😂) and we are more tired than usual, but I think we can get through this.

Even Clarissa chips in to help. She'd sit down with me to fold the laundry together, which is basically just her rolling the laundry up like a ball and handing over to me with a proud and confident "Nah!" 😅, but it's so sweet.
She'd even keep the laundry for me.

When she sees me lying down while playing with her, she'd bend down and ask me, "Is Mummy's back painful?"

I'd tell her truthfully that yes, Mummy's back is painful so sorry I need to lie down.

That's when she'd run off to ask Daddy to play with her instead. 😂😂

She asked about Yaya about once a day for a few days.

I explained to her that Yaya has gone back to the Philippines.

She asked why, so I said she has to go back because she's not feeling well.

She asked why again, and I said because she's tired and needs to rest so she can't work any more.

She responded with a knowing "orrrhhh" and seemed satisfied when I reminded her, "you said goodbye to her, remember?"

She said yes, and she has stopped asking about Yaya since.

The helper, on the other hand, has been messaging me asking me how we are and telling me she misses Clarissa.

I didn't respond, because it's really time to move on.

I don't think my last chat with her would have worked in changing her attitude, if it hadn't ended with me sending her home.

It was a case of too little, too late. Maybe her regret is real, but she wouldn't have realised her mistake if we'd let her stay on.

I hope she finds peace and a better employer soon.

For two nights in a row now.

Last night we managed to make her eat half of the small bowl of porridge.

Tonight she barely ate three spoonfuls of the fried rice and it ended with tantrums and lots of tears.

She told me her cheeks hurt and kept screaming and crying.

Gave her a shower after she calmed down.

Later on I tried to talk to her about what happened, and asked her why she didn't eat her dinner.

But promised she would not do it again.

Sigh I hope it's just for this weekend.

Eating has never been her forte but it really shouldn't be such a struggle.

We talked about going to school tomorrow so I started mentioning names of her classmates, telling her she could play with them.

She stopped me when I mentioned her classmate YF.

👧: Oh dear what happened? Why did YF hit you?

👧: Ok, if anyone hits you, you must tell the teacher ok?

We went on to talk about school and her other classmates.

I tried to ask about other classmates just to check if she'd say the same thing.

👶: R cry because she wants Daddy and Mummy.

She went on to tell me about another classmate, D.

Again I told her she should tell her teacher about it, and tell her friends not to do it again.

(While Daddy at the sidelines tried to tell her to hit back and win 😒🙊.)

I guess she's probably speaking the truth, though I'm not sure about the seriousness of it.

I'm not planning to make a big fuss about it, since it's probably kids play and some kids play rough.

I'll probably mention it to her teachers if I see them, and ensure Clarissa informs them or asks for help if she really gets bullied by her classmates.

Boy, sometimes I really forget she's barely 2 and a half years old.. And yet already have so much to grapple with.