So the past 3 days have been extremely trying because the little one has been trying to poop.

It's funny how she doesn't have the urge during the day, but saves it all for me when I'm back in the evening.

I can't remember what happened on Tuesday night but there was some crying and a little poop.

Last night was worse than the night before, because she was crying almost throughout the night, even after she fell asleep.

(No, she didn't have durian but I can't find a more appropriate sticker.)

As I was in the cab on my way home, my sister called me to check what time I'd reach home.

The little one had asked to have dinner together with Daddy and Mummy. But I was stuck in a traffic jam and wouldn't be back until 7pm.

Luckily my sister managed to persuade her to start eating first.

I was pre-warned about her crankiness.

When I got home she started telling me about her day and I sat down to have my dinner.

I think she started experiencing discomfort while I was halfway through my dinner.

And then it started.

Her face started cringing and soon she was in tears. She was in a lot of pain, and was trying all her might to poop.

But she was standing up, her butt squeezed tight together and pushing. She was literally wailing, her little face red from pain and anguish, and mixed with sweat, tears and mucus.

In her first attempt, something came out but it was small so she definitely wasn't done.

As I tried to give her a quick wipe before giving her a shower, I realised she had poop stuck in her you-know-where.

So I helped her pull it out, bit by bit, while she cried and cried.

She was very chirpy when I washed her up though, even squatting down to let me wash her bum-bum properly .

We've been trying to tell her to either use the potty or at least squat down when she wants to poop.

She listens and seems to agree to do it but when the wave of poop comes, she forgets all about it and simply squeezes her butt together while trying to push the poop out.

We've asked her PD about it before, and she said it's because she's developed a phobia and is associating poop with pain. 😢

The only way to overcome it is to soften her poop so it becomes less painful for her.

Anyway less than 5 minutes after I showered and changed her, the crying started again.

A lot of wailing and tears later, a bit of poop came out.

👧: It's ok Clarissa, you just try your best.

😂😂😂
I honestly wanted to sit down and cry with her.

So anyway, I showered her again and as the story of my life goes, the next wave of tummy ache came very shortly after, while I was in the bathroom taking a shower.

Cue all the wailing, etc, etc, etc.. this time, no poop came out and it was getting late.

I changed her t-shirt and asked her if I could wipe her bum-bum but she was in a highly irritable mood and started crying all over again.

I left it as that (only to find a very tiny poop residing in her diaper when I changed her this morning).

To make matters worse, her leg and hand were swollen again from bites. 😢

Not as serious as last week's bites, but very red and swollen. She wouldn't stop scratching.

She was very exhausted by then and told me tearfully she wanted to talk to Daddy, who was working late. So I called the hubs who was on his way home, and she suddenly decided she didn't want to speak to him anymore.

Another round of crying.

When she finally calmed down, I lay down on her mattress, next to her, and told her stories.
She didn't want to drink her milk at all, but eventually fell asleep.

She woke up crying at around 1am, and I went to make her sleep again.

(Boy, I've written so much already, but I haven't started on #todayre. 😂)

When I got home, she was telling me about how she finished her dinner today and all the good stuff.

She followed me in the study room and said to me, "Mummy, I want to carry you!"

Which meant I had to carry her. 😂

Right after I scooped her up, she suddenly screamed in pain and asked me to put her back onto the floor.

Cue crying and all the works.

This time, even before she tried squeezing, she said to me, "Mummy, I want to wash!"

Anyway it was a false alarm after all the crying.

So I started having my dinner.

And the next wave of tummy ache came.

It was tiny but I cleaned her up and showered her anyway.

Tried to go back to eat, but erm, the next wave came again.

This time I managed to make her stand with her legs apart and lean her body on me.

So, finally the real deal came.

In the midst of her sweat, tears and mucus, she said to me, "Mummy help me! My poop so big!"

So off to the shower again, and this time I let her play with the watering can as a mini reward for her hard work. 😂

As I wrapped her up in her towel after the shower and carried her, she quipped her usual "now Mummy is wet", hugged me close and said to me:

After I change, Mummy eat your dinner ok? After you finish your dinner, I play with you ok?

This, I guess, is my reward.

My less than half eaten dinner, sitting on the dining table for more than an hour and turning cold, did not go unnoticed. 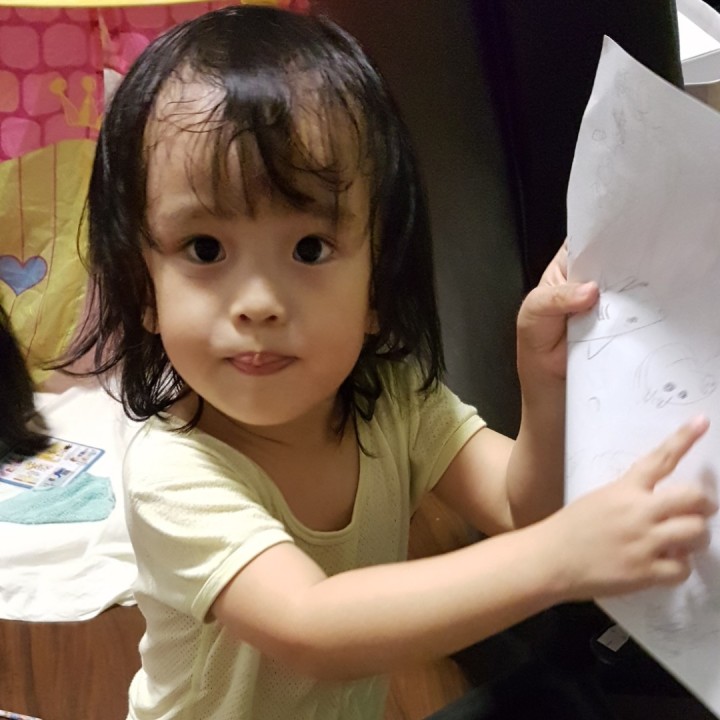 And then she's back to her usual self.

"Ah-ah! Just now I poop so big!" She shared with her Ah-ah, her hands stretched so wide apart you'd think she was describing an elephant or something.

Here she is, showing me the drawings done by Daddy, Ah-ah and her while I was in the shower.

And here we are, finally closing the trying 3-day poop chapter.