It's been a while, ok a few days, since I posted anything.

I have a small pocket of time now, because I took urgent leave at 7am this morning, and the little one's taking a nap.

So this morning, I'd already painted my face and gotten changed.

I went to check on the little one in her room, and found her lying on her mattress, refusing to get changed and refusing to let us turn on the lights.

Took a while to cajole her into changing and taking her vitamins, before we turned on the lights.

And then I saw how swollen her hand was. She'd earlier told me it was painful and I thought it was because of the broken skin due to her scratching.

It was already slightly swollen last night, but I thought it was because of the scratching.

We got home pretty late, around 830pm, and while I was still having my dinner, she'd already asked for her meds and milk.

So we got her wiped down, put some cream on her hand and then I made her sleep.

I didn't think her hand was particularly swollen, and now it is not only swollen on the outside but also the inside. 😢😢

We discussed and contemplated if we should take her to the doctor in the morning or after work in the evening.

Fortunately we decided to drive down to her usual PD to get a queue number and directly see her doctor.

Because it's apparently quite serious and she needs to take antibiotics. 😢😢

She's allergic to insect bites (there are 3 on just one tiny hand) and it got inflamed. The only way to stop it from getting worse is to take antibiotics.

If it gets any worse than this, she'd need to be put on drip. 😢😢

Sigh feel so bad about dismissing the swelling as a normal bite and scratch, and for even entertaining the thought, however tiny, of possibly taking her to the doctor in the evening.

Glad I took the day off (thank you boss) and that she's otherwise ok (just a little cranky). 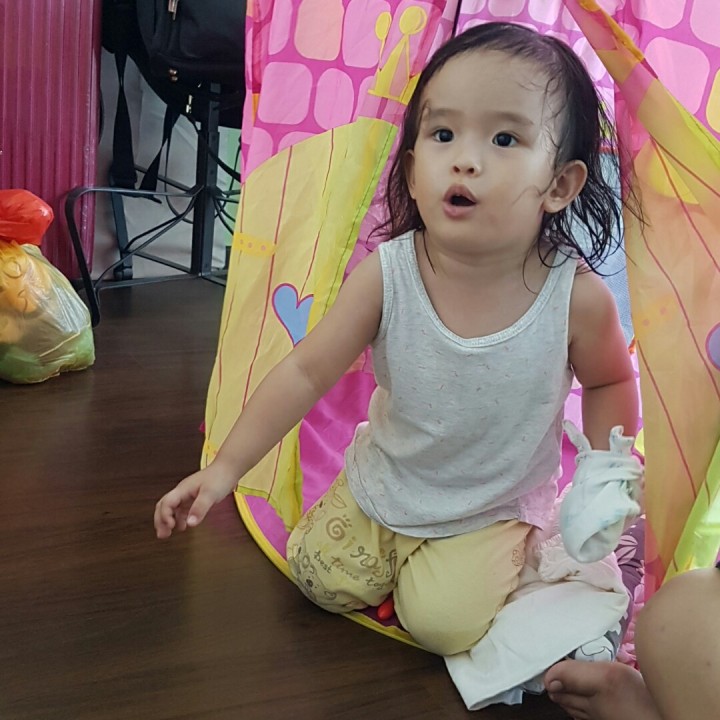 Haha she allowed us to wrap her hand up in a handkerchief, because I told her her hand would become pretty. 😂😂

Using my stock image from earlier this week, taken by my sis. 😅

She's finally taking her second nap for the day, after talking up a storm.

She's been asking me very sweetly to lie down beside her while she drinks her milk.

"Mummy, can you lie down beside me?" She'd ask.

And then she made me tell her two stories, the same ones for both naps today.

She fell asleep quite promptly for the morning nap but talked up a storm before she took the second nap.

She was basically making up stories on her own while I tried my best to pretend to sleep.

She'd poke my eye and ask me, "Mummy why are you sleeping?" 😅

So I came up with a brilliant idea.

"Clarissa, shall we play a game?"

"Let's close our eyes and not talk for 5 minutes!" I tried to make it sound fun.

She immediately closed her eyes, her lashes fluttering.

5 seconds later, she opened her eyes and said to me, "Hey I don't want to play this game!"

So I let her talk, only reminding her from time to time that she should close her eyes and rest.

I dozed off and woke up to her finally asleep, snuggled close to me.

On that note, I discovered recently that she sometimes talks like us.

A few days back, I wanted to help her with her socks but she wanted to do it on her own.

Her tone wasn't bratty or anything, just how I'd say to her sometimes, calm but stern. 😂

Or she'd be making her animal friend go down her man-made slide, and I'd hear her say, very assuringly, to the friend, "Don't worry ok? Mummy will catch you."