I don't know if she pre-planned this but this morning, she requested for this t-shirt without even looking at her drawer.

"I want to wear the Mickey Mouse Oopsie t-shirt!" She said.

And then she told me, "Today no school, today no school. Want go out!" Before zooming around to get us ready to go out…

…to meet the neighbourhood cat, who as usual could not be bothered to even respond. 😅😁

Tried her luck again on our way back.
Offered her surprise egg to the cat.

These days the routine visits to the mini-mart has become more expensive.

This morning, she even picked a few eggs at one go.

👧👦: (Panicking) Clarissa, take one only! ONE ONLY!

👶: (Passes one of the eggs to me) One for Mummy. (Passes an egg to the hubs) One for Daddy. (Holds one close to her chest) One for Clarissa.

We told her we didn't need the eggs so she could have one fit herself.

Thankfully that worked so we bought only one.

Although… the hubs said that technically she's not wrong. 😂😂 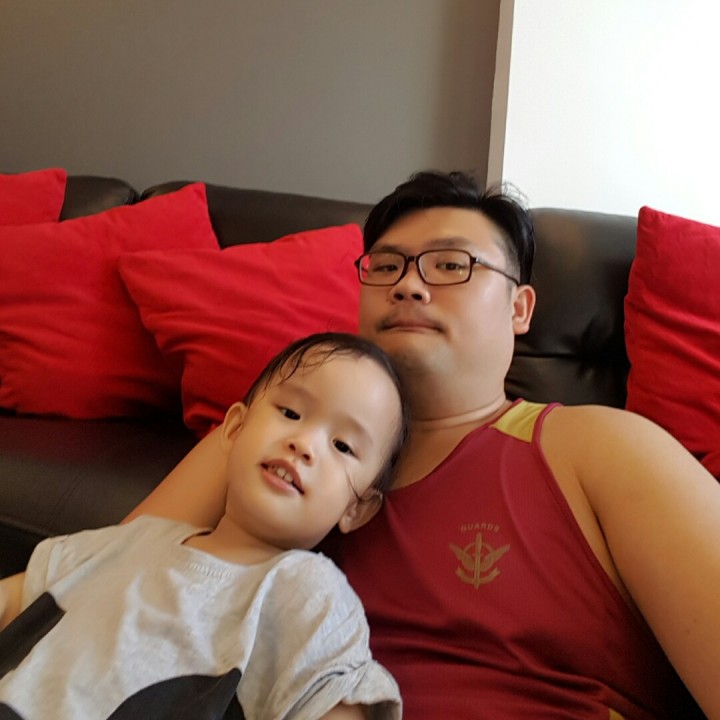 Lying on her human couch while munching bread. 😁😁

(Paiseh, it's a badly taken photo but I only took one! 😂)

This one played with Ah-gong while we worked on the ngoh hiong.

At one point they were eating bread together. 😁😁

Cooking her own new year dish for Ah-gong. 😘😘

Her first hair cut in a salon.

I was holding her hand and she was staring intently at the mirror.
We brought the tablet along but she wasn't even paying attention to it.

She looked super serious and worried throughout the haircut.

😂😂😂
And then she smiled a bit before going back to looking serious. 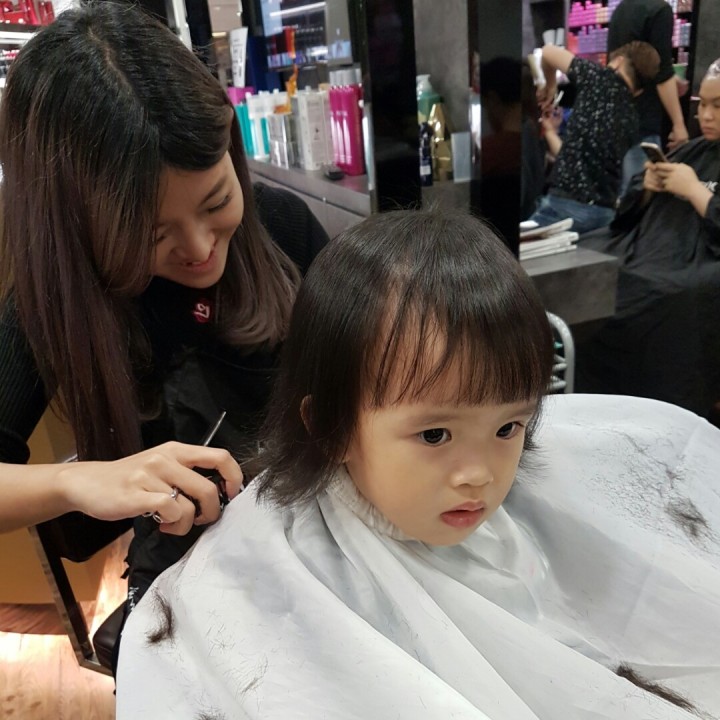 Even the hairdresser jiejie found her amusing.

This girl kept saying "No more, no more" when we were about to finish. Guess she was getting impatient or too worried. 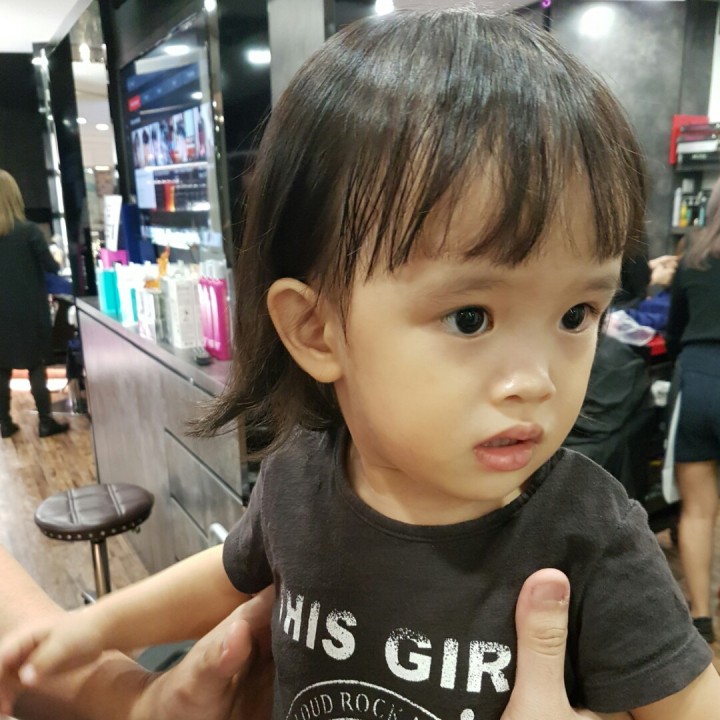 See the contrast between impish and serious? 😂😁 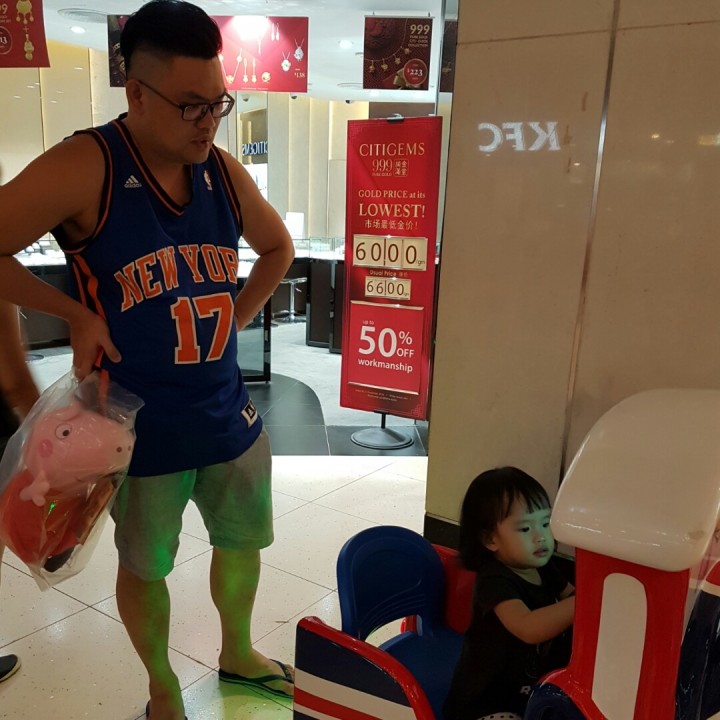 So today's sequence of haircuts is as follows: Daddy, Baby, Yaya, Mummy.

While waiting for my turn, I decided to look for the father and daughter duo..

According to Daddy, he bought it because "she said she wants it!".

Today is also the first time she realised that this car can move.

While Daddy was at the salon, I took her around the mall and let her ride in it.

I was trying to teach her to stand up for herself when other kids wanted to usurp her seat.

👧: Are you done with the car?
👶: No not done!
👧: Then can you tell jiejie you need another five minutes?
👶: (Tried to talk to the two jiejies who were aggressively leaning onto the back of the car) Eh! (Turned to me) Mummy mummy!

Suddenly there was a queue waiting for the car.

#sorrynotsorry but there really is a difference in the way some kids behave.

The two girls (sisters, aged around 5 and 7?) were literally hugging the back of the car and putting their faces right next to Clarissa.

In other words, too close for comfort.
And they didn't bother asking if Clarissa was done.

Just kept shouting for their mum to come quickly because they wanted to take the ride. 😒

And then there were two boys, each standing with their mums, a coin in their hand, watching eagerly but standing slightly away from the car.

Since they are paying (while I was letting her sit in a stationary car) and so polite, I gave up trying to teach her how to stand up for herself and asked her gently to let the gor-gors have their turns first.

So she got off the car reluctantly and watched from the sidelines.. and then realised that the car could actually move.

"I want I want I want," She was chanting nonstop. Even the usual bribery of the phone couldn't distract her.

I took her to a nearby toast box to get drinks and $1 coins. She sat there and had some biscuits but she kept tilting her head to the side to check out the car.

Caught her saying "Aiyo" to the long queue forming behind the car. 😂

Anyway I took her back to the salon for her haircut because Daddy was almost done, and passed the coins to him instead.

They went to get dinner for the little boss first.

My hairstylist says he thinks Clarissa looks exactly like her Daddy. 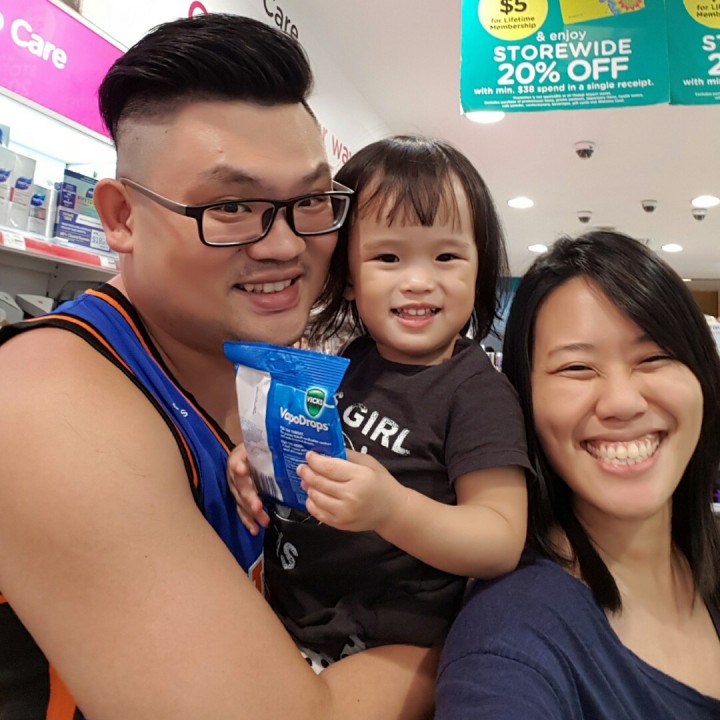