After her shower this morning, Yaya was helping the little boss put on her clothes when she ran out of her room, top half naked, exclaiming:

Hahahahaha I don't even remember she has this top.
It came with the red painter pants her Xiao Gu-gu bought.

She is ok with the pants but has so much disdain for the top lol. 😂 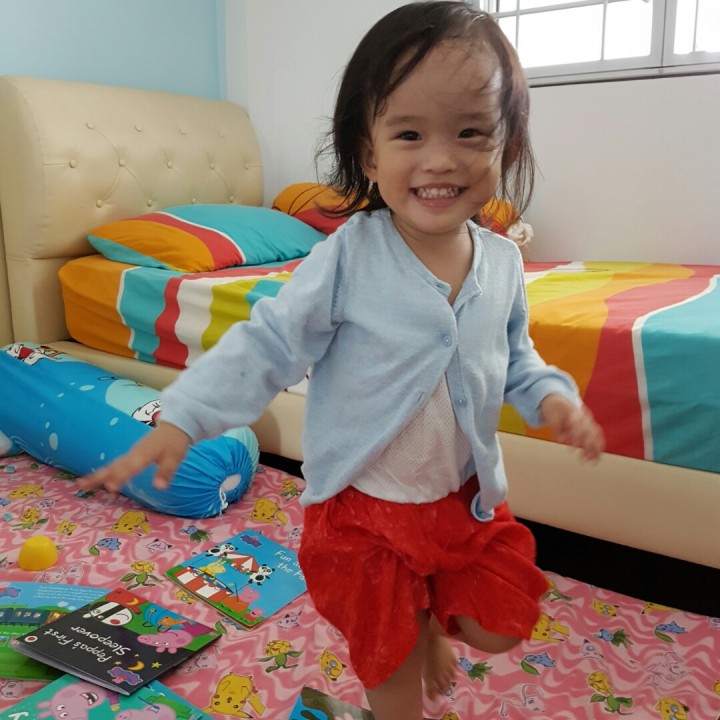 And then she wanted to put on a jacket.
(Anything that looks like an outer wear to her is called a "jacket". Cardigans, sweaters, jackets all mean the same thing to her.)

She even chose the color and insisted that I button up for her.

The weather is quite warm today so I turned on the air-conditioner in her room, because she refused to take it off for her nap. 😒

Wardrobe detox in progress while the little boss takes her nap. 💪💪

I asked our helper to pick out any piece she wants for herself or her kids.

She started talking about going home again and having only a 30kg limit.
I kept saying things like "Anyway you are coming back so you don't need to bring 30kg of stuff".

Sigh the ding-dong-ing is mind-boggling.

The little one woke up from her nap, saw us packing and went to her room to open her cupboard.

Guess she wanted to do wardrobe detox too.

First thing to give away might be the Singapore t-shirt. 😂😂

This one can't wait to go swimming. 😄

Eagerly waiting for class to start.

Such is her love for swimming, she'd ask me to "make story" about "one little girl swimming", everyday.

I'd tell her the story about a little girl named Clarissa who loves swimming but has a runny nose, and that in order not to have a runny nose, she needs to take her vitamins, drink lots of water and have enough rest.

These days we have no trouble giving her vitamins in the morning. In fact she'd be the one asking for it.

Our helper told me that last night she asked her to give her vitamins. 😂😁

On our way here, Daddy tried to tease her.

👦: Clarissa, actually we are not going swimming.

Cannot talk when you drive!

Heading out for dinner!

She saw us wearing caps and said she wanted to wear one too.

This is probably the only hat/cap that still fits her head and erm her dress and hair today. We got her hair in a Korean style bun. 😂😁

Wish us luck tonight.
She kept getting up to talk whenever we thought she was going to sleep.
So no nap.. since 1130am.

She said she wanted to sleep in our room so I brought her to our bed to lie down with us.

But she kept dozing off and waking up to talk.

At one point, the hubs went out of our room and said he'd nap outside instead.
I told her Daddy was upset with her.

She promptly got off the bed and walked towards the door.

I want sayang and kiss Daddy.

She said and went out of the room to look for her Daddy.

We packed fried rice from home for her but she only had a small bowl of it before announcing she had enough.

Sigh she really doesn't eat well when we are out.

The fried rice was delicious!

I know because I finished the rest of it. 😂

Awww one of my favourite pictures for today.

I didn't even realise these two were making the same expression until after I took the photo, so yeah I was the only one who didn't get the memo.

Anyway this was after she trolled me.

She saw Baby M again and said to me, "Mummy carry Baby."

I triple checked with her, "Can Mummy help uncle carry Baby M?"

One of our couple friends was juggling between their toddler and baby and they hardly ate.
I thought I could help to carry the baby so they could at least eat something.

Anyway Clarissa wanted her Daddy to carry her so after checking with her again (she said ok), I went to carry the baby.

She cried and cried.
(Yeah, Clarissa, not the baby.)

So I asked the hubs to let her stand on the chair first so we could exchange.

But she refused to let go.

The hubs thought I did it on purpose and I was like.. do I look THAT bored? 😂😂

He even signaled for me to return the baby to the friend, who was looking so relieved to be eating lol.

In the end another friend took over the baby, which cued lots of crying from his own daughter, whom he said was never bothered with him carrying other kids. 😂😂

So I think our two tables became a crying zone. 😂😂

Luckily they all calmed down and we had little moments of fun talking about ants and flies and bees.

These two were having a conversation.

The little gor-gor was asking me all sorts of questions (like, do you like ants?) and this little meimei would answer them softly (like, yes!) and smile to herself.