She made it so difficult for our helper to give her vitamins this morning so I was giving her a lecture about how she should be nice, etc etc.. and she said to me:

Usually I'd have to try a few times before I get to go into the kitchen to make coffee lor.

But now she wants to sit on my lap. 😂

Wefie with her foot on my desk.

I often wonder how kids drift apart from their parents.. when in their formative years, their first choice for whatever matter or reason is always their parents.

I used to think it's an issue of timing.
Where the child is growing up but the parents haven't caught up.. or sadly, became too tired to even try to catch up.

But.. disappointment.
That's true, too.
It happens.

We often pin our hopes on our children, and just because we give them life and provide for them, we expect them to be good kids, good students, fillial to us, close to us.

By providing for their food, education and even small luxuries like toys and holidays, we think it is right to ask the same back from them, perhaps even more.

But what about the simple promise of trust?
Of protection?
Of being a good role model?

We don't often think about that as parents, do we?

The hubs shared this collage on his Facebook and garnered over 100 likes.

My wish for us, is that we get to take the same picture every Christmas, where she is happy to hold her Daddy's hands, whether she's 2, or 20 or 40 or 60. 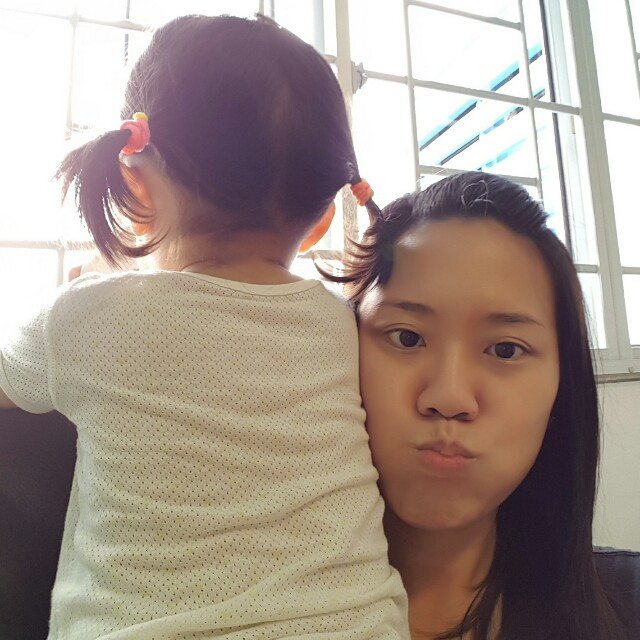 And that we'd be there whenever she needs to show someone a car she's just built or simply to manja.. even if it's every 20 minutes. 😁

So this girl pooped and I decided to give her a quick shower.

After changing her into her clothes, I was about to go back to the study room when she said to us:

True enough, in my hurry to get her changed (I have a call) I forgot about her socks.

Before I could marvel at her use of the word "yet", she demanded: "Mummy wear!", even though she already knows how to put on her socks properly on her own.

"Are you a little baby or a toddler?" I asked her, knowing very well that she knows she's a toddler because she's been telling people that.

She answered without hesitation, and stretched her feet out for me to put on her socks. 😂😁 My FIL dropped by with brunch and said hi to Clarissa, who kept tricking him into believing that she was reaching for him. 😅

Erm someone hijacked my shirt when I was supposed to get changed to go out.

Haha when I told her this morning that I'd be going out later today, she said, "Don't want!"

She actually managed to put her hand through the sleeves!

I asked her, where?

Erm but it's already past lunch time darling.

When I finally got my shirt back from her she said, "Want wear jacket!"

And made me take out a sweater for her to put on.

She ran off to check herself in my dressing table mirror but couldn't see anything so she came to her usual mirror.

I told her I'd take a picture to show Daddy and she posed like this. And she changed her pose to this!

"Okok, continue putting your hand on the door."

For some reason she decided to rest her head on her hand.

Omg I did not teach her to pose like this.

I was running late for my appointment but aiyo she was so funny and cute lah. 😁

I asked her to give me a hug but she ran away from me.

She declared and laughed before running over to give me a big hug.

When I finally got out of the house, she tried to squeeze her cheeks through the gate so I could give her a kiss! 😘😘😘

You know you have not gone for a facial for a long time.. when you tried to lie down on the other side of the bed facing the door. 😂😂

How noob was that?

Anyway I went only because I wanted to finish up the package. 😳

It was so difficult to book an appointment that when they told me today was the only slot available for the month, I took it.. and took leave for it.

Anyway I dozed off in the middle of it and had no idea what she really did to my face. 😂

After facial I took the train to City hall to meet up with two of my bloggie friends and Baby E.

As usual I got lost at the Raffles City basement like a noob. 😂

It was so nice catching up!

Instead of going to sleep, the little one started telling stories to her Yaya.

So the hubs had to intervene by going to her room and asking her to sleep.

But she got reminded of her missing Baby Duck and kept asking her Daddy:

Can you give me a baby duck?

The back story:
This afternoon she asked me to help her take her ducks out of the cot when I realised that Baby Duck was missing.

👧: Really? Baby duck is in school?

So I checked with my helper who confirmed that Baby duck was not in her school bag when she came home on Tuesday.. but she forgot to tell me about it.

I asked Clarissa why she did not bring Baby duck home.. she looked at me innocently and repeated her point about Baby duck on the table in school.

Our helper said she actually heard Clarissa asking the teacher, on their way out, about her Baby duck.. and her Teacher said something about how she can play with the ducks another time. Hence she thought the duck was in her school bag.

But when she got home and unpacked the bag, she realised it was not.

I guess she got too busy dealing with Clarissa's emotional poop sessions that day she forgot about it.

I called up the school to inform them about Clarissa's cold and to ask them to keep the duck safe. 😂

Sigh I hope it's still somewhere in the classroom.

I think her teachers aren't too familiar with her or the students yet. Last week they packed another child's laundry bag into Clarissa's bag. 😞

So anyway our little boss wants to take her baby duck back tomorrow.

Don't think we'll send her to school so maybe Daddy has to pop by. 😅

I told her she either has to check if Baby duck is with her when she goes home or let all her ducks sleep at home while she's in school. 😂

She was probably trying to remind her Teacher that her duck was still in the classroom? But I guess her Teacher didn't understand what she was trying to say.

I nearly started nagging at her for nothing.. luckily Yaya explained. 😅

I love that she's starting to explain things quite clearly now!