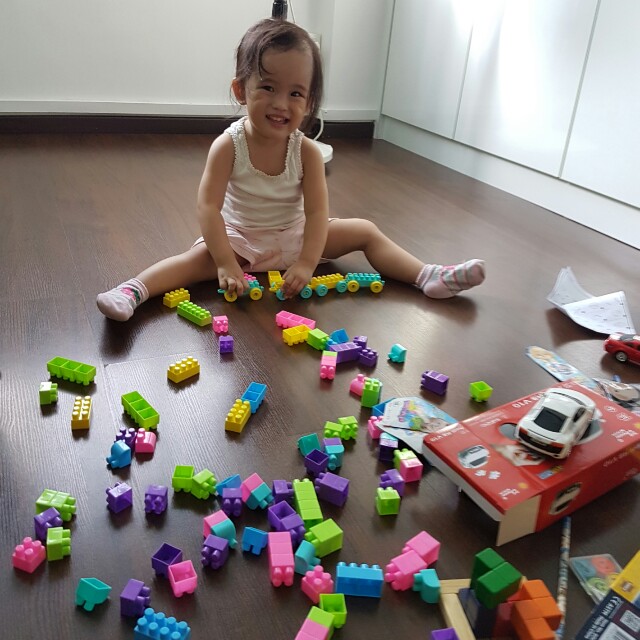 Mummy duties started the minute I got home.. at around 630am.

Because this girl was up since 530am and refused to go back to sleep.

Here she was trying to reach the bricks furthest away from her but couldn't get hold of them.

I so far! I cannot reach!

Oookay. How about the 30 pieces right in front of you? 😂

At one point I told her I was very tired and asked if we could take a nap together.

But a minute later she invited me into her tent and asked me to lie down.

She took a spot beside me and lay down facing me.

"Mummy, wake up wake up!" She poked my eye with her little finger. "Mummy play the toys!"

My little nap was over before I even dozed off. 😂

We moved on to play with her Peppa Pig magnets.

She was looking for the third duck magnet, the smallest one of the three ducks so naturally it was called "Baby duck".

It was nowhere to be found.

Fortunately she took a nap in the afternoon and I was able to sleep too before my family came over to celebrate two of my sisters' birthdays.

The little boss was looking forward to seeing her aunties! She kept saying to me, "Da-yi, Yi-yi, Yi-yi, Ah-ah, coming!" 😄 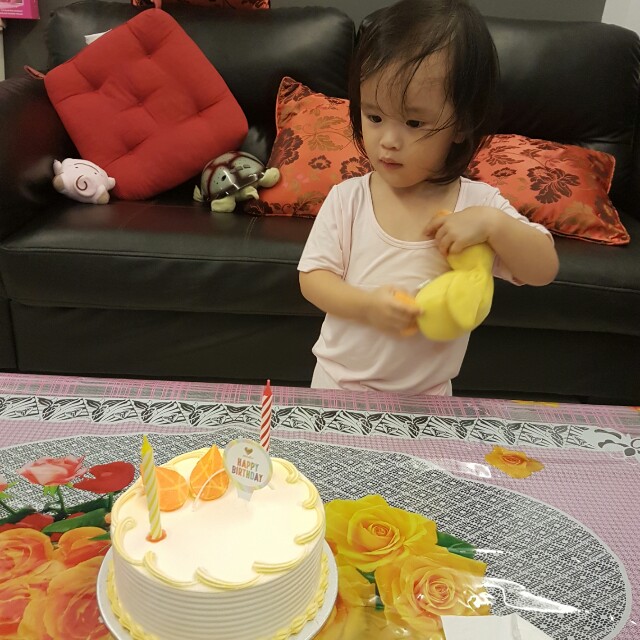 She couldn't stop staring at the cake. 😅😁 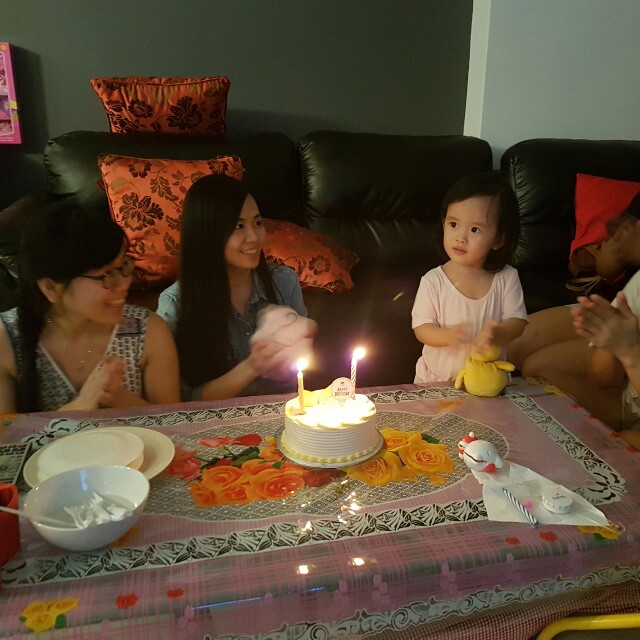 She was the one putting the candles into the cake. And she even tried to blow out the candles. 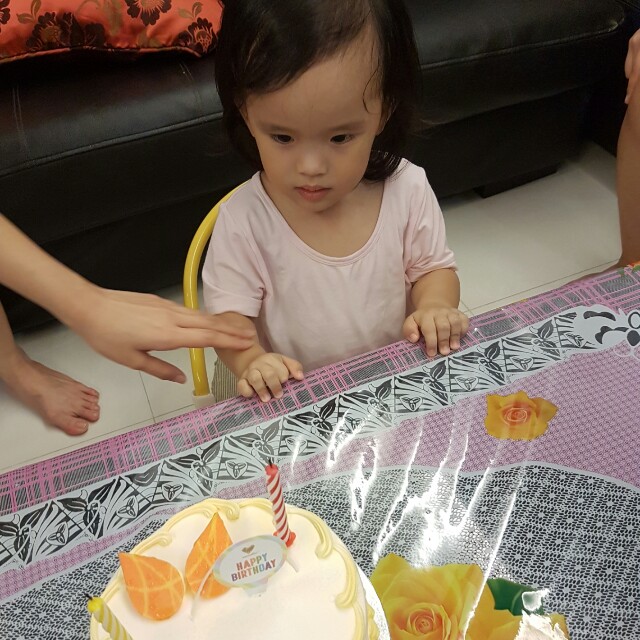 When it was time to cut the cake, she immediately pulled her chair and sat down to wait for her share, watching intently and swallowing her saliva as I divided the cake. 😅
#tamjiak

My mom said she's just like me when I was young. I'd be staring longingly at the cake while everyone's looking at the camera. 😂
Can't deny it because there were lots of photos evidence and it didn't matter if it was my birthday or not.
The apple doesn't fall far from the tree. 😂😆 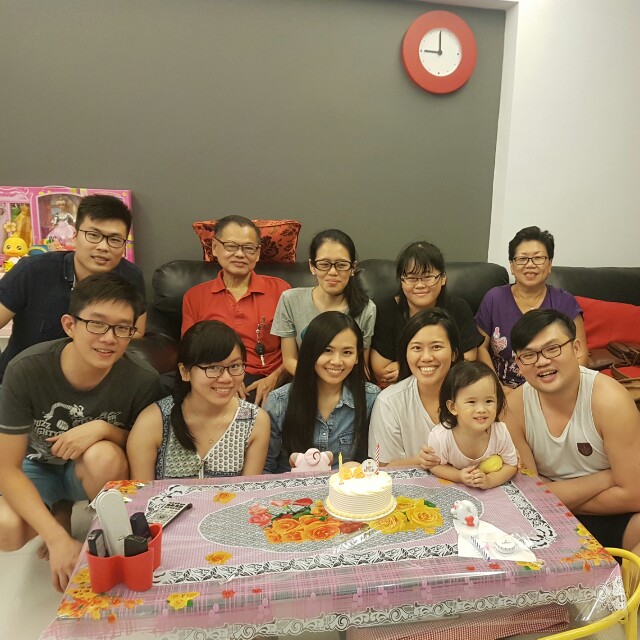 She started out shy but revealed her cheekiness soon enough.

When it was time for her to get wiped down and changed, she kept telling me that she "Want say bye-bye", and even stood at the door to wave goodbye to everyone.

Her fringe is getting too long so Daddy barber shop opened for business this morning.

She insisted on choosing her own outfit after I gave her a shower.

I'd already put on a t-shirt for her when she saw the shorts our helper prepared.

"I don't like this one," She said, and got me to carry her so she could choose another pair of shorts.

She took the shorts and picked up a camisole.

Insisted on changing out of the t-shirt. 🙄

We left for my in-laws' place shortly.

The lift door opened at one of the floors, and a lady walked in.

This little girl pointed at the lady and said to me:

We pretended not to hear her and nearly started whistling.

We were early to the swimming lesson and she didn't want to wait outside.

Stood at the deck and looked longingly at the pool while waiting for the previous lesson to be over. 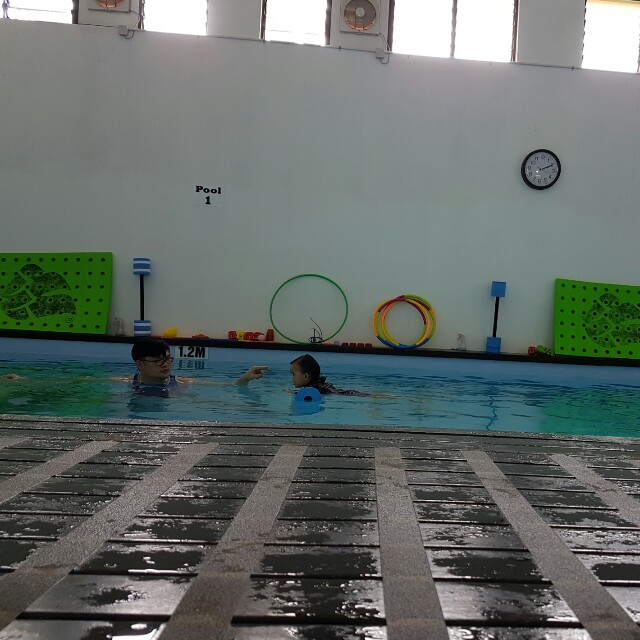 I think Daddy was telling her to look up and stop trying to drink the water. 😂

She got off the pool and showered happily.

Peed while getting changed. Second time in a row. 😐

And then she insisted on hugging her socks and shoes and refused to put them on. Full on tantrums.

Half coaxed and half dragged her out of the school using my phone as a bribe.

I spoke to her in the car.

Anyway I couldn't figure out why she was so reluctant to put on her shoes and socks, because we've never had problems getting her changed after swimming.

But the hubs pointed out that wearing shoes and socks meant no more swimming.

We asked her if that was the case and she said, "Wear shoes cannot swim." 😂