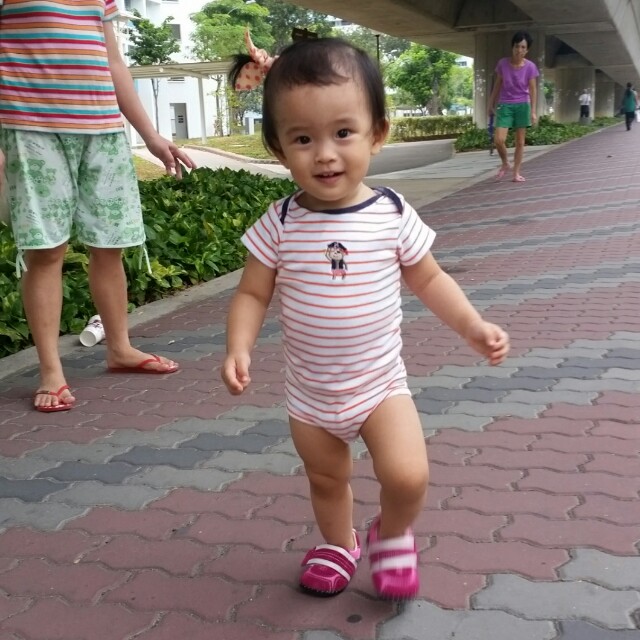 Little miss breakfast girl was out early in the morning to get breakfast. 😁

She slept with us last night and got up at 630am. She had milk and tried to go back to sleep but couldn't.

So finally at 8 I decided to take her out to get breakfast with our helper while the hubs slept in a bit more. 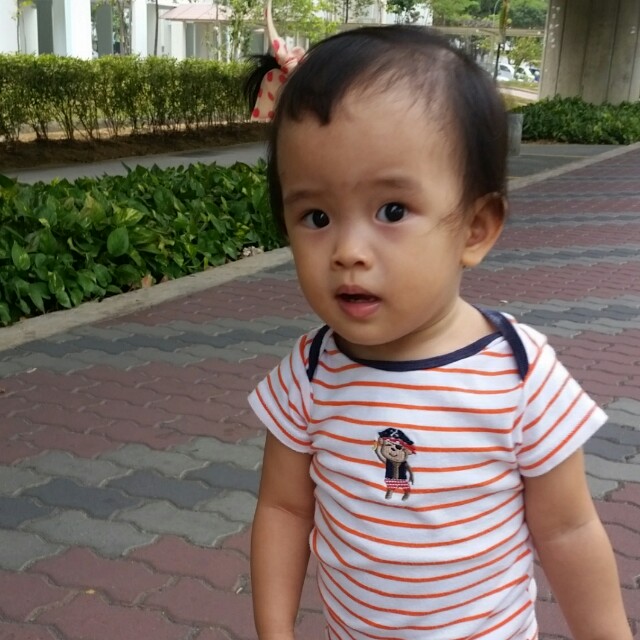 She stopped by the running track declaring, "Aunt! Aunt!" and then turned around to ask us, "Weh?"

She was looking for the big fat red ants she saw yesterday, crawling at the other side of the track.

But they were nowhere to be found today. 😂

This is one word that she can not only pronounce quite accurately but also use in the right context.

She knows that "Up!" is the motion where Daddy lifts her up and brings her down, when they play and when they were in the pool.

Last night she made me sing the part of "Wheels of the bus" where the people in the bus go up and down, up and down.

She held her duckie soft toy with both hands, and lifted it up above her head whenever I got to the "Up!" part of the song.

I love this talking phase.

She also uses the word "hot" correctly, but always in two syllabus.

Either when she's eating porridge and she'd push the spoon away exclaiming "Hor hor!".

Or after a shower when we wrap her up in a towel while putting on her diaper. She'd fling the towel open and declare, "Hor hor!" 😅

In her defence, it really gets quite hot in her room when we're changing her because we turn off the fan .

She also speaks a lot of other gibberish Minionese which sounds like Thai to me and I can't make out what she's saying.

She calls her Xiao-yi (小姨) "Ah-ah".. which really has linkage to neither "Xiao" nor "Yi". Methinks she's probably trying to say "Ah-yi".

She also refers to a certain someone (or something) as "Ah-guem".
I have no idea who / what it is.
This is the next mystery to solve for. 😅