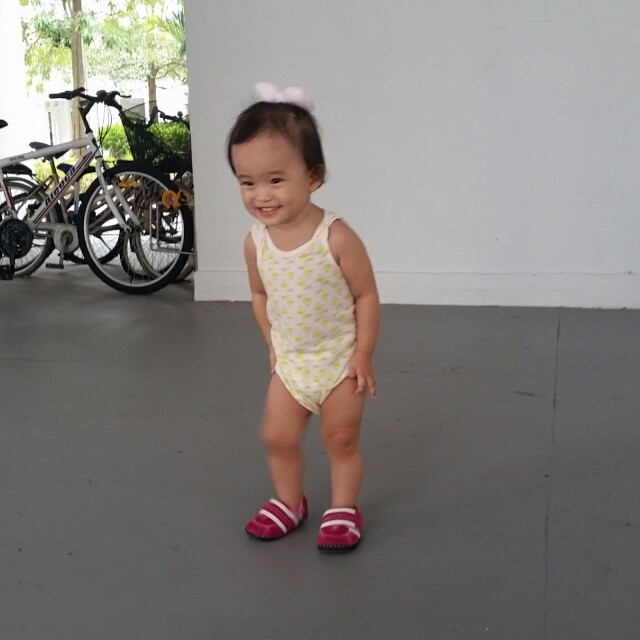 Very happy to see birds at the void deck lol.

She's onto her second pair of walking shoes!

Her feet are now too big for her previous pair and one side has a hole because of her big toe poking through. 😅

I'd initially bought a bigger size with a different design but the fit wasn't good so I went back to get an exchange. For the size I wanted, designs were limited so I ended up getting the same one but a size up.

I don't mind, because I really like this pair.

This morning we finally let her put on the new pair to go out for breakfast.
As she waved goodbye to our helper at the door, she saw our helper holding on to the old pair. I was asking her to wash the shoes so we can keep them away.

The look of bewilderment on Clarissa's face was priceless. She saw the pair on our helper's hands, looked down at the pair she was wearing, and looked up again at the old pair.

I could almost see her thought bubbles.

Sorry Mommy prefers to stick to things she likes.

About the movie
*Spoilers alert*

I realised I really got the title wrong in my previous post. 😂

I didn't fall asleep! Even though as the movie started, I turned to the hubs and said, "Good night!"

They could've removed an entire section and the story would still have made sense, perhaps even better sense.

I guess it was also because the conflict wasn't a very strong nor convincing one.

There was no actual encounter with Superman that could have led to that much disdain or hatred.

And for all the so-called hatred they tried to build up, the resolution was far too easy. If you hated someone all this while, would you suddenly stop hating him because.. your mothers have the same name?

Although the hubs did his best to explain why (after the movie), I still don't buy it. 😂

In any case this epic fight between Batman and Superman could have been avoided if Superman had shouted, "My mother Martha is held hostage!" right from the beginning.

And Batman would have crumbled at the word "Martha" instead of launching a big fight which amounted to nothing anyway.

They could have just hugged and shook hands and fought the big bad guy together, and let everyone go home earlier. 😂

We got home at nearly 2am.

The little one was sleeping in the cot with one leg raised up high against the sides and one arm sticking out.

There is something funny yet endearing about the way she sleeps. 😁

We took turns to shift her before we went to bed.

I heard her say "Yaya!" very excitedly this morning.. before 6am. I was too tired to get out of bed but thankfully she went back to sleep after her morning feed.

Got up at 7ish and finally 8am when my mom dropped by with a new bathtub.

Recently this girl developed a sudden aversion to stepping into her bathtub.

The same bathtub we had when we got married (Hahaha #kiamiam) and the same one she used since she was born.

We figured it might have been the dragons at the base of the tub. Maybe she thought they were snakes.

She'd refuse to even step into the bathtub and we had to bathe her from outside the tub. I've tried all ways to put her in but she'd automatically curl her legs up and refuse to stand or sit in it.

She was slightly better yesterday when I bathed her, but she was standing very very stiffly in the bathtub and grabbing onto me for her dear life.

I tried to wash her as quickly as I could, but she wanted to step out of the bathtub before I could finish. 😂

The new bathtub is simply blue with no prints and no snakes. She kept wanting to go in (but still standing, not sitting) and protested when it was time to get out.

We took Clarissa for her first swimming lesson today and it went very well!

We immediately signed up for the new term. 😁

Waiting for the class to start.

I didn't want to take off her swimsuit to put this on.

"Mommy can you please tell me why we are waiting?"

Blurred picture despite using a proper camera. She leaned too close to the camera lah. 😂 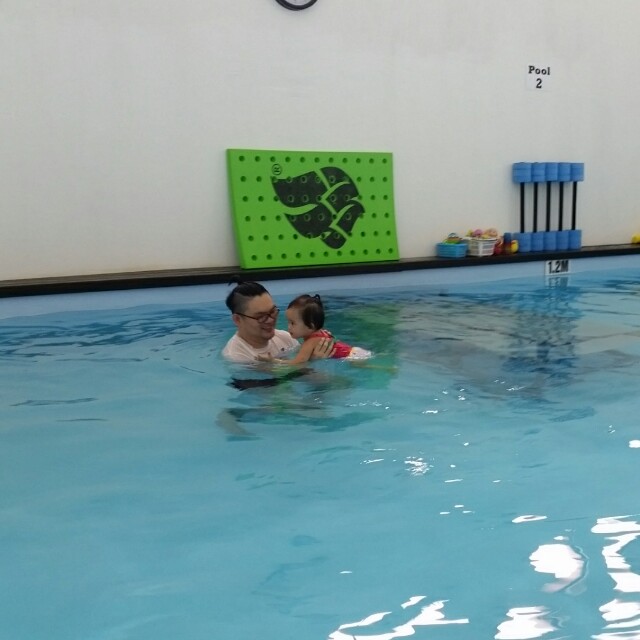 They started with a very simple warm-up: Floating and kicking around the perimeter of the pool.

And then the teacher got her to get used to the water by spraying water down her face.

This facial expression came before the water touched her face. 😂

She had no issues with it at all; it was just that her look of anticipation was a little exaggerated and a little funny.

On to tasks like retrieving toys that were floating around and putting them back into the basket.

Before dunking her head into the water.

Both of them did so well! 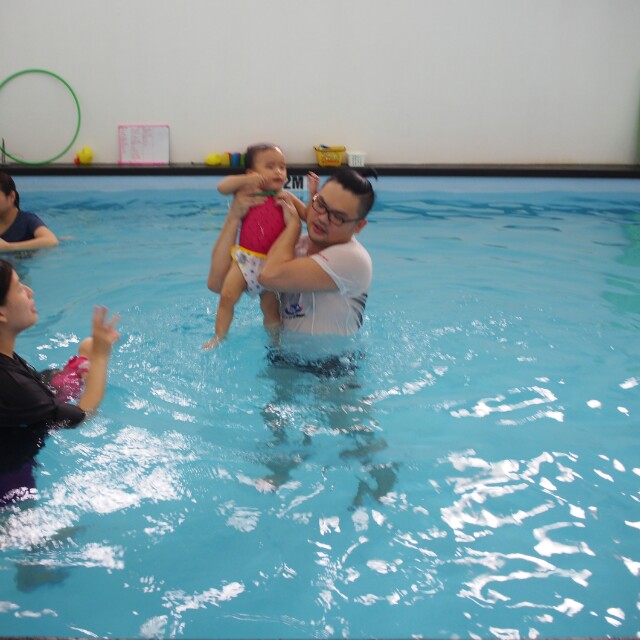 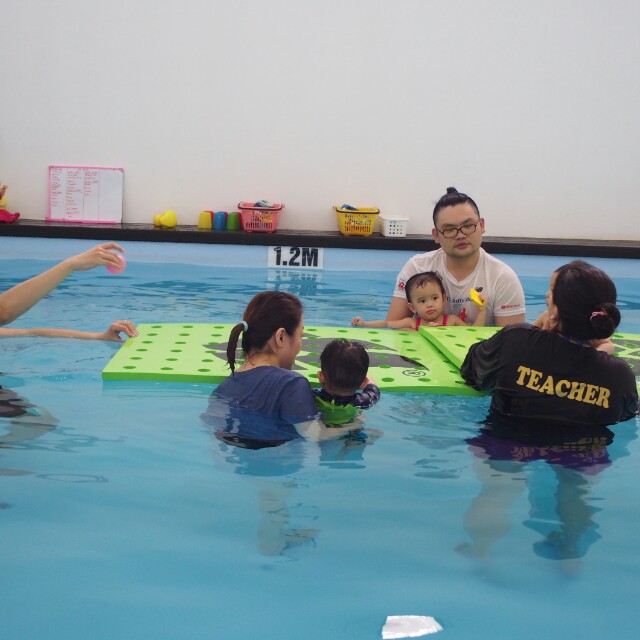 This was the segment of the class where the kids were supposed to walk or crawl from one end of float to the other end where their parents waited for them, and then jump into the water.

I looked at the hubs and shook my head, quite certain that she wouldn't do it. Because when we were at the baby gym she refused to do anything of this sort, especially when it meant having a stranger hold her hand.

But the hubs looked back at me and nodded. He was telling me she would and could do it.

Since it was her first time, the teacher said she would take her turn after the two boys had theirs.

As one of her classmates sat on the float chilling despite people around him cajoling him to move towards his dad, I caught little miss helpful/bossypants pointing her finger at the end of the float, signaling to him, these adults are asking you to go over there!

Too bad I didn't manage to snap a picture of her doing that.

I was busy laughing at this newbie trying to "help" a regular.

When her turn came, she paused for a moment and then took her teacher's hand and walked across the float into Daddy's arms and into the water without much hesitation.

I am so proud of her! 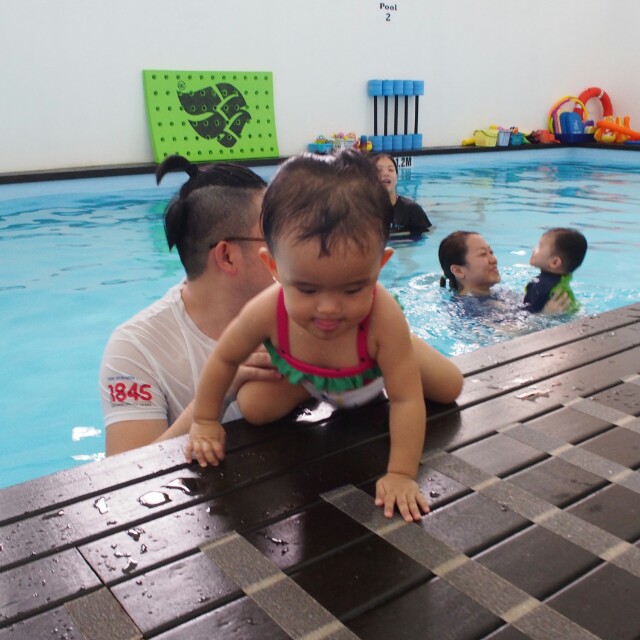 They were also taught to climb up the ledge on their own before jumping into the water again.

I took a video of her doing that.
She clapped her hands to congratulate herself after she managed to pull herself up and we said to her, well done!

(Too bad the videos I took were in .mov format and I need to convert them into mpeg or mp4 before I can edit them. Dayre allows 15 seconds max, otherwise I'd have to upload them on YouTube first. Let me figure this out? 😂) 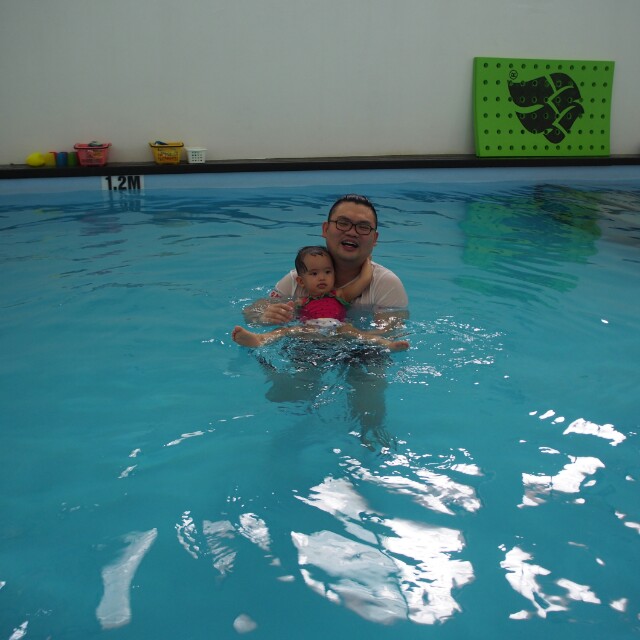 All in all we think she had a great time.

Look at how relaxed she is, one hand around her Daddy like an expert, and her face looking so shiok lol.

I can do this every week!

After the class ended, we took her down to the changing area.. and she wanted to go up the stairs to the pool! 😁

We didn't even have to discuss if we should sign her up for a full class term. I think the hubs just walked into the office to check the prices.

I guess this is what we both want for her. To do something she enjoys and feel happy and confident while doing so. 😊