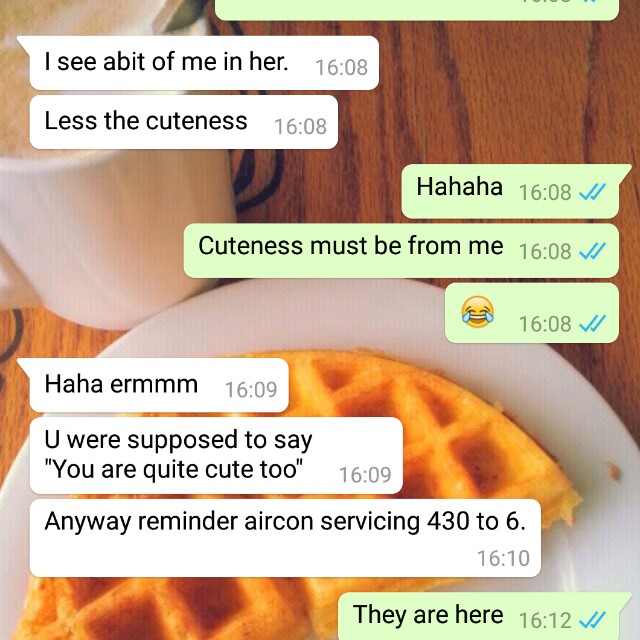 The things we talk about. 😅
Not referring to the aircon servicing please. 😂

It's another work-from-home day today. It's a slower week because of the holiday this coming Friday.

Hopefully this compensates for the crazier weeks ahead and the 2 weeks of traveling thereafter. Don't think it would but I'm just trying my best.

My mom dropped by for a short while this morning and Clarissa was all thrilled and affectionate (in her own way).
But when Grandma said goodbye, this little girl waved goodbye and immediately wanted to close the door. 😅

She then took a nap and woke up slightly before 12pm.
Greeted me "Mama!" ever so brightly as I carried her out of the sarong.

I wanted to let her play in the living room but she led me into my room instead, walked to one of my tshirts which I left hanging by the window, and signaled for me to get changed.

Hahahaha what!!
I always change into a tshirt before heading out so I guess that's her new way of requesting to go out.

So I brought her to the supermarket nearby for a quick grocery run.

On our way home, she spotted a man from a distance away wearing the exact same singlet her Daddy always wears at the home.

She looked at me and whispered a somewhat bewildered "Baba?"

I laughed and told her not everyone wearing that singlet is Baba ok? 😂

My dad dropped by in the afternoon, and it so happened that the little one refused to drink her milk.

It was three hours since lunch time and she'd usually drink some milk before taking another nap.

So he cajoled her, carried her, and tried to feed her but she only took a bite at the teat and pushed the bottle away.

He got our helper to transfer the milk to her dippy cup and pretended to drink from it.

She took two sips and rejected the sippy cup thereafter. 😂

The power of Clarissa.
I don't think my dad ever tried that hard to make us drink or eat. 😂

I told the hubs about it, which was what sparked the conversation about her being like him, except the cuteness.

She is an interesting girl.

Last night she accidentally knocked into my head and I pretended to cry.
At first she ignored me and continued watching TV, so I "cried" even louder.

She'd usually reach over to "sayang" me so it felt really strange that she was just watching TV.

I stopped the fake crying, turned to look at her directly and realised that her eyes were red with tears filled to the brim. She was pursing her lips together and trying not to cry out loud.

Oh god. It shocked both the hubs and I, and I quickly hugged her.

The same thing happened a few days ago when the hubs pretended to cry in pain and she burst into tears and sobbed uncontrollably.

So it looks like we have a very sensitive girl here. Sensitive but cheeky. Obliging yet stubborn.

Going out for the third time today, with Daddy this time.

I brought her to the playground after I finished work.

There were two older girls playing and running around.
This little girl unabashedly shouted, "Eh! Ahhh!" and chased after them like they were her old friends. 😂

They pretty much ignored her because she really looked like a baby beside them. (They look like they are at least 3 to 4 years old.)

Eventually I brought Clarissa over to them to let her say hello.

The girls said hi back and it was time to go home.

Little miss outgoing refused to push the button for the lift and kept pointing in the direction of the neighbourhood cat, like she was insisting, "But Mommy, we haven't seen the cat yet."

(Erm, actually we did, on the way to the supermarket earlier.)

I scooped her up and entered the lift anyway. As the lift door closed, she waved goodbye to the outside world wistfully. 😂