Out of the blue last evening, this little girl took her minion pillow, placed her head on it and made herself comfortable.. In the middle of the living room floor. 😂

At one point she even started swimming with her arms!

And then it's Monday..

Someone wasn't too pleased about Baba and Mama going to work.

We are now looking at this picture and thinking, she's such a big little girl now.

Complain complain but still come back to this. 😅

Higher chance of success today that the food would be as good as the coffee.

A toast a day keeps sleepiness away.

Verdict: Too much for me to finish, but the watercress soup is decent.
Can't go wrong with soup!

Over lunch, I received a message from sis#5, who told me how she'd casually mentioned to our helper that Clarissa's fringe was getting a little too long.. and then our helper went ahead to cut Clarissa's hair.

She said Clarissa looked even cuter now with the very short fringe.

My first reaction was: ZOMG Daddy might be angry!
(Note: He's very protective over Clarissa's hair. No one can suggest or decide if Clarissa should shave or trim or cut her hair except him. Ok, and maybe me.)

This thought came way before my second thought: So how does she look like now? 😅

So I asked my sis for a picture while sending the hubs a message to preempt him about The Haircut.

As expected he was not happy. 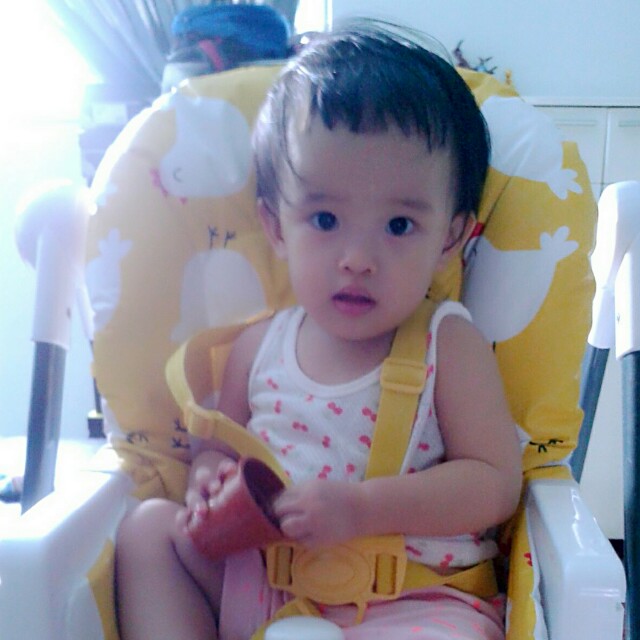 Even after, or should I say, especially after I shared this with him. 😂

I know I probably should not sound so relaxed or nonchalant about it, I know most moms would likely be jumping or raging if someone cut their child's hair without asking for permission.. so I'd definitely speak to our helper about it.

I'm not angry at her for doing this, because I guess it's probably her sense of responsibility and accountability that make her do things like this.

So I guess she also felt it was her responsibility when my sister commented on Clarissa's hair.
(Basically when Clarissa's hair gets too long, she's easily irritated and would scratch her ears because of the itch.)

And then I guess she took it in her own hands without checking with us because:

1) Hair is like nails to her. We would tell her when we find Clarissa's finger nails getting too long, and she'd find time to cut them.

2) We were not at home for her to check with us. In fact we are often out for at least 12 hours every weekday. That's 12 hours of intermittent scratching.

3) Culturally there's probably no such saying or thinking in the Philippines as what the Chinese believe: 身体发肤授之父母. Loosely translated, it means that our body, hair and skin are gifted by our parents.

So it probably didn't cross her mind that it is culturally unacceptable for someone else other than the parents to take care of the baby's hair, or that Daddy would mind, very very much.

And hence back to point number 1.

I'd like to be positive and think of it as a happy problem.

At least she cares enough for our child to take the initiative to do something for her. The same reason why she spent her salary buying a writing board for Clarissa, just so she can "start learning to write".

The $20 she spent could have been used to buy a calling card to talk to her daughter, or to get herself a little treat.

But she chose to spend it on OUR daughter, which speaks volumes about how much she cares about her, even though we are but her employers.

Would you buy a present for your company, for no reason in particular?

So yes, I can choose to be angry or upset about it, perhaps I should be, but the truth is, I really am not.

There is a trade-off for everything.

Of course the boundaries have to be drawn and come tomorrow, I still have the task of explaining the hubs' displeasure to her and telling her not to do it again.

I asked the hubs not to say anything because it's her birthday today, her first birthday with us, and I didn't want to spoil her day.

So tomorrow it shall be.

And how should I put it across to her firmly but gently?

If I were to put myself in her shoes, how would I feel if I'd done something out of good intentions, only to be told off for not seeking permission? For something I didn't realise that needed permission?

I guess I have to start by explaining the culture and Daddy's protectiveness that spans everything about his precious girl, including her hair.

Perhaps that's the way to go.