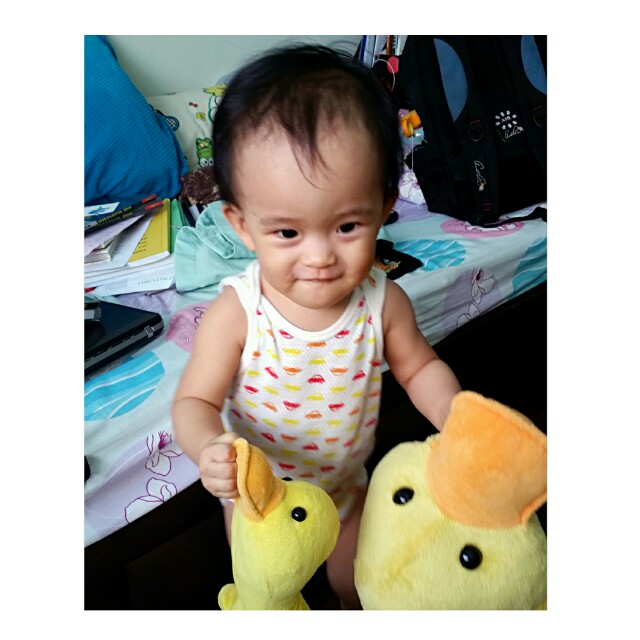 I love watching her play, even though I might not understand her actions completely.

She's getting more confident about walking!

I took 3 videos of her walking.

In the first one, her back was facing me as she walked towards my sister.
She took a few steps forward, paused and turned to look at me for reassurance.
I smiled my brightest and told her she could do it.
She nodded, turned back and continued walking towards my sister again.

She did this a few times before she eventually got to my sister. Each time she looked at me, I felt like rushing over to give her a hug.

It's ok, darling, even if you do not win the race. For we'll always run alongside you, and we'll always be cheering you on.

Took her to the park / playground downstairs this evening.

I let her set foot on the ground with our helper and I taking one side and one hand each.

I wish I'd brought along a proper camera to capture that look of wonder and delight on her face as she took her first stride out, and how she immediately went after a fellow baby she saw on the running track.

Or how she shrugged my hand away so she could point and show me where the trees were.

A little boy ran towards us holding a plastic bag and declared to me, "I'm going to throw this away!"
I laughed and said, "Ok! But be careful!" before he ran away to the nearest bin, his mother following behind.

And this little girl who was holding my hand ran after the little boy too, dragging us along.
The boy ran faster. 😅

We let her lead us to where she wanted to go, and found ourselves standing in the middle of a few kids who were playing with their own versions of a kite.

They looked like they are between 4 to 6 years, much older and very much oblivious to the eager little toddler who was busy running after them. 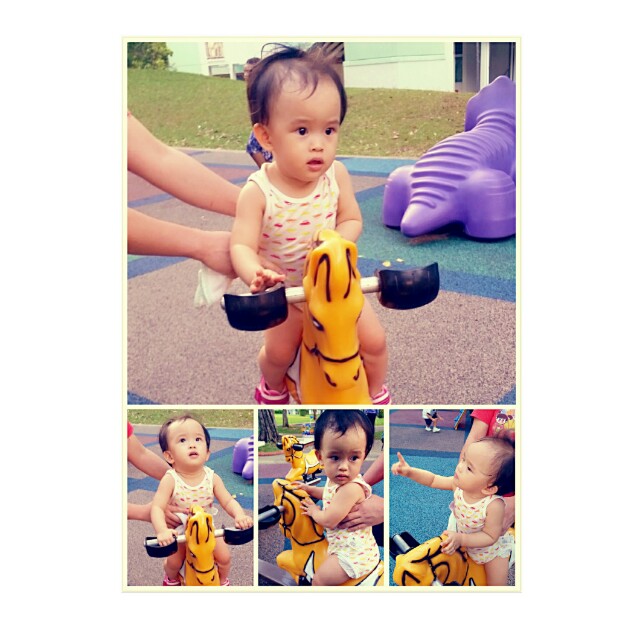 We led her to the playground, and put her on one of these horses.

There were four of these placed in a circle, but I wasn't sure what to do with them.
A boy jumped on to the other end and rocked it.

Ah, rocking horse seesaw. 😅
We kinda figured it out and soon she caught on and started rocking along.

After the horse ride, she went on to check out the dinosaurs.

She took two steps on her own, squatted down slightly when she felt like she might lose her balance, took another two steps and eventually got to the dinosaur.

She touched it, leaned on it, and then relaxed her grip to stand beside it, looking so pleased like she owned the playground.

And then it was time to go.

As we walked past a group of guys playing basketball, she shouted "Bah!" ever so enthusiastically, and even raised one arm like she was doing a slam dunk — a result of watching NBA matches with her Daddy every weekend.

She didn't protest as we walked away from the playground and remained in high spirits even after we got home.

And here I am, looking at the photos again, wondering.

Where did our little baby go?